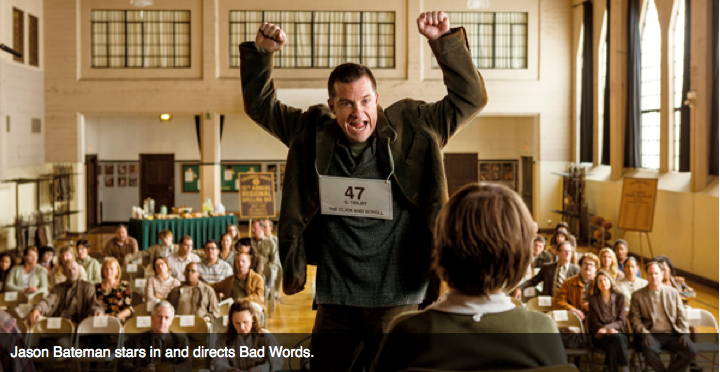 First-time director and star Jason Bateman's new film Bad Words shows promise; most rookie features with a distinctive look and a cast full of capable pros do. But it isn't very funny. Once you roll up your sleeves, reach in, and try to figure out which pulleys and levers in its comic mechanism work and which ones don't, though, the problem of comic analysis spreads out and expands. Trying to explain why something isn't funny is as tough as trying to explain why something is funny.

Bad Words is weird enough from stem to stern that it could have been something. Bateman plays Guy Trilby, a sharp-tongued 40-year-old who has suddenly made it his life's mission to win the Golden Quill National Spelling Bee. The bee (which is meant for middle-school kids) is presided over by Dr. Bowman (Philip Baker Hall) and Dr. Deagan (Allison Janney), a pair of stodgy, hateful authoritarians who more than justify most Americans' mistrust and hatred of intellectuals who aren't inventors, private detectives, or serial killers. As Trilby clashes with parents, humiliates his prepubescent competition, and wends his way to the nationally televised Golden Quill finals, he repeatedly crosses paths with Chaitanya Chopra (Rohan Chand), an overly friendly Indian preteen who decides they're going to be best friends no matter how many Slumdog Millionaire jokes Trilby throws his way.

Bad Words treats both the pasty, glabrous spelling bee contestants and their pushy, monomaniacal moms and dads with disdain and contempt. The film's baggy, meandering structure leaves plenty of space for scenes where Trilby wages crude psychological warfare on everyone he sees. But none of his victims ever have a sporting chance; each encounter is as unfair and exhausting as watching a parent stand near his kid's TotSports Easy Score Basketball Set all day, swatting away shot after shot.

Unfettered, id-driven cruelty is Bad Words' currency, and it is reinforced by the film's unusually mannered visual scheme. Trilby's quest is set in a greyish-brown and grungy-looking dystopia where everything seems tainted with mud and despair; it's as if Bateman taped together dozens of grainy, decaying ends of film stock from the 1970s and then cleaned them up by dunking them in a creek before shooting.

But the visuals are in some ways the strongest, surest sign of Bateman's talent. Unlike most live-action filmmakers, he knows how to set up a sight gag. There's an exuberant slow-motion passage with Trilby, Chopra, and a lobster, and there's a moment of synchronized door-slamming in long shot that belongs in a zombie movie directed by Jacques Tati.

And Bad Words pulls off something I haven't seen in a comedy for a long time: It saves its funniest scene for last. As far as big-game switcheroos go, the final round of the Golden Quill tournament is not as memorably counter-intuitive as the finale of last fall's Rush or 1996's underrated golf saga Tin Cup. It ain't bad, though, and it leaves a mark.