Best New Reason To Go Out To Eat

More than a pound of trash is produced for every restaurant meal served, but more than 95 percent of restaurant waste can be recycled. So Margot McNeeley decided to do something about it.

Now if only someone would start Project Green Bar to deal with all the beer bottles. — Mary Cashiola

In Sputnik, Masked Men, and Midgets, Ron Hall has produced a photo album that documents the early days of Memphis wrestling, when men like Sputnik Monroe and Jackie Fargo were the rock stars of their day. Packed with wonderful images, it even includes a CD of songs performed by famous wrestlers from the 1960s. Well done, Mr. Hall.

Rhodes College graduate Nick Lewis completed the astonishingly difficult Leadville 100-mile overland run in August, at elevations of up to 12,800 feet in the Colorado Rockies.

Correction: He didn't merely complete the race, he finished second, in a time of 17 hours and 44 minutes, a mere 17 minutes behind the winner.

Only 271 of the 504 runners who entered the race made it to the finish. Needless to say, you don't even enter such a race unless you are in phenomenal physical and mental condition.

Lewis, 23, started in darkness at 4 a.m. and finished in darkness nearly 18 hours later in the sixth fastest time ever for the Leadville. He battled 85 degree temperatures, altitude sickness, steep climbs to a 12,800-foot pass, "the twilight zone" where your mind starts playing tricks on you, and a whole lot of rocks. With 40 miles to go, he thought he was done and flopped down in a stream for five minutes. It revived him, he swallowed a salt pill, ate an energy gel, and got back in the race. He estimates that he consumed 12,000 calories that day in the form of drinks, gels, fruit, and peanut butter and honey sandwiches.

Lewis, who works at Breakaway Athletics, is only 5'-3" tall and weighs 110 pounds. He ran track and cross-country at Rhodes, but until last year all of his running was at low altitude and not more than 50 kilometers (or 31 miles). Three weeks before the Leadville race, he started training in Colorado. He's hooked on "ultras" now and expects to compete in Colorado and California later this year. 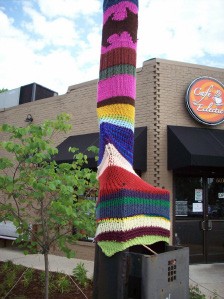 Best Reason To Pick Up Your Knitting Needles

Last spring, the Memphis Knit Mafia marked their turf with their own brand of graffiti: a colorful "pole cozy" outside Café Eclectic in Midtown.

The group, who say they're younger, more liberal, and have dirtier mouths than their traditional counterparts, meet every Tuesday to knit, purl, and spin a yarn or two.

As for more knitted graffiti, be on the lookout next month.

After Mayor Pro Tem Myron Lowery's ill-advised fist-bump with the Dalai Lama, the following message was on Twitter: "If I met the Lama, I wouldn't greet him with crude gestures. I'd do the honorable thing and extend him the Zambodian penis of friendship."

That's only one example of the twisted madness of the anonymous wit who posts under the name "FakeMongo" on Twitter. I don't know who he is. I'm not sure I even want to know. (Yes, I do.) But you have to admire the man's comic genius. I just hope he hangs around after the election. A few more examples:

"Says here in the city bylaws the mayor has to wear a shirt at all public events where booze is served. Checkmate, Mr. Lawler."

"Show me on the doll where the mayor touched you, Mr. Lama."

"Enjoying some flash-frozen gamma locust with Severed Head of Charles Carpenter. Wish we had some honey mustard for dipping!" — Bruce VanWyngarden

Granted, San Francisco passed an ordinance protecting employees on the basis of sexual orientation in the 1970s. But hey, Shelby County was better late than never in passing its nondiscrimination ordinance this summer that protects gay, lesbian, bisexual, and transgender county workers. After contentious debate with right-wingers on the county commission, the wording was dumbed down to not specifically mention the phrases "sexual orientation" or "gender identity." But Commissioner Steve Mulroy's original intention for the ordinance remained true. Look for a similar debate to go down with the Memphis City Council after the October mayoral election.

To an unsuspecting motorist, the brick facade next to the new Chick-Fil-A on Union Avenue may look a little strange. But preservationists scored a major victory by convincing the fried-chicken chain to save a piece of the Cumberland Presbyterian Church building that once stood at that site. The original structure was built in 1951 to serve as headquarters for the church. Chick-Fil-A on Union opened in mid-September, and the southwest corner of the Cumberland building now serves as the border of a unique outdoor dining space. — Bianca Phillips

Okay, the harnesses are not the most flattering accessory, but how better to impress a girl (or guy) than skittering up Bridges' 35-foot climbing wall like a spider monkey?

When Bridges opened its 40-foot ropes course and rock wall, it was used during training programs for school and corporate groups. But now the rock course is open to the public once a month during Climb Nights.

For $15, you can scale the wall as many times as you want, which, granted, might just be once. But with the adrenaline pumping, the little bell at the top waiting to be rung, and a belayer from Outdoors Inc. controlling the rope, what have you got to lose?

A local hero as long as he was winning, smooth operator John Calipari revealed himself en route to bluegrass country, taking most of his heavily anticipated University of Memphis recruiting class with him to Kentucky and leaving a scandal in his wake. Calipari became the only coach in college hoops history to have Final Four appearances vacated at two schools — in both cases, after he'd jumped ship to a new gig.

Even if he's on the downside of his career at age 34, former NBA MVP and scoring champion Allen Iverson is still one of the four or five most famous basketball players on the planet. Though he's not the best player in Grizzlies history, he's certainly the biggest star, something reflected in the ticket sales and merchandising bump the struggling franchise got upon his arrival and in the hundreds who came out to Iverson's public press conference.

That some of those excited civilians played media (grabbing the mic to ask "the Answer" some questions) and dignitary (strolling to the dais to make a speech and present Iverson with a gift) probably wasn't part of the plan. But it's appropriate that the Iverson era has been hugely entertaining — and a little wild — even before he's set foot on the court. — Chris Herrington

The shows at the Levitt Shell in Overton Park: They are free, parking ain't no big thing, it's casual, kids can dance and run and play, and the music is across-the-board and excellent. — Greg Akers

The club sandwich at Frank's, a no-frills deli housed in a former South Main liquor store, has a narcotic effect. It provides the eater with a sense of well-being and produces mild euphoria. It makes you tingle all over and love your fellow man. This overstuffed gift to humanity consists of chunks of house-smoked turkey layered with thickish slices of house-smoked ham, smoked cheddar, bacon, lettuce, tomato and a smear of mayo on crispy grilled bread. It makes you want to be a better person.

If we dropped these instead of bombs on America's enemies, we'd have no enemies. And everybody would be too fat and happy to fight anyway. In case you haven't gotten the point yet, this is a damn fine sandwich. — Chris Davis

For almost two decades, News Channel 3's Knowledge Bowl has been a fixture on local Saturday-morning television, nestled among the cartoons and outdoors programs. Each week during the school year, the trivia show pits two high schools against each other in a competition that is no less riveting than a Friday-night gridiron spectacle. The kids vie for scholarship money and bragging rights for biggest nerds. Respect. — Greg Akers