Can Disney Revive The Force?

It's been 15 years since George Lucas' Star Wars: The Phantom Menace brought back the beloved franchise that changed the face of film, both for good and bad. The three prequels, including Attack of the Clones (2002) and Revenge of the Sith (2005) continued the Star Wars tradition of impeccable production design, layered references to classic films, and groundbreaking special effects. They also continued the traditions of wooden acting, and introduced twisty, incomprehensible plots to a franchise that even its detractors would admit had been models of clear storytelling. Lucas, the man with the golden touch in the 1970s and '80s, had seemingly lost it, and was producing films only a slavering fanboy could love. They kept showing up, but they vented their increasing frustration and derision online.

The nadir of the franchise (not counting the 1978 Holiday Special) was the 2008 animated movie Star Wars: The Clone Wars, which was then spun off into a weekly TV series that appeared to be set up to be just as dismal. But a funny thing happened over the show's six year run. As Lucas slowly lost interest and turned the show over to show runner Dave Filoni, it got better. Perhaps this should not have been a surprise, because Lucas has always been a better producer and world builder than director. The best film in the franchise, The Empire Strikes Back, was written by Leigh Brackett and Lawrence Kasdan and directed by Irvin Kershner, a journeyman director whom Lucas met in film school. Lucas' original intent had been to turn over the universe he created for other directors and writers to play with, something he had forgotten when he was filming his first drafts at the turn of the century. Star Wars' DNA is rooted in Flash Gordon serials, 30-minute long cliffhangers that played to preteens in the movie theaters of the 1930s and 1940s. So the serialized format of The Clone Wars, complete with Tom Kane's booming "In our last episode..." voiceover, turned out to be a perfect fit for Star Wars. 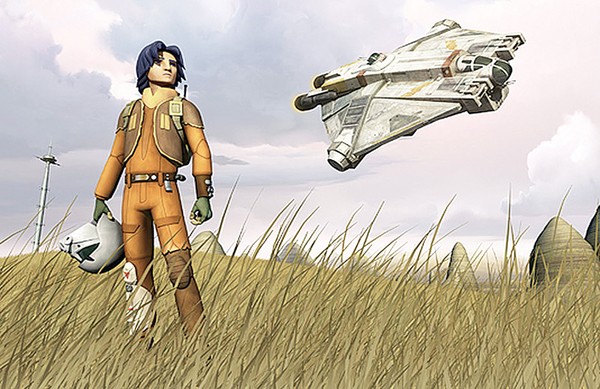 The voice work of Matt Lanter turned out to make for a more compelling characterization of Anakin Skywalker than either Jake Lloyd or Hayden Christensen had managed in the prequels. And most importantly, Anakin's apprentice Ahsoka Tano (voiced by Ashley Eckstein), a character who had started as a badly written audience surrogate, evolved into Star Wars' best female character since Princess Leia. The prequel's Padmé Amidala was just a damsel in distress, wasting Natalie Portman's talent. But Ahsoka was a capable, intelligent, rounded character who became the only one to see through Palpatine's deceptions and walk away from the corrupt Republic before the Jedi Purge.

But then, in 2012, Disney bought Lucasfilm for $4 billion, and the first thing they did was cancel The Clone Wars. Fans were torn. On the one hand, they had lost confidence in Lucas. On the other, it's Disney. Boba Fett is not Bambi. But now, with the news filtering out of the ongoing, J. J. Abrams-helmed Episode VII taking on a generally positive slant, we have the first concrete evidence of how the future of Star Wars' universe will unfold: The premiere of the new Star Wars animated series Rebels.

Set 15 years after the Jedi Purge, Rebels' pilot is centered around Ezra Bridger, a 14-year-old street urchin from the Outer Rim planet Lothol. Trying to rip off the Stormtroopers who are occupying his planet, he inadvertently ends up in the middle of another, bigger heist by a pirate named Kanan Jarrus and his crew of misfits. Eventually, Ezra realizes that the crew of the starship Ghost are not mere criminals, but nascent guerillas. In a climactic fight, Jarrus is revealed to be a surviving Jedi. He recognizes Ezra's wild Force talents and offers him an opportunity to become something greater.

Rebels borrows heavily from Joss Whedon's series Firefly, which is kind of fitting since it borrowed heavily from the Han Solo mythology. Under the direction of Filoni, the characters, who include two prominent female roles, are encouragingly Jar Jar free. The animation is evolved from The Clone Wars' 3D computer rendering, which is frequently gorgeous, even as it works to stay out of the uncanny valley. And best of all, future episodes promise a return of Billy Dee Williams as Lando Calrissian. Count me among the cautiously optimistic.