State of the State

Lee concentrates on four areas of government; gets good response from GOP super-majority.

NASHVILLE — Tennessee Governor Bill Lee delivered his first State of the State address Monday night in the House chamber of the state Capitol to an enthusiastic audience composed overwhelmingly of representatives and senators belonging to the current Republican super-majority.

In a State-of-the-Union-like format involving several nods to individuals, symbolic of his themes, seated in the balcony, the governor stressed four major aspects of state government: education, the criminal justice system, health care, and governmental economy.

His two key points regarding education were his support for "education savings accounts" (ESAs), voucher-like outlays to reinforce what he sees as necessary educational "choices" for parents and for stepped-up backing of charter schools as a means to the same end. Apropos the ESAs, Lee promised to infuse the existing public education system with an additional $25 million by way of balance, and to fully fund the state's BEP (Basic Education Fund), conspicuously underfunded in recent years. 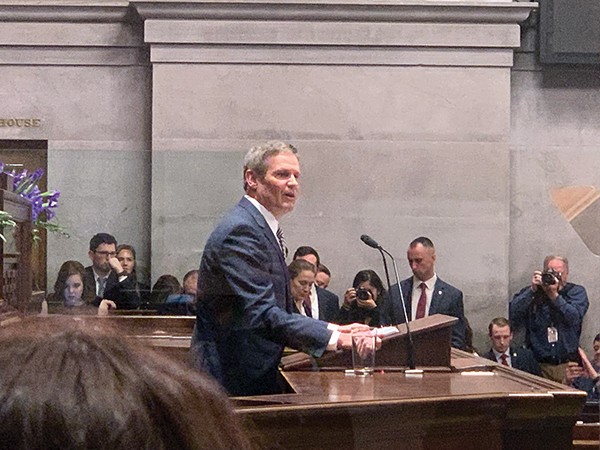 As he has indicated previously, Lee is proposing a package of criminal justice reform that, he says, would maintain "swift and severe" justice for violent offenders but ease and assist the re-entry of nonviolent offenders into society and reduce or eliminate the costs of their efforts to expunge their criminal records.

Lee's prescriptions to improve health care were somewhat piecemeal, involving such matters as more money for medical instruction and for safety-nut funding in rural areas, and task forces to deal with suicide prevention and mental health.

Finally, the governor promised "that government [will] be operated with integrity, effectiveness, and as little cost as possible." (Governor Lee's complete remarks are posted on the Flyer's "Political Beat Blog.")

Memphis state Representative Karen Camper, the Democrats' minority leader in the House, rebutted the State of the State in an event held later in the Old Supreme Court Chamber in the Capitol. Most notably, she took Lee to task for shying away from embracing Medicaid expansion, maintaining that the failure to do so is somewhat responsible for the current rate of hospital closures and the consequent delay in response time for medical emergencies in the state's hinterland.

• The campaign for positions in Memphis city government is well under way, and we will make an effort to document them.

One of the most serious coming-out events of late was a reception/fund-raiser held last Thursday evening at the home of Lisanne and Tom Marshall in support of Jeff Warren, a physician and former long-term member of the former Memphis School Board. He is now a candidate for the Super District 9 position on the council being vacated by Reid Hedgepeth.

Warren's bent, as he indicated on that board during the tempestuous period leading to the ultimately abortive merger of city and county school systems, was to try to reconcile the contradictory positions of others. That aim proved to be beyond his, or anybody else's, ability during the pre-merger period, when he resisted the Memphis board's majority in favor of surrendering its charter.

In any case, Warren has fairly successfully yoked some unusual companions in support of his council campaign. In his corner at the initial event were numerous representatives of the established local order. Typical was host Marshall, architect of several significant local projects and influential former councilman himself. Jack Sammons, a running mate of Marshall's during their council years and now a groomer-in-chief of council members acceptable to the power elite, was on hand, as were such traditional political patrons as Billy Orgel and Ron Belz.

Warren also would seem to have support among established political liberals. He has enjoyed support in the past from Memphis Congressman Steve Cohen, longtime governmental activist Sara Lewis, and David Upton. He'll also have lots of money. None of this makes him home free, but all of it together is enough to make Warren the candidate to beat.