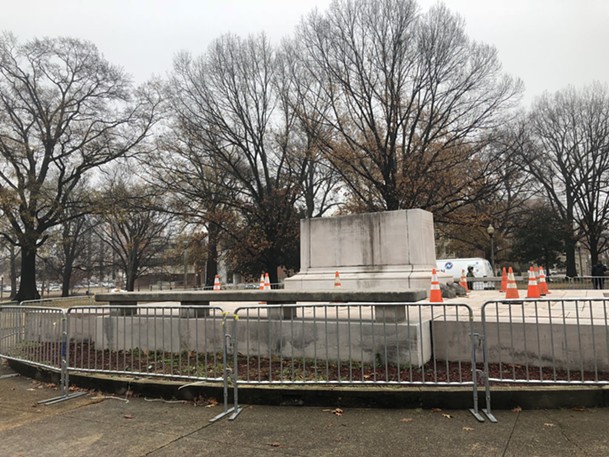 Dawn's first light of 2018 found two empty pedestals where symbols of oppression once stood — and in their place, fresh concerns have grown about the method and processes that emptied them.

Officials at the highest levels of local government toiled in secret harmony over many months to devise the complicated plan that yielded the seamless choreography of the night the Confederate statues came down. The government process is most often likened to the ugly, blood-and-guts  process of making sausage, so anything seamless is an improvement.

The Memphis City Council publicly heard plans, options, legal opinions, and more for weeks, as the ordinance to remove the statues moved through the legislative and legal process. But in the end, council members unanimously approved a plan that was never vetted in a public hearing.

During the day of Tuesday, December 20th, government officials began enacting a process that was shielded from the public and the press. While council members went about their daily business at city hall, police readied to secure the parks for the statues' removal. Contracts selling the parks to Greenspace Inc. had been proofed, finalized, and waited only for Mayor Jim Strickland's signature.

When the time came, council member Edmund Ford Jr. brought a substitute ordinance to his colleagues. Surely every council member knew what the ordinance contained and surely each and every one of them had already agreed to it. Because they all approved the new rule without discussion. They didn't read it aloud. They didn't even offer up copies of it to the public after the vote. The public was left in the dark.

We've been supportive of the removal of the Confederate statues numerous times in these pages, but we cannot support the new precedent for the city council to do whatever it wants without any public inspection or input.

What if the council had simply sold Overton Park's Greensward to, say, the Memphis Zoo? The new precedent would have certainly streamlined that process, of which more than one council member complained.

Council member Kemp Conrad recently poked fun at the public's mistrust of the city council. During a discussion of proposed changes to the city's rules for permitting races, protests, and other public gatherings on WKNO's Behind the Headlines, Conrad joked that "It's not like [council member Reid Hedgepeth] is riding around in a black helicopter trying to figure out a way to quash free speech."

But if you wonder why some Memphians don't trust the council, look no further than the vote that brought those statues down.

Experts could argue, perhaps, that the method of the final vote was completely legal. And they may be correct. But is it the right way to govern?

We don't think so. The public has every right to know what their council is voting upon. They earn that right every time they pay taxes and every time they pull the handle in a voting booth.