Of all the gems in the crown of the thriving Memphis music education scene, the Stax Music Academy (SMA) may shine the brightest, by virtue of its location right beside the Stax Museum of American Soul Music. Though it wasn't yet in its current building, the music school opened 20 years ago at Stafford Elementary School and has gone from success to success ever since.


Despite the pandemic, the school is forging ahead with the new academic year, albeit with some new approaches in place. “We're starting virtual,” says executive director Pat Mitchell-Worley. “We're still going to keep the attention on the craft of being a musician, but instead of live performance, we're focusing on recorded performance. And our students get to spend a lot more time in the studio this year, which is something we've always wanted to do, but preparing for all those live performances made it sort of impossible. So this is an opportunity. I want to focus on, what can we do that wasn't possible last year?” One thing they're doing is making up for the shortfall resulting from SMA's suspension of all tuition charges when the pandemic hit. That's the focus of a new fundraiser involving songwriter extraordinaire and longtime SMA supporter Elvis Costello, who is lending his voice to the cause. It's not a recording or a performance, exactly, but a unique art object created by the London- and Austin-based Soundwaves company, which specializes in transforming audio recordings by musical artists, from Fleetwood Mac to Paul McCartney, into visual representations of the recordings' waveforms.


Now, Soundwaves’ Tim Wakefield has created such a work based on Costello’s 1978 classic “Pump It Up,” and produced a limited-edition collection of prints, individually numbered and signed by Wakefield and Costello, as well as four originals. When first offered on July 15th, the originals sold out at $2,500 each, and roughly half of the prints sold for $450 each. Remaining prints are still available. 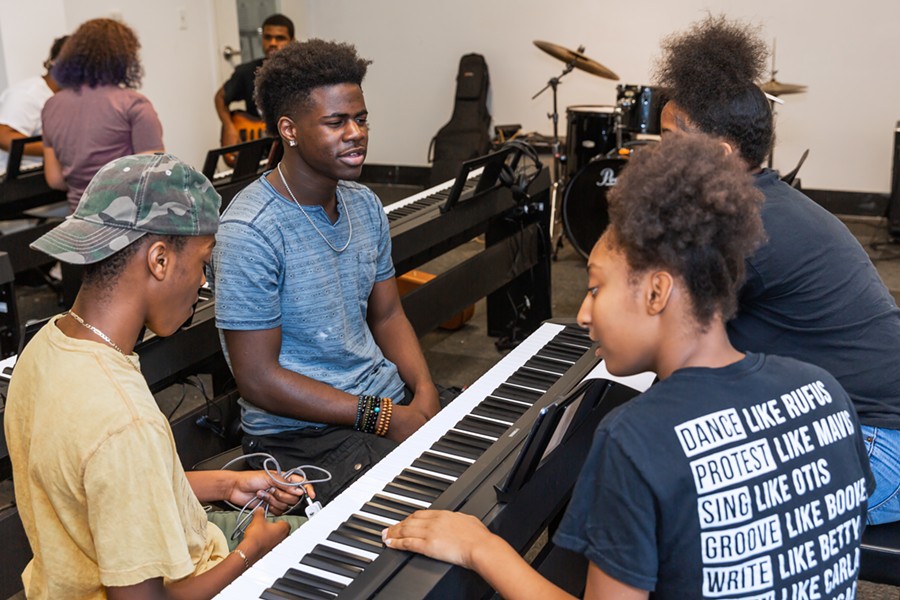 As Costello observed in a statement, “I think this is the first time anyone has paid money to look at my voice. That said, I am really grateful to those who have made these contributions in support of the great work done by my friends at the Stax Music Academy.”


As Mitchell-Worley notes, Costello has often been involved with SMA. “He's met with students,” she says, “and when he was in town last time, he did a testimonial video about the program.” The “Pump It Up” campaign is a perfect expression of that support. “It's something I'm super excited about,” she says, “'Cause it's just a cool thing. I'm like, is it wrong for me to buy one? 'Cause I'm a fan!”


Costello isn't the only musical genius to lend support to SMA. Direct financial assistance has come from a notable Stax alum. “Steve Cropper put up all the money for the cash prizes for kids, for the songwriting contests we're doing,” says Mitchell-Worley. “The next one will be in August, and Cropper's coming again with the prize money. He wants to encourage kids to write songs. He knows how important that was for him.”

The assistance of high-profile artists like Costello and Cropper is crucial now, according to Mitchell-Worley, as the SMA fills in where other avenues of music education have been curtailed due to the coronavirus. As she notes, simply taking a break from playing is not an option. “You've got to keep your skills up,” she says. “It's just like math. If you go without math for a time, then that knowledge is lost. Continuing to practice, continuing to play is an important piece of growing as an instrumentalist and a vocalist.”


After virtual classes begin on August 17th, says Mitchell-Worley, “We're playing it by ear. 'Cause we know kids want to be back, and their families want them back, but safety, of course, is everybody's first concern. For us, it's still our 20th anniversary, COVID or not, and we're still going to educate teenagers about music. We're adapting to what the community needs are. It's a really strange time, but we're trying to figure out how we can help. These are the things I'm thinking about, the things that keep me up at night.”