The $4.2 million project will bring better access for cyclists, pedestrians.

A two-mile stretch of Jefferson is targeted for a $4.2 million makeover to help increase transportation options in the heart of Memphis.

The goal is to move "Downtown, the Medical District, and Midtown together," according to the project's page on the city of Memphis website. To get there, city leaders are asking for opinions through an "inclusive process of engagement" to transform the street between Front and Cleveland.

"Better Jefferson will provide safety and mobility improvements for all users along this important corridor, whether walking, bicycling, accessing public transit, or driving," reads the city's page on the project. "In addition to resurfacing and striping, proposed improvements include sidewalk and (Americans with Disabilities Act — ADA) upgrades, enhanced pedestrian crossings, traffic signal modernizations, bicycle facilities, traffic calming, and landscaping elements." 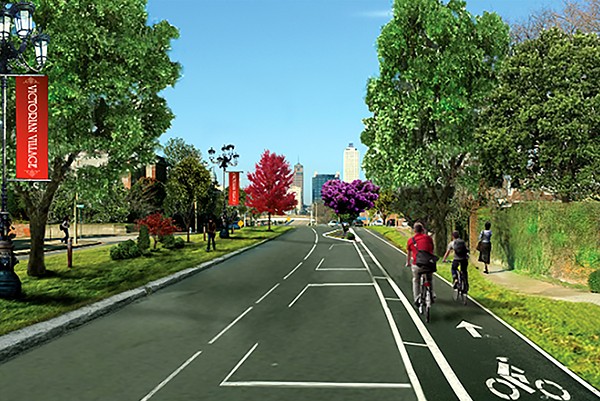 Nearly 60 people showed for a public input session recently that included a presentation on Better Jefferson from Kimley-Horn, the firm contracted to make changes along the two-mile stretch of road.

Better Jefferson would get rid of the "slip lane" by Regional One Health. The small strip of curving asphalt makes it easier for motorists to turn at the light but breaks up the sidewalk for pedestrians. In 2018, StreetsBlog USA said slip lanes are "very dangerous for pedestrians. Slip lanes don't belong in cities."

The project will also include "protected intersections" that merge bike lanes into traffic lanes, changing some Memphis Area Transportation Authority stops for efficiency, and those ADA upgrades. The plan would also introduce two-way bike lanes on the north side of Jefferson leading through the Regional One Health complex. The $4.2 million dollar upgrade has a start date of early 2022.

Commute Options Memphis (COM) has been banging the drum for projects just like Better Jefferson for some time now. Sylvia Crum, COM's project manager, says these projects are about more than new paint on streets.

"The crux of our mission comes from thinking about air quality, thinking about congestion, and how we can improve that by decreasing single occupancy trips," said Crum.

COM has been around since 2016 and is funded through the Congestion Mitigation and Air Quality grant. The group's work centers around improving traffic flow and general environmental health of the city. Specifically, they work to inform Memphians on ways they can better utilize the city's bike routes and commuting options.

"[There] can be a lot of considerations and barriers for some," Crum said. "When you are in the mindset of 'I've got to get out the door, I don't know how I am going to carry all my things if I didn't have my car,' the thought of using a different method to get to work can seem daunting."

Though Memphis has a way to go in terms of catching up to other cities in the U.S., Crum said the Better Jefferson Project is a step in the right direction.

"I hope that projects like the Better Jefferson are a way for all of us, all of the players and stakeholders, to work together and see what happens when we make our streets more liveable and safer for all of the users of the road," Crum said.

Memphians can find more information and leave comments on the project here.