Note: Flyer reviewer Addison Engelking gets the summers off from work as a schoolteacher. He tends to watch 80-100 films during his annual time off, so this season he's writing a movie diary encapsulating whatever it is that he watches in his spare time — old, new, foreign, domestic. Follow along weekly at the Sing All Kinds entertainment blog. — Greg Akers 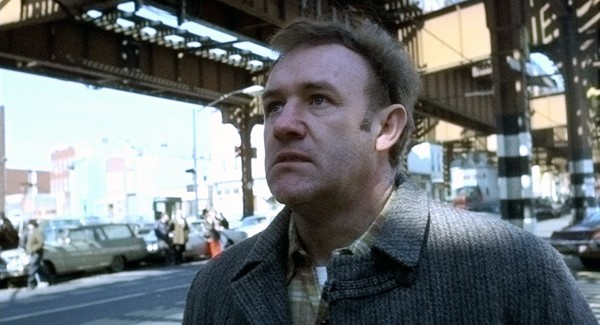 The French Connection (1971; dir. William Friedkin) — I rewatched this dirty, rabid little cop movie in 35mm at a revival theater recently, and its reckless, galloping forward motion shocked me. So did its conception of New York City as a bombed-out, blocks-long oil drum fire where there's probably a glassine envelope of heroin in your Christmas stocking, but you better watch out 'cuz Santa Claus is a racist undercover cop. Gene Hackman's brutish narco detective Popeye Doyle is a roughed-up charismatic whose mashed-in face rhymes with his mashed-in porkpie hat. The subway-train car chase is the most famous stretch of filmmaking here, and yes, it's great. But I've always been partial to Hackman's street-level horseplay with vacationing European drug kingpin Fernando Rey. There is a long flirtation between flatfoot and crook that's heavy on hand-rubbing, foot-stamping, phony window-shopping, and bad takeout food. And insomnia, lots and lots of insomnia — what young John says about Robert Mitchum's homicidal preacher in Night of the Hunter applies to Doyle sitting and smoldering in his unmarked squad car: "Don't he never sleep?" The finale inside a suppurating abandoned warehouse is a dead end as dark as Chinatown. Grade: A+

The French Connection II (1975; dir. John Frankenheimer) — Did you even know there was a sequel? If you didn't, you're kind of right to wish it didn't exist. It's best looked at as Gene Hackman's action-hero franchise audition, which he fails with integrity. Popeye Doyle is presented here as a no-nonsense, fashionable cop-movie axiom — there's a heroic hat fetish in this movie that predates Raiders of the Lost Ark by six years — but the contempt with which Hackman spits out catchphrases like "Pick your feet in Poughkeepsie" or "Frog One" is more enjoyable and weird than any attempted bronzing of his personal accoutrements. The European location is seedy, maybe too seedy; they must have trucked in garbage from Manhattan to litter the streets of Marseille. The most memorable stretch of the film is a lowdown drug-addiction passage consistent with Frankenheimer's interest in human transformations (see also: The Manchurian Candidate, Seconds). Doyle is captured, cuffed to a hotel bed, and forcibly injected with heroin until he's a vacant, scab-armed mess begging for another hit. While he's there, an old English lady visits him and steals his wristwatch. Where could anybody go from there? Grade: B

Rififi (1955; dir. Jules Dassin) — The blacklisted American director of Thieves' Highway (my favorite produce-themed film noir) finally overcame cold feet from European producers and interference from the U.S. government and got back into the movie game with this precise, pissed-off heist epic. Every character in it is perennially leaning down to whisper something serious and important to someone else, a motif that culminates, during the famous 33-minute break-in at the film's center, in a great overhead shot of pressed-together heads around a hole in the floor. That sequence, which relies on minimal lighting and incidental sounds (piano notes, suppressed coughs, the spray of wax), is one of the most influential stretches of filmmaking I can think of; dozens of caper films owe everything to Dassin's mixture of craftsmanship, suspense, and sweat. One of those countless great movies I finally got around to see, and three cheers for its canny use of off-screen violence, too. Grade: A+

Dylan Dog: Dead of Night (2010; dir. Kevin Munroe) — Some movies seem to know so much about how a city looks and feels that their visions coat your impressions of them whether you want them to or not. Others don't. Which is why it's such a dumb kick sometimes to experience movies whose vision of a city is so confidently and thoroughly absurd. Dylan Dog insists that vampire and werewolf clans run New Orleans and that its late-night bars and businesses are run by zombies who organize support groups to help the newly undead adjust to their new "lives." Brandon Routh, a more handsome, less in-on-it (or is he more in on it?) Bruce Campbell-type, stars in and provides the solemnly comic-book voice-overs for this muggy, entertaining Buffy episode. Too bad it ends like every other action movie ever. Grade: B+

One Hour With You (1932; dir. Ernst Lubitsch) — For a long time, the only Lubitsch I'd seen was The Shop Around the Corner, a delicate James Stewart/Margaret Sullavan romance from 1940. But the more I see of Lubitsch's work, and the more I try to figure out what everyone means by the "Lubitsch touch," the less interesting Shop seems. The series of musicals he directed in the late 1920s and early 1930s are so worthwhile because they luxuriate in a suave amorality best expressed through Maurice Chevalier's bashful grin whenever someone busts him for cheating on his lady. (If you've never seen young Chevalier, picture former Steelers coach and current CBS football analyst Bill Cowher with a Pepé Le Pew accent and a tendency to burst into song.) One Hour With You, a silly soufflé about two marrieds who play around behind each other's backs, overcomes the fixed-camera limitations of early sound cinema by providing tart, innuendo-filled dialogue — some of which is rhymed! — and keeping a discreet distance from its players. After some potentially final revelations that would topple a more serious-minded endeavor, the movie ends with a stylish shrug, as if the whole idea of fidelity is secondary to the satisfying of one's baser appetites. It's a fix-your-lipstick-before-the-firing-squad-shoots-you existential attitude that's pretty much nonexistent in movies these days. Too bad. Grade: A