Voters in Tennessee will have their say in choosing a presidential nominee. (And locally there’s a clerk’s race.)

Jackson Baker Tennessee’s two Republican U.S. Senators, Bob Corker (l) and Lamar Alexander, were in Memphis last weekend but shied away from picking a favorite in the GOP presidential race.

Come next Tuesday, March 1st, or "Super Tuesday," as it is known in the political lexicon, the next president of the United States might well be sped unstoppably on his — or her — way to victory. Or the current indecisive muddle could continue a mite longer.

It all depends on what happens in the 13 states where presidential primaries or presidential-preference caucuses are being held by one or both of the two major parties. Up until now, voting has been relatively piecemeal, beginning with the Iowa caucuses of February 1st and continuing with voting in New Hampshire on February 8th and in Nevada and South Carolina last week. But now a sizeable hunk of the nation — including Tennessee — gets to express its opinions all at once. 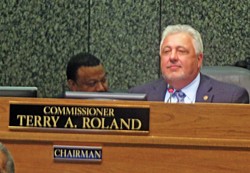 And that could establish trend lines that will hold the rest of the way until the party conventions this summer.

Although other, more populous states will play a major role in next Tuesday's voting — Massachusetts, Minnesota, and Texas, for example — what happens in Tennessee will be significant, too, both because the Volunteer State has appreciable voting blocs of various kinds, and because the state has traditionally played a bellwether role in national elections.

It may be, as Tennessee Senator Bob Corker pronounced on a visit to Memphis last weekend, that Tennessee's identity as a "red state" (i.e., Republican state) is "a given," but its Democratic and Republican voting populations could each shift the direction of the political consensus for the primary contests in both parties.

As for Memphis, one sign of the city's perceived importance was a much-ballyhooed speaking visit to Whitehaven High School two weeks ago by former President Bill Clinton on behalf of his wife, Democratic candidate Hillary Clinton. The visit — on February 11th — was two days after candidate Clinton had taken a shellacking from Bernie Sanders in the New Hampshire primary. (She has since rebounded with a victory in the weekend's Nevada caucuses.)

Another sign will be the visit here on Friday of Republican presidential hopeful John Kasich, the governor of Ohio who scored a strong second in New Hampshire's GOP primary and is looking for another bounce to keep his candidacy alive. Kasich will hold a town hall event at the Holiday Inn at the University of Memphis, beginning at 6 p.m.

Yet another Republican candidate made a fund-raising stop in Memphis last month. This was Florida Senator Marco Rubio, whom many observers now see as the Republican establishment's favored candidate against GOP front-runner Donald Trump, the Manhattan real-estate billionaire and reality-TV host whose bizarro tactics and populist appeal have upended advance expectations and made him the Republican candidate to beat.

According to Shelby County Commissioner Terry Roland, honorary chairman of the Trump campaign locally, candidate Trump will hold a rally at 6 p.m. on Saturday in Millington at the Regional Jetport. Roland says a large crowd is anticipated.

On Sunday, fading contender Ben Carson will attend services at Highpoint Church in Memphis, according to an announcement on the church's Facebook page.

Local backers of various candidates are busy setting the stage for next week's crucial vote. Within days of each other recently, large crowds showed up for the local headquarters openings of, respectively, Vermont Senator Bernie Sanders and former First Lady, Senator, and Secretary of State Clinton. Get-Out-the-Vote efforts of various kinds were proceeding in earnest on behalf of those two candidates and several of the Republican candidates as well.

• As it happened, two influential Republicans — Corker and Senatorial colleague Lamar Alexander — were appearing on the platform of the Shelby County Republican Party's annual Lincoln Day dinner at the Holiday Inn on Central Avenue Saturday night, in the immediate wake of Trump's primary victory in South Carolina.

In a joint encounter with reporters, and later, on the stage of the event, both Senators avoided making any direct comment on Trump's victory, which, among other things, chased out of the race former Florida governor Jeb Bush, a symbol of the national Republican establishment, and opened the way to a serious claim on the GOP's nomination by Trump himself, an outlier's outlier and the surprise front-runner among Republicans this year.

"My experience is that Tennesseans didn't elect me to tell them how to vote," Alexander said in the meeting with reporters. The state's senior senator stressed the importance of nominating an acceptable conservative so as to ensure that a GOP president, not a Democrat, has the choice of filling the Supreme Court vacancy left vacant by the death of Antonin Scalia.

To win the presidency, a Republican nominee has "got to get a few Democrats and independents" to vote for him, Alexander said.

And he, like Corker, made a point of pooh-poohing early contests — Iowa and New Hampshire, as well as South Carolina — as guides to the matter of who should be nominated. Alexander likened the nomination contest to an NFL season, in which the decision comes down to a final two teams after a long winnowing-out process.

Corker used a a similar metaphor in the meeting with reporters, comparing the Iowa caucuses and the New Hampshire primary — and, by implication, South Carolina — to "preseason games" but suggesting that the forthcoming multiple primaries, including Tennessee's, on Super Tuesday, amounted to a real "Showtime."

"The citizens of our state have the tremendous opportunity of seeing so much and taking it in, and now we have to decide," said Corker, who, unlike Alexander, hinted broadly that he would be making his preference public in a matter of days.

Acknowledging that "we'll be getting some calls tomorrow" from various candidates' camps — and perhaps from party dignitaries — Corker said he would "have to decide first who I'm going to support," either by Monday, the last day for early voting in the primary, or by Tuesday, March 1st, itself.

Repeating that formulation to attendees at the Lincoln Day banquet, Corker said the ideal Republican candidate whom he might support would have to demonstrate prowess in three specific ways: a determination to deal with fiscal issues, a plan for dealing with "a growing wealth gap" between rich and poor, and an ability "to lead the world." As it happened, Monday came and went without any statement of support for a candidate by the senator.

Rubio, who made an appearance in Nashville over the weekend, and who stands to inherit some of the establishment support from dropout candidate Jeb Bush, and Cruz, who has made a systematic effort to organize the state through developing a base among Christian evangelicals, are given some chance of doing well in Tennessee. But Republican lieutenant governor, state Senator Ron Ramsey of Blountville, while maintaining neutrality, is on record as saying that Trump will likely win both the Republican nomination and the presidency.

• Super Tuesday voters in Shelby County will see a ballot that asks them to vote by presidential candidate for one of 14 Republican candidates or for one of three Democratic candidates (the names of numerous Republican dropouts will appear on the ballot, as will that of dropout Democrat Martin O'Malley.) Voters will have to choose which primary to vote in, of course.

Beyond that, the ballot allows voters in the Republican primary to choose among several local citizens running as would-be Republican delegates, most committed to specific candidates, some not.

And there is one other matter to be decided. Democratic primary voters must choose between two candidates for General Sessions Court Clerk — incumbent Clerk Ed Stanton Jr., or his opponent, William Stovall. Republican Richard Morton is unopposed on the Republican primary ballot.