Immigration groups say many give up on asylum claims; Manuel Duran did not.

Manuel Duran, the Memphis journalist who was arrested last spring while covering an immigration protest and detained for 15 months, was released on bond last week.

Duran, held in various detention centers, was most recently in the Etowah County Detention Center in Gadsden, Alabama. After the Board of Immigration Appeals ordered that his case be reopened earlier this month, Duran was able to petition the court for a bond.

Reopening the case means Duran will now have the opportunity to go before a federal immigration judge to have his asylum claim heard. 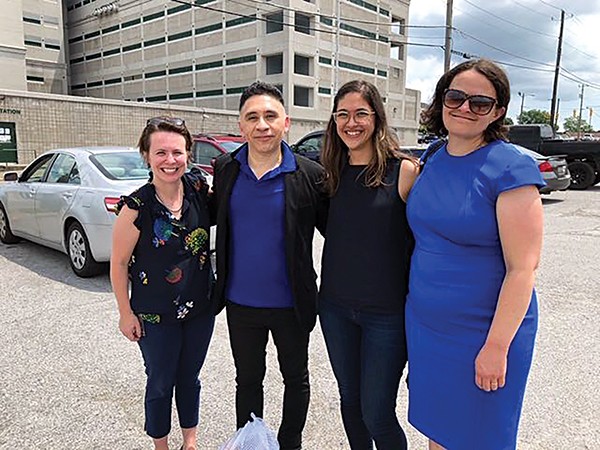 Gracie Willis, an attorney for the Southern Poverty Law Center (SPLC), one of the groups providing Duran with legal assistance, said though Duran's release is cause for celebration, "We are reminded that his struggle over the last 15 months is an indictment of an immigration system clearly designed to force immigrants seeking relief under the law to give up on their meritorious cases."

Sally Joyner, interim executive director of Mid-South Immigration Advocates (MIA), said Duran is a "survivor of the system," as over the past few years, it's become "extraordinarily difficult" to be released from detention centers.

"It's not impossible, and I think a great example is Manuel's case," Joyner said. "He was there for over a year and had the support of his family and the community. What he had going for him is solidarity. Sitting in jail for over a year while your immigration case is ongoing is simply not possible for some people who are so extremely traumatized and isolated."

Last week, MIA, officially launching its Asylum Initiative, went public with its effort to assist asylum seekers like Duran, but who've just recently arrived to the country and are being held in detention centers in the Southeast.

The initial focus of the initiative is the Tallahatchie Correctional Center in Tutwiler, Mississippi, which houses about 1,500 male asylum seekers. Joyner said the team has been traveling there three times a week since January to provide legal guidance by preparing detainees for the next step in the asylum process.

That step is called a credible fear interview. Joyner said that interview is "a crucial part" of the process and is used to determine if an asylum seeker's case should go before a judge.

The Tallahatchie detention center, located less than two hours from Memphis, opened about a year ago as the first asylum staging center in the country, Joyner said.

Asylum seekers there were transported from a U.S. Customs and Border Patrol facility at the border, put on a plane to Memphis, and then bused to Tallahatchie County where they will stay between three weeks and two months before being sent to another private facility in Louisiana.

"As these facilities open close to us in these isolated, rural locations, it's important that we make sure these asylum seekers have information about the process and their rights so they can have some kind of chance at making their claim," Joyner said.