Cruise around Downtown Memphis, stopping in at several breweries along the way.

Curious about bike tours? So were Ana Duran and Will Hanlon. The power couple wanted to combine their love for beer, business, bikes, and the city, so they came up with the idea of Curious Bike Tours.

"Bikes and beer go really well together," says Hanlon. "We had participated in Tour de Brewer, and we were impressed by the turnout. But it only happened once or twice a year at most. So we just wanted to do that more often." 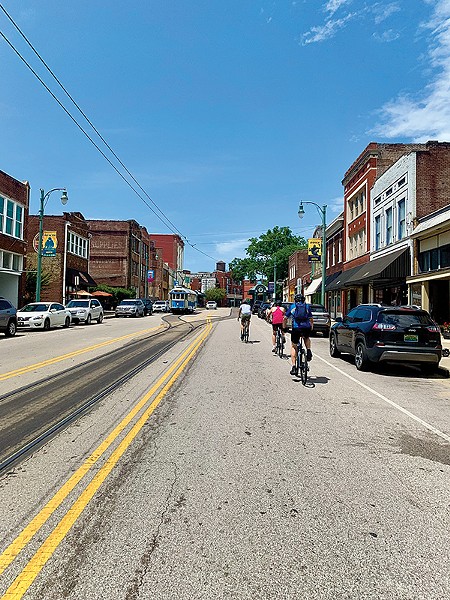 So, this spring, the pair struck up partnerships with various breweries in the city, so they could start hosting their own brewery bike tours. Every Sunday, Hanlon guides riders throughout the city, alternating between the Midtown and Downtown areas each week to explore landmarks and breweries key to those areas.

This weekend, the group will cruise around Downtown Memphis, stopping in at Crosstown Brewing Company, High Cotton Brewing Company, and Ghost River Brewery & Taproom to sample some beer. In between these stops, riders will learn about significant Memphis landmarks, like Crosstown Concourse, the Pyramid, and St. Jude Children's Research Hospital.

"I was actually a patient at St. Jude," Duran says. "That's what brought me to Memphis. So we always like to add personal touches to the places we go by. And this place saved my life."

Duran and Hanlon say that locals and visitors alike can reap the benefits of this tour.

"It's about the camaraderie — meeting people, sharing stories, and learning from others," says Duran. "And also, I'm sure we can feature a fact or two along the way."