June 17, 2020
21 comments
The protests and marches all over the country in the wake of George Floyd’s murder by police have once again roused the zombie corpse of the Confederacy — and have once again brought to the surface the ugly truth: Many Americans still venerate the racist, traitorous, losing side of a brief and bloody civil war that happened more than 150 years ago. 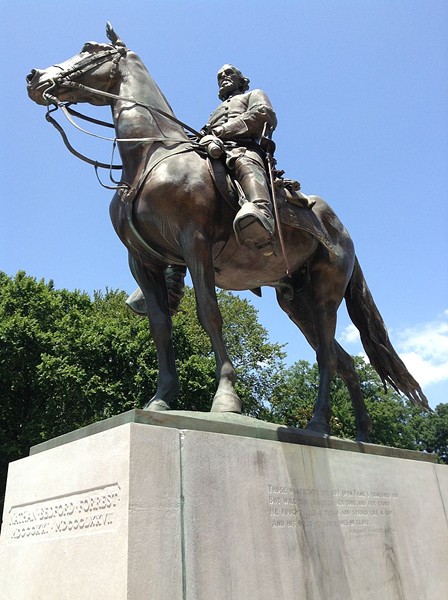 Thousands of Americans wave Confederate flags and wear Confederate T-shirts and ball caps and put Confederate bumper stickers on their cars and trucks. They are outraged when it is suggested that statues honoring the leaders of this rebellion against the United States should be taken down. They fiercely defend their heroes as paragons of “history” and “heritage,” not hate. The truth is, these Americans are insensitive and ignorant at best, racist at worst.

They’re right in one regard: There is history in the country’s Confederate monuments and statues, but it has little to do with honoring war heroes and Southern heritage. It’s instead a history of ugly politics, intimidation, and a not-so-subtle reinforcement of segregation. According to Mark Elliott, a history professor at the University of North Carolina, Greensboro, “The vast majority of [Confederate monuments and statues] were built between the 1890s and 1950s, which matches up exactly with the era of Jim Crow segregation.”

The Southern Poverty Law Center says there are around 1,500 Confederate memorials, statues, and other public memorabilia in 31 states in the U.S. Reminder: There were 11 states in the Confederacy. So why are there Confederate memorials in Idaho, Kansas, Arizona, and 17 other states that have no connection to the Confederacy, no reason to celebrate a Southern “heritage” that included human slavery? I wonder, don’t you?

And I wonder why a statue of Jefferson Davis would be erected in a downtown Memphis park in 1964. Could it be because the nascent civil rights movement was gathering steam across the country and a new statue of ol’ Jefferson Finis Davis, the president of the Confederacy (who wasn’t from Memphis), would serve to let the uppity locals know just who was still in charge? (Wink, wink. Remember when we owned y’all? Those were some good times, a way down yonder in the land of cotton!) Heritage!

The values these monuments stood for, he says, included a “glorification of the cause of the Civil War.” That’s why, to name two more examples, Georgia redesigned its state flag to include the Confederate battle flag in 1956, and why South Carolina placed the Confederate flag atop its capitol building in 1962.

It’s why even such a bastion of Southern culture as NASCAR decided to ban the Confederate flag at its races. The organization had become uncomfortable with the political baggage that comes with the stars and bars, a symbol that says that you’re okay with — in fact, you even celebrate — the “heritage” of owning human beings as slaves.

NASCAR isn’t exactly cutting-edge “woke,” but the organization clearly can see the writing on the wall. The future does not look bright for the Confederacy. At long last. More than 150 symbols of the Confederacy have been taken down in the past five years, including those in Memphis. And more will fall in coming months and years. Count on it.

If you still see de-glorifying the Confederacy as a problem, let me suggest that you reconsider the wisdom of building a lifestyle and value system around a losing war that consumed four years and three months of your great-great-great-great-grandparents’ lives more than 150 years ago. The Walking Dead has lasted 10 years, more than twice as long.

Let me further suggest that you stop and consider that that flag on your truck or your T-shirt is the symbol of a traitorous rebellion built around defending the horrific concept of owning human beings like livestock, putting human beings in chains and selling them at auction, separating human beings from their families, beating them, breeding them, putting them in deplorable housing, and lynching them at will.

It’s a shameful, revolting heritage. Those statues and busts and monuments you revere as history glorify the worst aspects of humankind, and are a recurring insult to millions of African Americans. It’s a history we need to study and learn from; it’s not a history we should honor in our public spaces.