It’s long past time to stop flying the Confederate flag.

Wave goodbye the Confederate battle flag in South Carolina. And don't use "heritage and history" as an excuse to keep it there. Just take it down.

Like every other human being who reads and watches the news and has a conscience, I've been grappling with the mass murder of nine people in a Bible study group at their church in Charleston, South Carolina, last week. Like millions of others, I have been trying to wrap what's left of my brain around how a 21-year-old could have so much hate in his heart that he could sit in church with the parishioners for an hour before opening fire on them (sparing the life of one woman so she could explain to people what happened). Like millions of others, I have come to the conclusion that we'll never quite understand it all. And like millions of others, I keep thinking about how we should progress from here and if there is any possible good that can come from this. 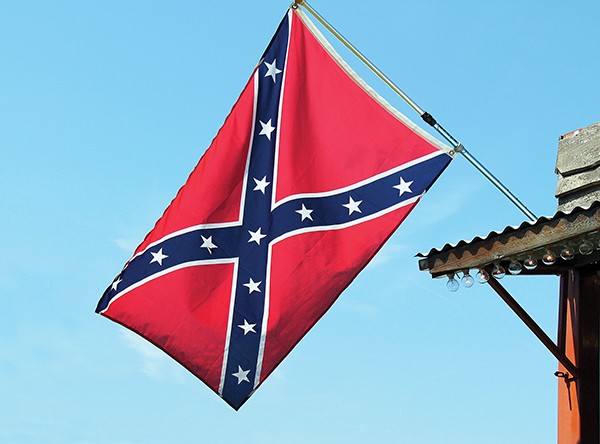 Maybe it's the fact that this heinous crime has furthered — catapulted, actually — the discussion about why South Carolina has no hate crime laws and whether it should stop flying a Confederate flag on its State House grounds. This controversy engendered an entire new language: Republican Beat Around the Bush Speak.

I just watched Republican presidential candidate Mike Huckabee try to state his opinion on the matter on one of the Sunday-morning political shows. It was like he was speaking a language that heretofore didn't exist. He simply made no sense.

I hate to politicize a tragedy like this, but it's already done. Whether to remove the flag is already a standard question for the presidential hopefuls, and so far the only one to demand its removal, as far as I know, is Mitt Romney, and good for him. The rest of them are hiding behind the tiresome and ancient notion of "states' rights" and dodging the question.

Same with hate crime bills. I heard one pundit say, "Hate is not a crime." Maybe it's time we changed the laws and put hate groups out of business for good, so they don't influence young people like Dylann Roof, the 21-year-old who confessed to the murders.

Am I missing something here? Does the rest of civilized society have to leave it to the people of one state to decide whether a symbol of hate and slavery should continue to be one of its calling cards?

I guess we could all boycott South Carolina, but that would be an affront to all of the good people who live there, and there are plenty of them. They are the norm. Not everyone in South Carolina is obsessed with the flag being about "heritage and history, not hate" — a repugnant ideology, given the fact that it was created as a symbol for white people to buy, sell, and trade African prisoners and brutalize them whenever the whim struck.

Perhaps the most ironic thing about the Confederate flag waving proudly as a reminder of dear old Dixie is that, while the state lowered the state flag and the American flag to half-mast in recognition of the nine African-American worshippers who were gunned down in their own church by a self-proclaimed racist, a bizarre South Carolina law prevented the lowering of the Confederate flag!

I dearly love the South. I was born and raised here. I talk to Europeans and visitors from around the world every day about the virtues of the South: the food, the culture, the laid-back lifestyle, the friendly people, the music, and the feeling they experience when here. And while I think South Carolina ought to remove that flag immediately, I think we in Memphis ought to take a look at ourselves again and remove that monument on Union Avenue to the founder of the Ku Klux Klan, Nathan Bedford Forrest. And I think our school system should incorporate some sort of anti-discrimination curriculum starting in pre-K and going all the way through 12th grade as a way to start stopping all of this racism mess, because right now it seems this country is regressing rather than progressing on the issue.

A great place for South Carolina's Confederate flag to rest would be in our own National Civil Rights Museum. It could be displayed next to the authentic and chilling Ku Klux Klan robe and hood that are already there. And photos of the remaining all-white country clubs in Memphis should also be in the display. Didn't think we still had those? Think again. They hide their bigotry behind the guise of "private membership," but they don't allow black or Jewish members. Maybe we should ask the families of the nine people murdered in Charleston last week how they feel about that.