Jackson Baker Dean at Baptist Ministerial Association event;; question: what is First Samuel 7:12 B? "B?"

Among other outcomes desired by Republican gubernatorial candidate Bill Lee was the voucher legislation long proposed by Germantown state Senator Brian Kelsey but now dropped in light of opposition from suburban school advocates.

But Lee, whom a recent Whit Ayers poll shows to be running a strong third in the ongoing GOP primary to U.S. Representative Diane Black and former state Economic Development Commissioner Randy Boyd, is still a strong believer in partnerships between government and the faith-based community. It's the premise of his current statewide tour, the third so far in the campaign of the Williamson County businessman and farmer. Monday saw Lee and his wife Maria at St. Jude Children's Research Hospital and the Life Choices pregnancy care center in Memphis.

Lee was preceded to town by Democratic gubernatorial candidate Karl Dean, the former Nashville mayor, who was hosted at a Friday luncheon by another faith-based group, the Memphis Baptist Ministerial Association, at Mt. Moriah Baptist Church on Wellington. Noting that in recent times Republicans and Democrats have taken turns with two-term incumbencies as governor, Dean said "It's our turn" to occupy the governor's chair. And he also noted in a conversation with reporters after his public remarks that Phil Bredesen and Bill Haslam, the two governors preceding whoever is elected this year, had both, like himself, served previously as mayors. 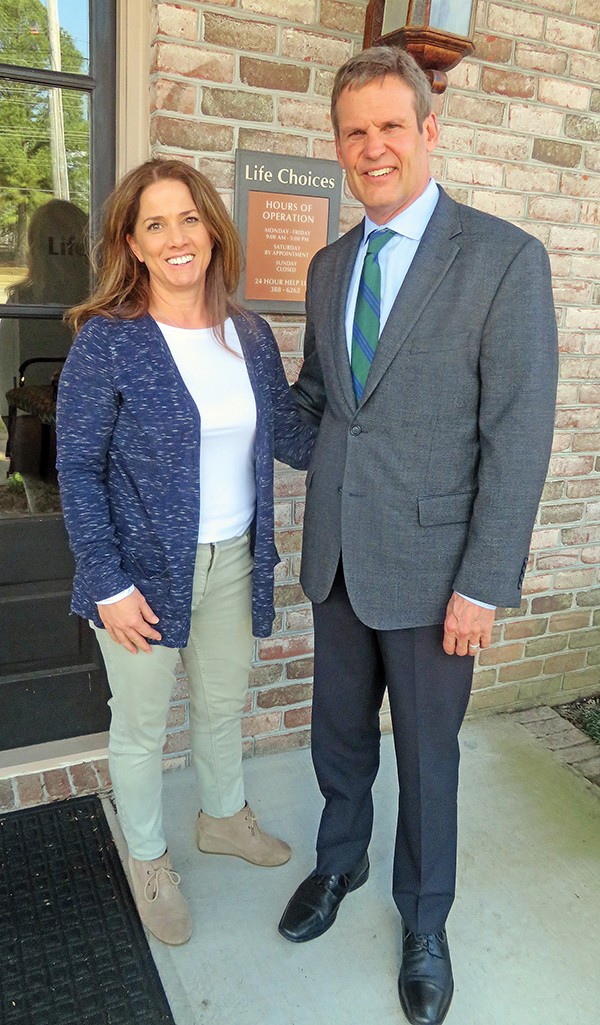 Dean deemed his service as mayor, a nonpartisan position, to be good preparation for the task of presiding over a state like Tennessee, with a population that stretches ideologically from left to right but has, for most of its history, kept a political balance.

All's Well That Ends Well: The Shelby County Commission, with a light and theoretically non-controversial agenda to deal with on Monday, saw a bit of drama.

One audience member, District 13 Commission candidate Charlie Belenky, took issue with the body's setting a relatively quick April 2nd date to appoint a successor to departing General Sessions Judge Larry Potter. Belenky's point was that any appointee would have a running start and an advantage over potential election rivals. The commission's retort was that the traffic in Potter's court was so brisk as to permit no delay.

Another audience member quarreled in vain with the commission's long-established practice of awarding grants to local nonprofit charitable organizations, the case in point being one to Memphis Inner City Rugby.

And a final audience speaker, the ubiquitous activist Dr. Yahweh, delivered a long philippic against what he deemed the poisonous evil of fluoridaton in local water. Against all expectations, he ended up earning an ovation as a hero, not for his anti-fluoride message, but for his proud history, 50 years ago, when, as Lance "Sweet Willie Wine" Watson, a member of the Invaders, he was associated with the cause of the sanitation workers striking that year and with the memory of the slain martyr Dr. Martin Luther King Jr.

A grateful Ford delivered himself of some lengthy remarks in which he extolled the current council and remembered being the seventh or decisive vote in several controversial council measures, notably including a controversial one that altered the benefits package of Memphis poilicemen in the interests of the city's solvency.

Wharton, whose election loss in 2015 may have owed something to that moment, responded with a reminiscence of his own, backing up Ford's view. And, as an incidental part of the general kumbaya, the former mayor co-existed jovially with Schledwitz, a 2015 supporter whose inadvertently leaked election-day prophecy of a Wharton loss to Jim Strickland had been the source of tension at the time.

For further political news and pictures, see also the slideshow An Eye on Politics at memphisflyer.com.