A little neighborly dialogue might reveal solutions for both the friends and foes of firearms.

With the release of Dianne Feinstein's proposed assault weapons ban, the heated deliberation over gun control continues. One of the primary obstacles in the firearms debate is not deciding which side is right but how we engage in the discussion. You cannot have a reasonable conversation when each side lacks even a basic level of respect for the other. 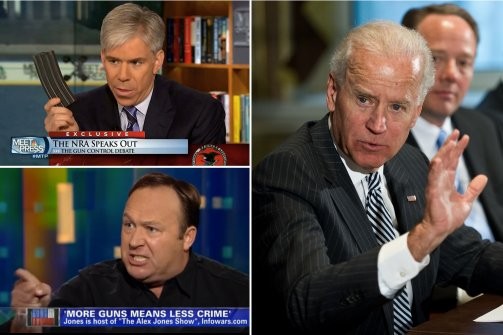 The gun-o-phobes screech at the sight of any weapon, passing judgment on those who own and use them. While demanding tolerance in controversial moral matters, many of these same individuals show no empathy toward gun owners. The inconstancy in their actions adversely affects the credibility of their critiques.

The pro-gun crowd's credibility is similarly compromised by the conspiracy theorists in their midst. Any possible regulation becomes an all-out assault on the Constitution, which leads to a snowball effect where the government confiscates everyone's guns. Anyone even proposing the idea of new gun regulation is labeled a socialist or communist.

We should not allow the conspiracy theorists and the gun-o-phobes to dictate the terms of our national dialogue. Luckily, most Americans do not occupy these extreme positions. So what might a respectful and rational discussion about the regulation of firearms look like? If we can imagine it, then maybe we can make it a reality.

First and foremost, we need to be aware of other people's concerns, their points of view, and understand that the passions flowing through their beliefs are real. Those who wish to regulate guns are genuinely worried about the safety and security of their communities.

The desire to remove what they believe to be dangerous weapons from their streets is not a novel idea. On April 19, 1881, the city of Tombstone, Arizona, passed Ordinance No. 9, "To Provide against Carrying of Deadly Weapons." On August 14, 1882, Dodge City, Kansas, enacted Ordinance No. 67, prohibiting anyone from carrying "concealed or otherwise about his or her person, any pistol, Bowie knife, slung shot, or other dangerous or deadly weapons, except County, City, or United States Officers."

In reaction to the growing violence in their cities, residents resorted to regulating the tools used by those who endangered their communities.

On the other side, law-abiding gun owners feel like they are being treated like criminals. They have the individual right to keep and bear arms if the weapons they own were legally purchased.

Beyond the Second Amendment, personal property is protected by the Fifth and Fourteenth Amendments. Gun-control advocates have to understand: If bans are passed, then we are authorizing the government to confiscate people's possessions and limiting the choices they can make. It can be difficult to empathize when you will not be personally affected by a law.

Where might a discussion start, when both sides of an issue have legitimate concerns that appear to oppose and contradict each other? It begins at home. When issues are expanded to the national level, they lose their nuance and become black and white. Solutions that are appropriate for downtown Memphis might not apply to rural communities where the nearest neighbor is a mile away.

Tombstone and Dodge City took on the subject of violence at the local level. Both towns provided check-in spots, and people's possessions were returned when they left town. They allowed gun and knife owners to keep ownership of their property but regulated their use.

Their answer appears to fall in line with Justice Antonin Scalia's ruling in District of Columbia v. Heller, which affirmed an individual's right to keep and bear arms: "Like most rights, the right secured by the Second Amendment is not unlimited. ... We think that limitation is fairly supported by the historical tradition of prohibiting the carrying of 'dangerous and unusual weapons.'"

Some, however, claim that all guns are dangerous. But to follow that line of argument is to deny the existence of degrees. I have fired an AR-15 that was legally modified with a slide stock. While I enjoy shooting, I personally believe a "semi-automatic" that can empty a 30-round clip in less than three seconds meets Scalia's "dangerous and unusual" test.

Maybe locally controlled centers or certified gun ranges could be created, where those who own weapons deemed "dangerous and unusual" by their communities could check their guns in and out. The Wild West solution seems to satisfy the concerns of both community safety and individual rights.

The challenge is to change how we discuss the regulation of firearms. Instead of a national discussion, we should have community-based conversations. The debate over gun control is not going away, and neither are our neighbors.

Brandon Goldsmith is a Ph.D. candidate in political rhetoric at the University of Memphis.