Forgive me because I'm going to name drop here. Two years ago, in a phone interview about her excellent novel An American Marriage, Tayari Jones told me that we are in need of normal folks' stories, now more than ever. I couldn't help remembering her words during a recent interview with author and former taxi driver and bartender Lee Durkee, whose new novel The Last Taxi Driver (Tin House Books) is often preoccupied with similar concerns.

"I know writers who have gone from undergraduate to graduate programs to being teachers to being tenured," Durkee says. "And I'm wondering, where's the grist? If 95 percent of the writers in America work in English departments, I don't think that's healthy for our literature." Durkee, whose own career trajectory is the polar opposite of the Associated Writers Program and MFA program route, adds, "The people being neglected are the people with regular jobs." 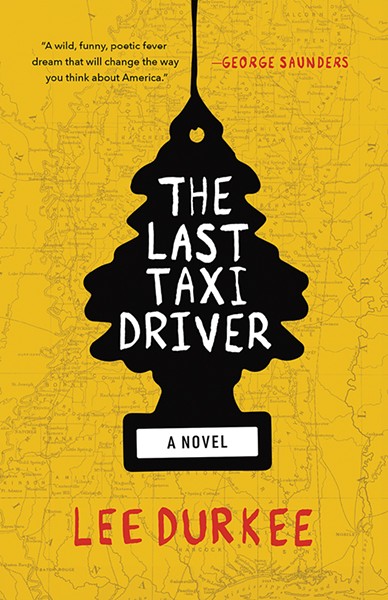 Durkee's debut novel Rides of the Midway was published in 2001. In early life and in the years between Midway and The Last Taxi Driver, Durkee accumulated a veritable trunk-full of grist. The Mississippi native lived in Arkansas, New York, and Vermont before returning to Mississippi, where he drove a taxi while writing The Last Taxi Driver.

"It was the most sobering, fascinating job I've ever had. Bartending isn't exactly a sheltered environment, but when you're driving a cab you're dealing with levels of poverty that you don't usually see," Durkee says. "The taxi company I worked for had a contract with a local hospital, so when somebody was being kicked out of the hospital for whatever reason — usually economic — we would have to take 'em back to wherever they lived in north Mississippi." Durkee remembers dropping off an 80-year-old man, recently ejected from the hospital, at an unairconditioned teardrop trailer parked in the middle of a field. "Your job is to help the needy and then abandon them as quickly as possible so you can pick somebody else up," Durkee says bitterly. "That's just the name of the game."

That grim game informs Durkee's new novel. There is depression, dirt, grit, and grist aplenty, but the novel shyly displays a bruised beauty as well. Durkee writes, "We are the poor man's ambulance, and we are also, sad to say, the poor man's priest, our cab the confessional in which people litmus-test their wildest fears and prejudices."

So, for the reader and for Durkee himself, it's likely for the best that he's now writing full-time — and no longer driving a cab. "[Writing] was never my primary source of income until about four months ago, when I got to quit driving. And I get up and write now for the first time in my life. That's new to me."

The Last Taxi Driver does have humor and heart, both things that serve hardworking folks well. It strives for brighter horizons while committing to acknowledging the darkness inherent in most human ventures. Lou, the novel's protagonist, muses, "You swear off your prejudices, but they keep accumulating. You vow away traffic tantrums, yet the car camera keeps recording them. And most every day you learn there is a limit to your kindness."

The novel is wickedly funny, too, as is Durkee in conversation. For all the hospital runs, there's also the cab dispatcher's drug-addled son, so many Bigfoot-shaped air fresheners, and even a UFO encounter, something Durkee says he's experienced more than once. "My friend was driving, and I told him to open the sunroof so I could stand up in the seat with my torso protruding above the car, just staring at this UFO that I could have hit with a slingshot. It just seems like a part of my life, for whatever reason, and I go with it," Durkee says. "I get the cynicism, but it's a fascinating world."