Lansky's, the legendary clothier for Elvis and “musicians, celebrities, dandies, pimps, and gamblers” returns to its original home.

As proprietor Hal Lansky welcomes you into his family's new store on Beale, he stands in the building that his father and uncles turned into one of the most influential clothiers of the 20th century. Perhaps most famous for dressing the legendarily natty Elvis Presley, Lansky's has deep roots in Memphis, and the new store features a museum-quality photo exhibit that is a testament to that history.

"This whole story doesn't exist without Elvis," said archivist David Simmons, who worked with Lansky's on the new store and museum on Beale. "But the story is a lot bigger than that, a lot bigger. These are men who changed the way America dressed."

During Elvis' first appearance on The Ed Sullivan Show, he was wearing an outfit purchased from Lansky's on his new credit account. That was September 1956. By then, founder Bernard Lansky (Hal's father) and his brothers had been in the store for a decade, meeting the peculiar needs of Beale Street.

"Musicians, celebrities, dandies, pimps, and gamblers," is how Simmons describes the clientele in photos. "Look at that outrageous merchandise. [The Lanskys] were never shy about pushing that envelope."

Beale Street had quite an envelope. Once a street of white-owned businesses, many of the properties were bought by black businessmen like Robert Church Sr. in the late 1880s. It was named "the Main Street of Negro America" by black businessman George W. Lee. A 1947 obituary for gambler Mac Harris described his dress: "He was known to have strutted down Beale Street in a cutaway coat, striped trousers, and a wide felt hat, twisting his mustachios, his Van Dyke beard trimly cut, his cane flashing in the lights."

Hal grew up on Beale Street and has watched his family outfit American culture, black and white, for more than half a century. After a brief interlude operating in other locations, Lansky has doubled down on his roots and returned to the clothier's original building on Beale. It looks like a good bet.

"The only way [my father] got part of the building was that his father loaned him $125," Lansky says. "The only space they could find was at 126 Beale. The only reason they got the space was that a man was murdered in the store. When they got it, they had all kinds of ladies' stuff. My dad was a pretty colorful guy. He said, 'This ain't me.' He took all the ladies' stuff and threw it out on the street. Then within hours, the stuff disappeared. So they needed something to sell. It was 1946, and the war was over. They started selling Army surplus. Pants, shirts, cots, fatigues for $1.99. After a few years, the stuff started running out. Of course, they were merchants. They needed something different."

Hal has a visceral enthusiasm for the space, which is shared by new tenants the Hard Rock Café and the Memphis Music Hall of Fame.

"This building has a colorful past," Lansky says. "In the late 1890s, it was the courthouse. [Later] the second floor was a house of prostitution. They were renting the rooms out by the hour. My dad said, 'This is some valuable space.' So my dad started renting the rooms out for the day, the week, the month, until he controlled the whole top of the building. Then he started moving his formal wear and tuxedos up there. Now, we're excited that the story is back on the map." 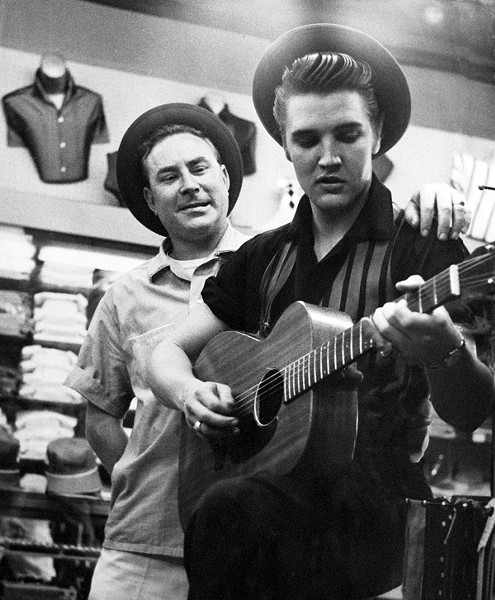 Growing up on Beale was a front row seat to American history, Lansky says. He's still amazed by how hard his family worked and by the people they grew to know and love.

"When I was a young man, there were really no store hours," Lansky says. "When there was business, my parents were open."

Simmons adds that Lansky's was probably the first white-owned store with black salesmen in Memphis.

"Beale Street was an African-American street," Lansky says. "It was a black man's street. Whites really did not come on this street. Surprisingly, Elvis did."

Presley was hip to Lansky through his fascination with Dewey Phillips, who often did remote radio broadcasts from the store. Bernard's brother, Guy, was frequently quoted in Peter Guralnick's Presley biography Last Train to Memphis: The Rise of Elvis Presley. Elvis was a fan of Bernard Lansky before he became the King of rock-and-roll.

"We hang our hat on Elvis," Lansky says. "He put us on the map. But we've had so many people through our doors before Elvis. Being the 'Clothier to the King' is a great thing. People in Memphis say, 'I don't want to shop at Lansky's. I don't want to look like Elvis.' But we've changed every decade. If we hadn't changed our looks and our style, we'd have been out of business 30 years ago. I tell people, if we sold white button-down shirts, we'd have gone out of business. If Elvis wore a white button down shirt, he might still be driving a truck. With his talents and our styling, it was a great combination."

That philosophy outfitted Presley when he appeared on The Ed Sullivan Show on September 9, 1956. A telegram from Lansky to Presley hangs among the new shop's museum-like space. Lansky wishes Elvis well and asks for a plug on the broadcast. Lansky didn't get his plug, but it illustrates an eye for business that helped him succeed beyond the realm of the King. But Lansky and Elvis are inseparable. Also on display is a photo of Bernard and Hal in a three-wheeler Messerschmitt micro car that Lansky bought from Elvis. The title has two Presley signatures, which Lansky knew were valuable.

"A lot of people begrudge [Elvis' manager] Tom Parker," Lansky says. "[He] would always write two checks. Let's say the bill was $400. One of the checks would be $300 and one would be $100. He'd get Elvis to sign one of those checks because the merchant would keep them. They didn't cash that check. It was like getting a 25-percent discount."

The stories are endless.

"Sam Samudio. Sam the Sham. He and my dad were tight," Lansky says. "During those days [Samudio] was a drinker. He's found religion now. But he drove his motorcycle into this building and left the motorcycle in this building for probably two years before he finally realized where it was. My dad stored it for him for two years."

Lansky was an integral part of Beale Street, a fact that kept the store in business during the 1960s, when African-American Memphians captured the torch of popular music.

In 1967, Stax Records conquered Europe with a tour that is still legendary almost 50 years later. Otis Redding's performances in Paris are some of the greatest filmed documents in popular music history. It was the label's global moment. Redding conquered the world. The Stax group's suits came from Lansky's.

Wayne Jackson recalls the tour in his biography, In My Wildest Dreams. Jackson was a member of Stax's first-born band, the Mar-Keys. Going to be outfitted at Lansky's was a big deal. Jackson writes:

"It's where Elvis bought his wild, honky-tonk stuff, and we all knew it. So we looked into the triple mirrors. Holy God! Zoot suit blue! Bernard was ecstatic! 'I got this number in cat-eyed green, too! All wool to the bone! Hey! You guys gonna take over Europe, man, in MY clothes! Mohair from Lansky's! I don't think even Elvis got this suit! I mean it! Would I lie to ya?'

Then it was Andrew and Joe's turn, and we laughed as Bernard did what made his life a wondrous thing.

'I'm not kiddin'! You guys think I'm KIDDIN' but I am not KIDDIN'! You guys are gonna make 'em crazy for you in these suits, you watch what I tell ya! 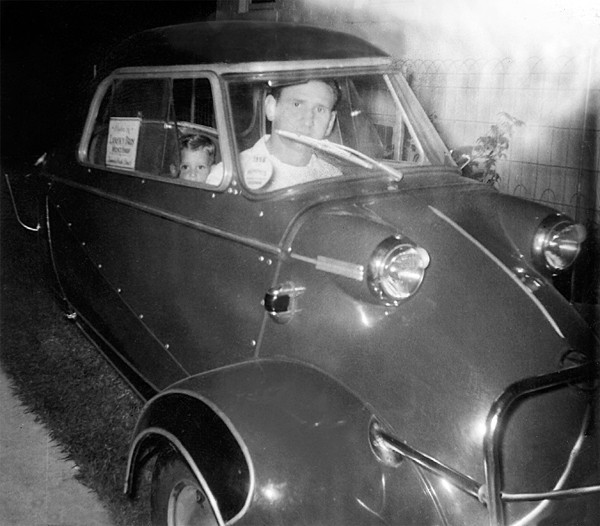 Another client, Rufus Thomas, based his "Ain't I Clean?" bit — showing off his suit lining with his trademark grin — on his Lansky duds and was a major proponent of the Miami Stomper, thigh-high, red, python boots. Lansky's was the leading store in the country for selling the Stomper.

Lansky's will share the building with two musically themed tenants, the Memphis Music Hall of Fame and the Hard Rock Café, an international company with Memphis roots.

"I was working in the store in the late 1960s or early 1970s, and I kept seeing this guy with Rolls Royces," Lansky says. "I could see him turning right [in front of the store]. This was going on for a matter of months. Finally I asked, who is this guy driving the Rolls Royces? His name was Isaac Tigrett."

Tigrett, of course, is the son of financier John Tigrett and the founder of the Hard Rock Café and House of Blues.

"He would go over [to London] with his dad," Lansky says. "Isaac would be flipping these Rolls Royces, bringing them back and selling them. He was a business-minded guy. I think that's cool. And in 1972, they opened the first Hard Rock Cafe in London."

The first Hard Rock was housed in the former Rolls Royce dealership.

As we walk through the new Hard Rock, Lansky is proud of what his family has accomplished. He beams with pride about a life and a story that he didn't always appreciate.

"All my friends' dads were professionals: They were doctors or lawyers. [My dad] sold clothes to black people. Back then it wasn't too cool. My dad made a good living. But it's cool that 50 years later, after my dad is gone, people around the world know him. His obit was in the New York Times. People from around the world know the Lanskys. Now it's cool. We've met all these people and lived this story. The tables turned. I know Robert Plant. Back then, young people were into the British Invasion. But they never witnessed what I saw on the street."

The Hard Rock Cafe celebrated its new location on Beale Street. The Bar-Kays are the greatest.