Mabon "Teenie" Hodges wrote a song that one could mistake for a 19th century gospel standard. "Take Me to the River," which he penned with Al Green in 1973, has a startling simplicity to it. But then so did Teenie Hodges' guitar playing. He was a master refiner of ideas and phrases, whittling them down to a profound and economical beauty.

Hodges passed away Sunday night in Dallas from complications of emphysema. He had gone to Austin in March to promote the film Take Me to the River, which is based in part on the world that Hodges lived in with his brothers Leroy Jr., a bassist, and Charles, a keyboardist. In Austin, they celebrated a lifetime of soul music and success. Teenie never made it back to Memphis, but his soul and his spirit leave an indelible mark on our city. The Mitchells and the Hodges are founding fathers of Memphis' musical identity.

"My dad and mom had seven kids in four years," Teenie's brother Charles Hodges said last March before heading to Austin. "So there were three sets of twins in a row. Leroy (bass) is my oldest brother. Teenie is between Leroy and me. Teenie's twin is a girl, and I have a boy twin. They had eleven kids in all."

It was a musical home: Their father, Leroy Sr., had been a musician and kept a decidedly musical house. One might think that a home with so many brothers might collapse into a competitive mess. But that was not the case.

"We didn't compete. We worked together," Hodges said. "We didn't go to school for it. It was a gift from God. My dad just helped us develop our talent." 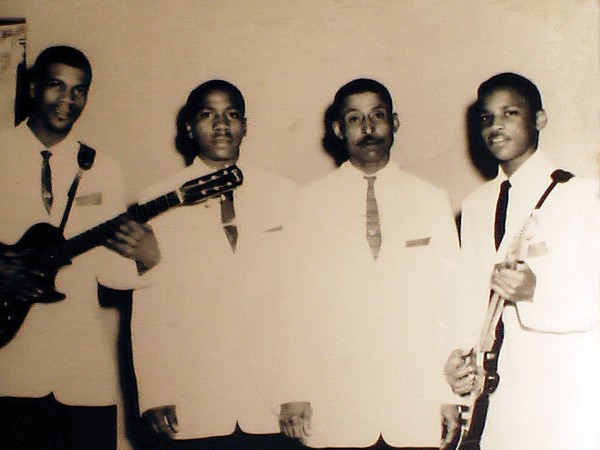 Named "Teenie" due to his diminutive stature, Hodges began playing in his father's band at age 12 and was soon noticed by bandleader Willie Mitchell, who played a profound role in Teenie's life. But Teenie made major contributions to the Mitchell empire too. "Howard Grimes," Charles said. "Willie had another drummer after Al Jackson went with Booker T. and the MGs. Jeff Greer. ... Willie wanted to change the drummer. So Teenie told him about Howard Grimes. We heard Howard, and he just blended in."

The records that came from this period are classics and key elements to our musical culture as a city and as a country. Al Green, Ann Peebles, O.V. Wright, and the Hi-Rhythm albums don't need further explanation. If you don't know them intimately, you have a problem. The music Teenie made with Mitchell also became the gold standard for young players, and his openness as a person and a mentor provided a supreme example to younger players.

"Memphis lost a cornerstone of its musical identity," Luther Dickinson of the North Mississippi Allstars wrote of Hodges' death. "Similar to Al Jackson, without Teenie, Memphis soul will never be the same. Teenie was so cool. He elevated the whole city singlehandedly. He was one of the real Memphis guitar heroes, like Scotty Moore, Roland Janes, Steve Cropper, and Reggie Young, playing melodies and rhythms on records that millions of people love worldwide. His guitar style is ingrained in the human collective consciousness."

Joe Restivo, through his work with engineer Scott Bomar and his band the Bo-Keys, was occasionally called upon to fill in for the ailing guitarist.

"I didn't quite understand his genius until I got to play within the context of Hi-Rhythm. There's a way that whole thing fits together. That's when the light bulb goes on. ... His parts fit perfectly in relationship to Howard Grimes, to Charles, Leroy, [and] Hubie [keyboardist Archie Turner]. If you're playing that role — and I had the opportunity to do that a couple of times — you find yourself doing Teenie. You can't do anything else. It's his style, his concept, where he laid it in the pocket."