The process of giving elective birth to Tennessee's 50th governor got underway this week, with the first filings of campaign financial disclosures. At this embryonic stage of the race, Randy Boyd, Knoxville multi-millionaire businessman and former commissioner of the state Department of Economic and Community Development (ECD), shapes up as the gubernatorial frontrunner among Republicans — which means frontrunner generally, in our red state.

Governor Bill Haslam is a Boyd buddy and appointed him to the ECD, providing a statewide stage to perform to the general applause from the state's politically astute business leaders.

Boyd has hired veteran political operative Chip Saltsman to run the campaign, has lined up public support from a bunch of mayors and a few legislators (mostly East Tennesseans), is working hard and can self-finance — putting in $2 million in direct funding rather than the traditional loan — while collecting another $2.3 million from other donors.

The lame duck governor, of course, isn't publicly endorsing anyone in the primary, but many of his best political friends see the election of Boyd, who's already facing attacks from arch conservatives, as the next best thing to a third term for the mild-mannered and moderate incumbent.

At the other end of the spectrum, politically and financially, is Republican state Senator Mae Beavers of Mount Juliet, who has the strongest right-wing credentials in the field and a small corps of devout followers. Theoretically, if she can maintain that status, Beavers might have at least a long shot at winning the nomination. But she's not known statewide and reported just $56,721 raised in her first disclosure, including $20,000 transferred from her state Senate fund.

U.S. Representative Diane Black of Gallatin, the House Budget Committee chair, has told a lot of folks she wants to run but is hesitant while serving as moderator in federal funding fights among Washington GOP factions. The delay in a campaign kickoff has already hurt her prospects, and a budget blowup could hurt more — or help, if everything falls into place. She and her husband, David, are multi-millionaires and reportedly ready to spend whatever it takes in playing hard-ball catchup. Black is a formidable campaigner who has a past that includes surviving bitter political clashes and overcoming personal problems. Her overall prospects in a governor's race are something of a mystery at this point. 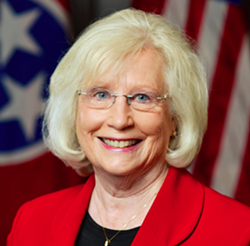 House Speaker Beth Harwell has already earned a note in state political history by becoming the first woman elected to lead a chamber of the General Assembly. She touted two decades of political experience in announcing her candidacy, having toyed with the idea since at least 2009. That experience, though, has brought negatives as well as positives as Harwell — usually rather reluctantly while striving for some middle-ground stance — chose sides in GOP super-majority squabbling.

In January, she came within 10 votes of losing reelection as speaker, and another roll of the dice at that table would be risky. To the gubernatorial table, she brings about $1 million in seed money available in existing accounts, some self-funding capability, and a long list of potential donors — enough for a respectable run to wind up a political career one way or the other.

Bill Lee, a multi-millionaire Franklin businessman and cattle farmer, is generally regarded as an extreme underdog in making his first run for political office, despite almost matching Boyd in money matters with about $1.4 million collected from friends and a matching amount loaned to his campaign. Lacking an established political base, Lee has been making a pitch to evangelical Christians and presents himself as to the right of Boyd, though not nearly as much in that direction as Beavers — so far. His candidacy threatens to drain some votes from others, but probably not enough to do more than gain experience for another run somewhere down the road.

President Trump's move to put Senate Majority Leader Mark Norris on the U.S. District Court bench, rather than leave him to follow through with talk of running for governor, means no major candidate from West Tennessee to enjoy that geographic loyalty Boyd seems to be developing in the eastern part of the state. So Boyd enters the western arena on equally unknown footing with the others, all from Middle Tennessee, and maybe benefits a bit.

Arguably, Harwell does, too, since the two legislators run in the same legislative political circles.

Tom Humphrey, formerly with the Knoxville News Sentinel, is a contributing editor of the Tennessee Journal. See Politics, p. 8, for his musings on Democratic gubernatorial candidates.