Stand up if you're not surprised that President Trump caved in on his resolve to "fight the NRA" if necessary to get effective public-safety legislation on guns. No, don't, on second thought. So massive and sudden a change in the disposition of planetary weight could cause tectonic shifts

and endanger the earth's equilibrium in its orbit about the sun.

Nobody should be surprised, any more than they were surprised when Trump backed off from a promise to sign bipartisan legislation on DACA a month earlier. Nor when he abandoned a dozen other promises of constructive action. 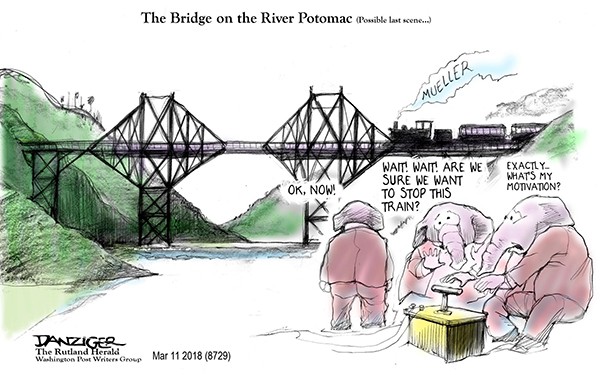 This is a president who is on a permanent campaign swing, but in the 14 months that he has actually held office, has seemingly learned nothing about governing itself. Even those few circumstances his devotees can tout as "triumphs" — the appointment of conservative Supreme Court Justice Neil Gorsuch, the passage of a monumental tax cut favoring the wealthy — are merely services demanded by and performed for the sake of the special interests who see in Trump's tenure an opportunity to aggrandize themselves.

But the cave-in to the National Rifle Association, whose influence in the gun bill just proposed by Trump is all too obvious, is especially disheartening. The legislative package announced by Trump — the same President Trump who had the nerve to chide members of Congress for being "afraid of" the NRA — carefully avoids any particulars that would go against the wishes of the gun lobby.

One of the bill's main provisions would offer support for teachers willing to pack "defensive" weaponry at school facilities. That means more guns for sale, and that presumably suits the NRA and the firearms industry just fine. Another provision would ostensibly firm up background checks but continue to leave the ubiquitous gun shows immune to such controls.

Ideas expressed by Trump during his breast-beating "fight-the-NRA" moment e.g., raising the minimum age for firearms purchases to 21 or doing anything to curtail the sale of assault weapons — are unsurprisingly missing. Given that some of these stricter measures did end up in a bill passed at the behest of the Republican Governor and GOP-dominated legislature of Florida, it is obvious that any true relief will have to come at the state level.

Is there any hope then for Tennessee, where bills friendly to the gun lobby normally have an easier time than resolutions in praise of springtime? Surprisingly, there might be. A task force on approaches to firearms control has just been appointed by Governor Bill Haslam, and, in the apparent deference to that, two gun bills — one to arm teachers, another to reduce (!) the financial penalties for unlicensed gun possession — have been put on hold.

In the context of the assembly's gun-happy recent history, doing nothing amounts to a constructive act. We don't normally put much stock in the appointment of commissions or task forces as substitutes for action, but this one puts us in mind of the famous health-care axiom: "First, do no harm." That may be the best we can hope for.