Term Limits? How About Time Limits!

Candidate forums serve useful purposes, so long as they are kept within bounds.

It was late last month, with the contested races on the May 6th countywide primary ballot heating up, and the Germantown Democratic Club was listening to an election pitch from Shelby County Commissioner Steve Mulroy, one of three Democrats vying in their party's primary for the right to take on incumbent Republican County Mayor Mark Luttrell in August.

Mulroy had his say, which included a succinct reprise of his recently failed attempt to get the commission on record as opposing a renewal of county government's contract on Title X women's health services with Christ Community Health Services (CCHS).

The commissioner vowed to press on with the issue, which to many of his liberal admirers is his penance for having voted for CCHS three years ago over perennial grant-holder Planned Parenthood, which had incurred the animus of social conservatives in general — and the Republican establishment in particular. The reason for that was the agency's longtime involvement with abortion procedures, though these were not involved in the Title X grant.

Mulroy's explanation for his 2011 vote is that a) the votes for CCHS were already there; b) by concurring with the majority, he had been able to bargain with CCHS to secure serious statistical monitoring of their services; and c) those statistics had by now shown a dramatic lowering of effectiveness from Planned Parenthood's time.

Although he could not muster the commission's votes for his resolution for rebidding the Title X contract, Mulroy still believes the issue is revivable and can be used in the general election to pry a number of Poplar-corridor votes from Luttrell, who continues to approve of the CCHS arrangement.

As they say, time will tell. In the meantime, Mulroy has been able to cover a vulnerable flank against Deidre Malone, the original favorite of many party regulars, who had presented an across-the-board case against Luttrell in her own appearance before the Germantown Democrats earlier last month (chronicled in this space in the March 6th issue).

The third figure in the Democrats' mayoral sweepstakes, the Rev. Kenneth Whalum, will have an opportunity to present his own highly populist case before the Germantown group next Tuesday, April 15th. Like the previous two events, this one will take place at Coletta's Restaurant at Appling and Highway 64 in Cordova.

Even before that, all three Democratic rivals will appear in what is billed as a "debate," sponsored by the Shelby County Democratic Party this Thursday night at the Professional Building, 3385 Airways Boulevard, from 7 to 9 p.m.

• The 2014 election season has already been rich in candidate forums and is destined to see many more in run-ups to each of the year's three key election dates — May 6th, when Democratic and Republican primaries are held for county offices; August 7th, when the countywide general election, judicial elections, Shelby County Schools board elections, and party primaries for state and federal positions all take place; and November 4th, when the general election for state and federal offices is held.

The forums, which supplement isolated candidate appearances at fund-raisers, special functions, and meet and greet affairs, are invaluable ways for the general public to see aspirants for public office in the flesh. And — all other factors being equal — there would seem to be a curious correlation between participation in the forums by candidates and their success when ballots are actually cast.

This is despite the fact that, for most cases and most forums, the actual attendees are by and large limited to the candidates and their entourages. For one thing, media representatives may be there, whether or not bona fide audiences are. But somehow news gets out in some grapevine manner, even when direct press reports are not a factor. That has always been the case, but the growing prevalence of social media has made it even more so.

Social media have by no means displaced such traditional campaign modes as print and broadcast advertising, mailers, yard signs, telephone contacts, and door-to-door canvassing. But Twitter and Facebook, especially, have become valuable tools for communication with both the public and candidates' corps of supporters, and rare is the viable candidate who doesn't have an organized presence in these two venues.

Still, there are the forums — "cattle calls," as they are sometimes called, depending on how many races are represented among the attendees. In a big-ballot year like the present one, which includes the judgeship races that are scheduled for every eight years, there is the potential for much mooing and lowing, indeed.

To put it bluntly, some of the scheduled forums so far have, for such audiences as have been on hand, been endurance contests. On back-to-back evenings last month, Democratic and Republican groups (unidentified here, out of charity) held forums without imposing strict limits on time for candidates to speak.

As a result, some candidates — generally (but not always) those whose public profiles have previously been seriously limited and who, for a variety of reasons, have minimal chances of being elected to anything — will talk, to continue with our bovine metaphor, 'til the cows come home.

Indeed, there would seem to be a rough correlation between the impossibility of obscure candidates' getting enough votes to hold an office and the lengths to which they will go on dilating on their backgrounds, their prejudices, their platforms, their favorite sea stories, and even their health issues. It is as if the opportunity to stand up in front of a group of fellow citizens and hold forth indefinitely becomes a de facto substitute for the term of office they — and we — know they will never hold. (Ironically, a favorite theme of some of these filibuster-minded types is that of term limits.)

The obvious solution is to limit the cattle call to specific races, to prescribe specific and realistic time limits, and to hold the candidates to strict account in enforcing them.

A mixed blessing, by the way, was the action of Virgie Banks of the Democratic Women of Shelby County (DWSC) who, in explaining the ground rules for last Saturday's DWSC forum at the IBEW meeting hall on Madison, forbade "personal attacks" by candidates against their rivals.

Banks' decision was prompted by a handout, circulated in the building by an over-zealous P.R. person, which attacked a city councilmember running for county office this year for actions that might or might not be at issue in next year's council elections but, in any case, were irrelevant to the concerns of this year's election.

Kudos for Banks apropos the specific case at hand, but Saturday's omnium gatherum affair, despite well-intentioned efforts to ration clock time, went on too long for other reasons, including the allowing of stand-ins to speak for absent candidates, and might have profited from some sharpness of legitimate debate.

• The weekend's ceremonial reopening of a renovated National Civil Rights Museum (NCRM) contained several stellar moments — not least the outpouring, from local and visiting participants alike, of well-earned tributes to retiring museum president Beverly Robertson and the reconciliation of personalities whose past work facilitated both the edifice itself and the cause of human dignity that it represents.

A case in point was Saturday's "Community Day" event, which culminated in the symbolic breaking of chains and the release of doves before the museum's door were reopened to the general public. D'Army Bailey, who can honestly lay claim to being the principal founder of the museum, shared the platform harmoniously with Ninth District Congressman Steve Cohen, a onetime critic, and paid generous homage to other principals in the NCRM's history, including the late broadcast eminence Chuck Scruggs and longtime board member and Executive Committee Chairman J.R. "Pitt" Hyde III, with both of whom Bailey occasionally had differences, and vice versa.

The pièce de résistance in the day's show of unity, however, may have come from the presence on stage of Bobby Seale, the co-founder of the Black Panther Party and former "Chicago Eight" defendant whose very participation indicated a closing of the gap between radical perspectives of the past and the mainstream of today. 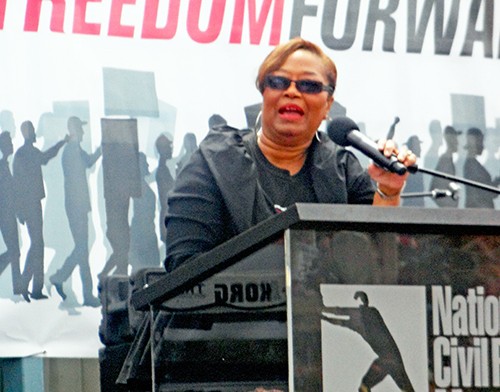