Texting While Driving Remains a Problem Despite Law

In July 2009, a law prohibiting texting while driving went into effect in Tennessee. The law's passage was profiled in the July 2009 Flyer article, "Driving While Intexticated," by Bianca Phillips.

Although the state law was in effect, a local ordinance hadn't been passed by Memphis City Council at the time the story was published. It did, however, pass a couple months later. Sponsored by City Councilman Jim Strickland, the ordinance went into effect September 2009.

Under the law, a person is prohibited from texting while operating a motor vehicle. And anyone who is caught in violation of the law can receive a maximum fine of $50. The violation is a Class C misdemeanor and doesn't appear on a person's driving record. 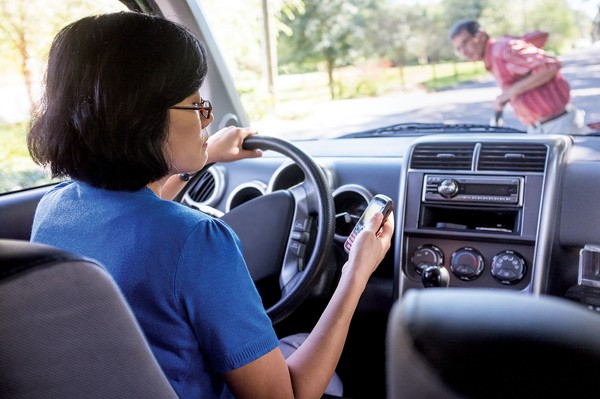 "The trends in Memphis statistics have shown that DUI fatalities have gone down and a great increase of people who are actually killed texting and driving," Pope said.

Similar to drunken drivers, law enforcement looks for signs like swerving, constant acceleration and braking, and other moving violations to help determine if a person is texting while driving. An officer normally follows the driver for a couple minutes to see if the erratic behavior continues and scopes the activity inside of their vehicle.

"The first indicator is when we see someone holding their cell phone up," Pope said. "We can see through the side view mirrors or rearview mirrors [or we] can see the electronic device being illuminated. Once we see a person with the actual device, it gives us the probable cause to stop their vehicle."

Seth Abrutyn is a Memphis driver who supports the ban on texting while driving. He thinks by prohibiting the activity, streets will become safer.

"Banning it reduces the number of people doing it and makes people more wary. And it increases revenue for the police department and city," said Abrutyn, assistant professor of sociology at the University of Memphis. "Let's face it: Memphians are terrible drivers. Everyone has witnessed the guy or girl in the far left lane make a right turn across three lanes without any warning and very rapidly. So, anything that helps the rest of us is a good thing."

Pope agrees with Abrutyn. By penalizing people for texting while driving, he thinks accidents will be lessened and more lives will be saved.

"A lot of people know that we're out looking now, so they're starting to obey the laws and put their phones away," Pope said. "We do a lot of campaigns in schools for teenagers and tell them not to text and drive. If somebody is texting you while driving, just put the phone away, because your response is not that important. You can call that person when you get to a place where you can park your car. And be mindful that your texting and driving not only puts your life in danger, but the lives of other citizens in danger. It's a crucial thing that we all need to be mindful of. Just don't text and drive."