Some surprisely good beer comes out of Southeast Asia.

When thinking of beer cultures, the mind tends toward Europeans in the cold or undergraduates at the lake. Rarely does the mind leap to Southeast Asia. Yet, last year alone, for example, Vietnam's 92 million citizens kicked backed roughly a billion gallons of beer. Mostly lagers, designed to go with the food. And, oh yes, the food!

Fortunately, Memphis has a diverse enough population to support some great restaurants serving authentic fare from places such as Thailand and Vietnam. Like a lot of Memphians, I was traumatized by the fall of the late great Saigon Le, but it was there that I was first reminded of the old adage for pairing food and drink that "what grows together, goes together."

Admittedly, the region was a little late to the beer-brewing game. The French introduced the first brewery to Vietnam in the late 19th century. Probably knowing their real strength was in wine, they introduced German-style pale lagers, because wouldn't you? Lagers, brewed using a cold-fermentation process, are lighter on the palate and just taste better cold than more flavor-forward ale varieties. That's no small matter when its 85 degrees at midnight. Nearby Thailand was never colonized by a western power, but also began to pick up a taste for the stuff. 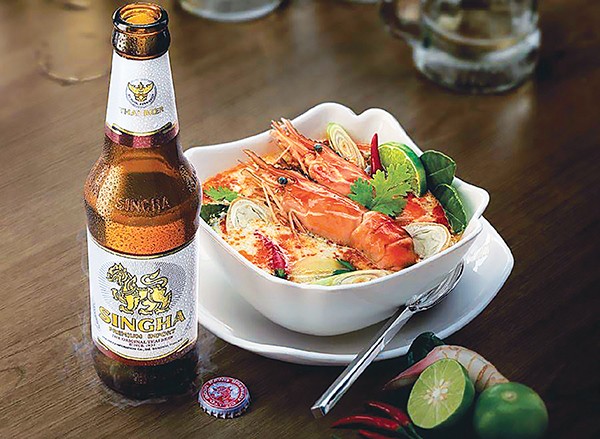 The locals, doing what locals always do, began to tweak the original product to local tastes and environments. Consider what the Japanese did when introduced to Scottish whisky: They produced a lighter, more delicate version of the same. Or what the Americans did to Japanese sushi with the California roll.

In the incipient sweltering heat and humidity, Asian brewers lightened the German lagers up somewhat but, in the best cases, kept a flavor that would play well with the variety of spices that they most certainly did not get from Europeans. Few of these beers are as readily available stateside as European imports, but there are a couple of exceptions. One of the best examples available locally is Singha (pronounced "Sing"), brewed since 1933 at the oldest brewery in Thailand. It is certainly the best-known Thai beer in the U.S. Head to Bhan Thai restaurant on Peabody; if you eat inside or on the patio, it's suitable for even the dreaded first date. Or have a drink at the back bar, an open-air wooden structure that looks like something you actually might find in the home country. One of my favorite dishes is the green curry. The pad thai is also excellent, and the menu is extensive and as spicy as you want it. This is where a Singha plays well — it's light, but not watered down, with a malty taste that compliments bold flavors and dries quickly on the palate.

Bhan Thai is actually one of the first places I took the future Mrs. M, and it's been a favorite of ours ever since. The last time we went, we got battered by sheets of driving rain, forcing us to take cover in the back bar. Personally, I thought that the monsoon-like conditions added a nice touch of authenticity to the evening, like being hurled bodily into a Graham Greene novel.

If you are attempting these flavors at home — or reading your Graham Greene — and want a beer literally brewed with oppressive humidity in mind, Tiger beer is available at the Cash Saver's mighty Hall of Beer. It lacks the malty finish of Singha, but it's fun and a little different without being too different.

Tiger has been brewed in Singapore since 1932 when, the company claims, it pioneered an innovative process called "tropical lagering." Management is pretty vague on what this process entails, exactly, but my semi-educated guess is that it's a fancy way of saying they employ refrigeration somewhere in the process.