Can we break the cycle of bird-on-pig violence?

Hi, I'm sitting here in a preview screening of The Angry Birds Movie. Since not much is actually happening onscreen, I've decided to get a jump on things and just write the review in my notebook as the film is still rolling.

If you can think back to a time before your smartphone-addled brain was totally besotted with Dat Boi memes, you'll recall Angry Birds, the quirky, little game you used to play on your iPhone 3 where you flung birds into a stack of crudely rendered objects built by pigs. The goal was to bring the pigs' house of cards down around them by knocking out just the right Jenga block, or whatever other mixed metaphor you want to use to describe the dead-simple game mechanics. Physics games are the oldest computer-game genre. Like Pong, the idea is that you simulate some very simple physical movement, give the player a limited way to interact with the moving virtual object, and set a goal that sounds simple, but requires a surprisingly delicate touch to achieve consistently, and boom, you've got a mildly addictive game that combines all of the pleasing OCD elements of golf without the bother of having to actually hang out with golfers. So you played Angry Birds for a while back in 2012 until the novelty wore off and you forgot about it quicker than you can say "O shit whaddup." 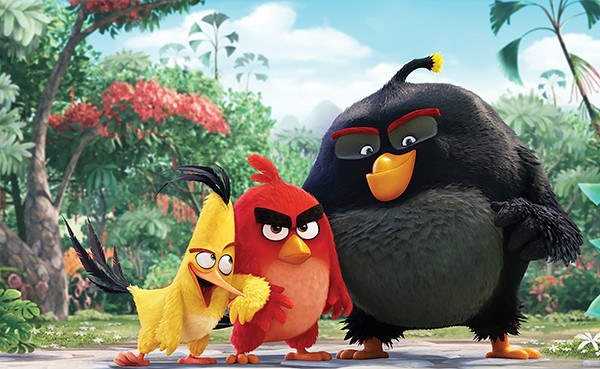 As I'm still here waiting for this hideous little red bird named Red (voiced by Jason Sudeikis) to do something, I fondly recall Breakout. If Pong was the Elvis of physics games, Breakout was the Beatles. It turned the Pong paradigm on its side and gave players an exciting new goal: Knock down a brick wall with this bouncing ball. I played Super Breakout obsessively when I was 10 years old, and I got really good at it, but not once did I ever stop to consider the ball or the paddle's motivations. Angry Birds' designers Rovio Entertainment replaced the paddle and ball with a slingshot and some cute little birds, so now I'm waiting for something to happen to this hateful little bird, probably pig-related.

I'm back from a bathroom break. While I was bellied up at the urinal, a little boy of about 5 years old walked up to me, eyes at crotch level.

We stood there like that for a moment until he said, "Whatcha doing?"

I wanted to say, "Well, I'm trying to pee, but I'm having trouble because you're staring at my junk," but instead I just glared at him until he ran away.

Anyway the pigs have arrived. They've got technology, unlike the birds, who for some reason can't fly and haven't even developed the slingshot yet. The pigs arrived in big, ugly boats with a hold full of secret tech, and I thought, oh cool, the Angry Birds are anticolonialist. But then, Mr. Red harnessed the power of his anger to convince the other birds that the thieving immigrants were ruining Bird Island, and I was like, oh shit waddup, Angry Birds are straight up fascist!

But my heart's not in it. There's no political agenda here. There's no reason for a narrative at all. The visceral little thrill you get from finding just the right angle to launch your projectile and topple the target is Angry Birds' reason for being, and it's completely alien to the narrative film experience.

Now Mr. Red is climbing a mountain in search of an eagle. What is this, freakin' Lord of the Rings? Get on with it already. Maybe if he had a slingshot, he could have launched himself to the top of that mountain. And why am I even being asked to invest in these cute little bird characters when I know their ultimate fate is a slingshot-launched kamikaze mission? Why do pigs live in such precarious cities, anyway? It's all so horrible. The pigs blow up Bird Island, and then the birds suicide bomb Piggie Island. Now none of the animals have a place to live. Where does it end?