The Art of Eso Tolson

The art of Eso Tolson.

Eso Tolson embraces his inner Memphis. In fact, he came up with the phrase "Embrace Your Inner Memphis."

When he's not programming and booking artists as Crosstown Arts performance coordinator or making his own art, Tolson, 34, posts empowering messages on Instagram.

"Embrace Your Inner Memphis" got "the most likes, and local organizations and businesses shared it the first time I had put it out," Tolson says. "It had gotten so much attention at that time that somebody wanted it on a shirt." 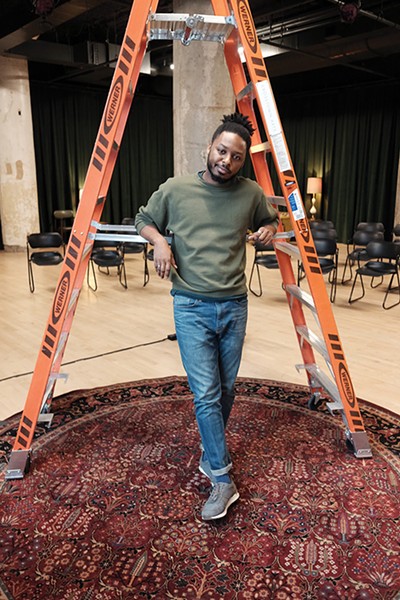 To make sure nobody stole his phrase, Tolson put up a website and had T-shirts silk screened with the words. "It turned into a whole thing. It's a campaign now — 'Embrace Your Inner Memphis.' The goal is basically for people to take the good and even the not-so-good about the city and realize that those things are what makes the city what it is.

"Everything that the entire world loves about America is in Memphis. Everything from the music, the food, the culture, the rich history. People from all over the world come here. The talent here is unmatched."

And, he says, "Some of the worst things about America are here at the same time. Everything from racism to inequality."

But, he says, "What that does is create this environment where all these amazing things can happen. The blues came about because of the pain that's here. [It] turned that pain into something. Into art. It's this beautiful pain that Memphis has that creates so many beautiful things.

"I'm not even from Memphis, and I love this city. I think when you embrace it, it takes on a whole new meaning."

Tolson, who is from East St. Louis, expressed his creativity for the first time at age 2. He took his grandmother's red nail polish, which was on the bedside table, and "went to town" with it "all over the bedsheets." (Brand new, by the way.)

When he was 10, Tolson won first place in a Mr. Bubbles coloring contest.

He excelled at sports, including track, in junior high and high school, but he also designed jogging suits.

He moved to Memphis in 2008 after discovering Memphis College of Art. He studied design arts with an emphasis in graphic design.

During his last semester, Tolson helped form a musical group, Artistik Approach, which still performs. "We do a little bit of jazz, hip-hop, soul, and we just create. Put it all out and make it our own."

After he graduated, Tolson began doing promotional work, including posters and brochures, for organizations, including Collage Dance Collective. "I like type and really dynamic imagery."

He also worked with Choose901 for about two years after making their first promotional video. "I remember getting my first paycheck. I went to the Art Center, bought a sketchbook, got some Sharpies, got some micro pens, and I was like, 'I'm just going to town and coming up with all these different phrases, sayings, and compositions of words.'"

He loves the power of words. "I was always attracted to just words. And I like how they look. I just like the letter forms in general. And I like that they can be visually pleasing, but also they can mean something. You can take something away from the image as well."

"Keep going" and "Make dope stuff every day" are two of his most popular posts.

He paints some of his words and phrases on canvas. One he did for Teach For America, which is at Crosstown Concourse, basically says one day all children will "have the opportunity to have access to an excellent education."

Tolson's works are currently on view at his "Spectacular Vernacular" show at Memphis College of Art, which runs through December 14th. "They're all words."