The Ballad of Buster Scruggs

The Coen Bros. take a torch to the Old West

The image of the cowboy emerged at roughly the same time as America entered the 20th century. Although his stories are usually set in the late 1800s, the first fictional cowboy was the eponymous star of Owen Wister's 1902 novel The Virginian. In the first chapters, the Virginian is called a son of a bitch by two different men. He shares a laugh with one and threatens the second one with a drawn pistol in the midst of a poker game. "When you call me that, SMILE!"

The genre The Virginian inspired, the Western, has had a huge influence on the American self-image. No matter how woke we believe ourselves to be, inside each of us are fragments of the self-sufficient, rugged individualist, gregarious to his friends but given to sudden flashes of murderous temper when challenged. For better or worse, the cowboy is at the core of the stories Americans tell about ourselves. 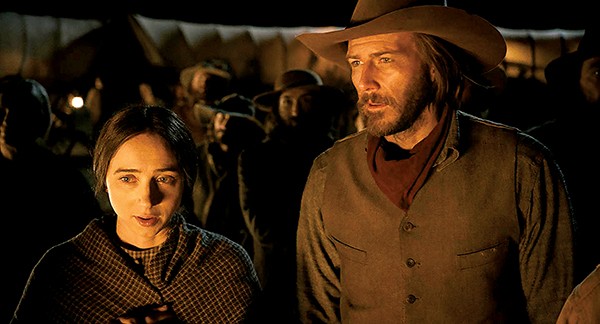 You will never see a trope exploded with more elan than the Coen Brothers bring to the screen in the first, eponymous segment of The Ballad of Buster Scruggs. At some point during Tim Blake Nelson's (initially) consequence-free, musical murder spree, it will occur to you that the whole singing cowboy thing has always been kinda messed up. Nelson's aw-shucks deadpan, which holds while he's singing on horseback and delivering blistering rounds of ultraviolence is a wonder to behold. The image of a face with a single bullet hole to the forehead, like a third eye opening, recurs during the six segments of this anthology. The short sketches written by Joel and Ethan Coen are presented like chapters in a Virginian-era book of Western stories. The Coens, who have never seen a genre they didn't want to tear down and rebuild from first principles, want to go back to the source of the American self-image and ask some questions.

After puncturing Gene Autry's balloon, the Coens go full Ambrose Bierce in "Near Algodones." James Franco is a hapless, would-be bandit whose convoluted comeuppance makes a mockery of the notion that we are in any way in charge of our own fate.

In "Meal Ticket," the Brothers take on the perverse incentives and human cost imposed by buccaneer capitalism. Harry Melling plays an actor with no arms or legs who flawlessly delivers lines from Coleridge, Shakespeare, and Lincoln, while Liam Neeson, in a nearly wordless performance, is the sideshow impresario who both supports and exploits him.

The film's best casting choice is reserved for "All Gold Canyon," an adaptation of a Jack London short story starring musician Tom Waits. Has no one ever thought to cast the sandpaper-voiced Waits as a a grizzled old prospector before, or was he just holding out for the right directors? Either way, it was worth the wait.

From the literature, it looks like taming the Old West was a pretty masculine affair. We've all seen Brokeback Mountain. The plight of the women in the wagon trains is the focus of "The Girl Who Got Rattled." Alice Longabaugh (Zoe Kazan) is an unwilling traveler on the Oregon Trail, dragged along by her elder brother Gilbert (Jefferson Mays) to be married off to an orchard owner at their Western destination. She finds an unexpected romantic opportunity in the person of trail rider Billy Knapp (Bill Heck) and reels when her constrained world is suddenly freed by the possibility of free will and happiness. In the final segment, "The Mortal Remains," a pious lady (Tyne Daly), a Frenchman (Saul Rubinek), and a talkative trapper (Chelcie Ross) share a long stagecoach ride with a pair of mysterious bad men (Jonjo O'Neill and Brendan Gleeson). It is a troubling thesis statement for the film, that owes a visual debt to The Hateful Eight while underlining the Coens' existentialism.

The Coens, who have been among the greatest American filmmakers for almost three decades now, want to look at the Western in a new way, and they're choosing a new way of filmmaking. It's the Coens' first all-digital production, so longtime cinematographer Roger Deakins is replaced by Inside Llewyn Davis lenser Bruno Delbonnel.

The film got an enthusiastic reception at the Venice Film Festival this year, where it won Best Screenplay, but outside of a limited release to qualify for Oscar competition, it's available solely on Netflix. Whether it would have been a financial success in theaters, we'll never know — though True Grit, the Coens' last western adventure, made a wagon train full of money. On an artistic level, The Ballad of Buster Scruggs is an unreserved success.