The Book of Mormon at the Orpheum 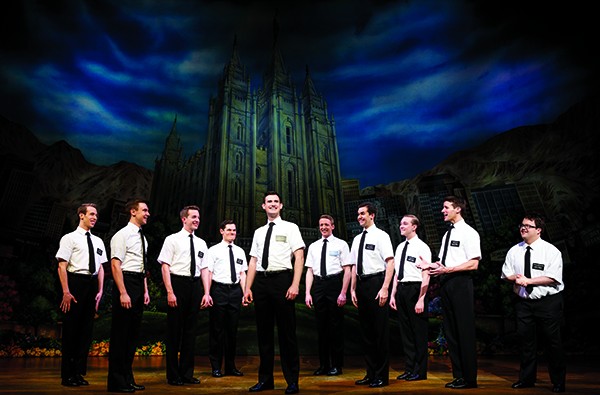 Canadians and Mormons are practically the same thing, right? That's why Ryan Bondy, formerly of Canada, was literally born to play Elder Price in The Book of Mormon, Trey Parker and Matt Stone's relentlessly profane musical. "If you mean we're really nice, and we like to talk then, yes, we're exactly alike," Bondy affirms.

The Book of Mormon is a satirical buddy story in the spirit of the old Bob Hope/Bing Crosby road pictures. It tells the story of two missionaries with conflicting personalities who are sent to Uganda to recruit more Mormons. Their efforts are challenged by famine, disease, and a warlord with an unprintable name.

"Out of all the shows that I've done in my career, this is absolutely the most fun I've ever had," Bondy says. "Anybody who's familiar with Parker and Stone and South Park knows that those guys don't necessarily write anything that's not funny. And it's not just about the humor. There's so much heart and real character opportunity. This is a reality of what Mormons have to go through in regards to their mission and the reality of their journey and the reality of what was going on in Uganda, a godless place full of poverty, AIDS, and starvation."

The Book of Mormon opened to rave reviews in 2011. The show picked up 14 Tony nominations and nine wins, including Best Musical. After all this time, and in spite of near-universal praise, Bondy says people still come out to protest the show. "They don't necessarily do their research as to what The Book of Mormon is really about," he says. "A good indication should be that the Mormons themselves love the show. Now when they go out on their missions, they're not allowed to see it. But there are a lot of elders standing outside the show afterwards, handing out books and talking to people. And they have seen it. The Book of Mormon does the very first thing Mormons need — it starts a conversation. So they even take ads out in our programs that say, 'You've seen the play, now read the book.'"

We Recommend The book of Mormon The Orpheum Ryan Bondy