A visit to the colorful Mi Tierra.

Imagine a whimsical wonderland of sombreros vueltiaos, artificial flowers, and empanadas right near the Memphis-Bartlett border, a true "beach within reach," a wild place of music, décor, and margaritas to which words can't do justice. That's Mi Tierra, a Colombian restaurant at 5883 Summer, and that's where we ventured last week for a change of pace and just the right amount of tequila.

Mi Tierra is nestled in a bizarre shopping center, but it's hard to miss with its bright colors and Colombian flags. The first thing that greets you is a sandy beach out front. This is a beachside bungalow of a restaurant, complete with two covered patios and fake parrots aplenty. Inside, no surface goes uncovered. From the windows to the walls, it's a tropical canopy, a mish-mash of tiki and jungle, a fanciful paradise. Mirna Garcia, the owner, explains, "We go for decorations here." 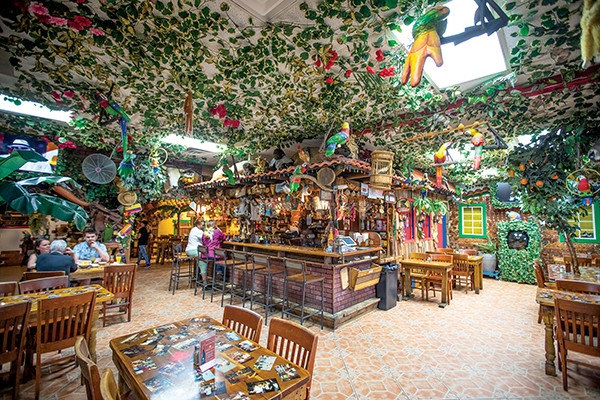 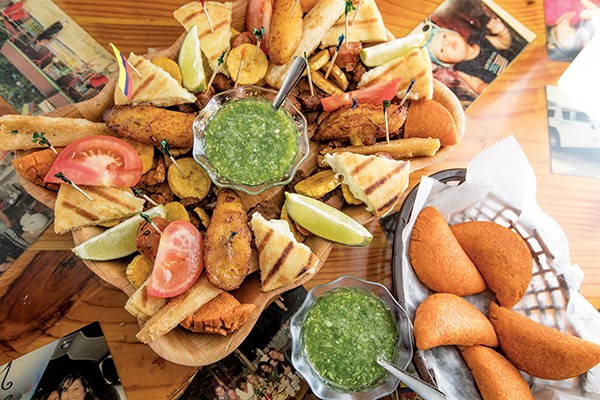 Garcia opened Mi Tierra nearly 16 years ago; this Halloween will mark her official anniversary. She has had plenty to celebrate in those 16 years. Besides her weekly reggae parties and Saturday late nights, she is also a regular competitor in the Flyer's annual Margarita Festival. Last year, she won second place with her passion fruit margarita, a delicious concoction that wholly masked the tequila, which could be dangerous on a warm patio day.

Speaking of patios, Mi Tierra does it right. Besides their front porch patio, they also feature a large covered patio to the side of the building. It's the perfect place to throw a real afternoon rager. There's a bar, TVs, and enough seating to accommodate 50 of your most fun-loving friends. Owing to its roof, this is a patio to be enjoyed whenever it's warm, rain or shine. The patio is just one of many hidden gems lurking in the restaurant, though.

While exploring the restaurant, there's a lot to take in. More so than any other place I've visited (and I've been to a lot of Cracker Barrels), Mi Tierra is absolutely covered. The flowers above hide large speakers (and at least one speaker is wearing a soccer kit) and televisions. There's a fish bowl in one wall, small houses embedded in another, and a large drop-down screen that, the night we visited, was showing some salsa dancing. Mi Tierra celebrates its regulars and its history by showcasing photos on each table and I aim to make it in a table photo one of these days (disregard that print film is on the outs; I've always wanted to be a table photo person and this seems like the place to be one). 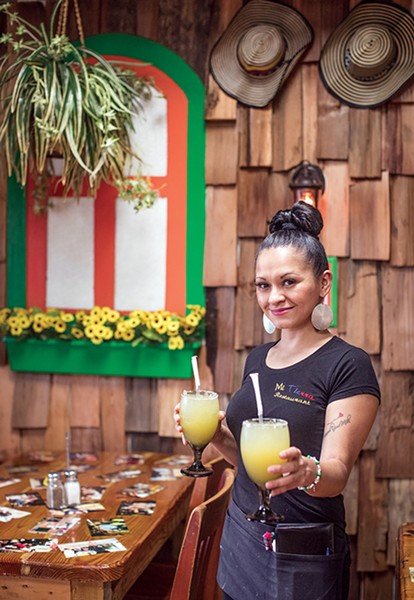 Mi Tierra is yet another place that caters to the very deserving service industry crowd. As Garcia says, "At 10 p.m., the lights go down and the music goes up!" She keeps the bar open until 3 a.m. and the kitchen open until 2 a.m. on the weekends for late-night entertaining, dancing, and revelry. For those looking for delicious food after-hours, this is the place. We enjoyed a large platter between four of us full of plantains, empanadas, arepas, various meats, and a cilantro dipping sauce that was unbelievably good. None among us, however, was willing to order the mysterious bebida con queso. My Spanish is at the intermediate level, but if my translation is correct, it'll take more than three margaritas for me to try a cheese drink. But the margaritas! They were delicious. It's easy to see why this group took second place in the Margarita Festival and why I'll be rooting for them to take home the first place prize this year.

As is well-established, I often go to bars in the Midtown and Downtown areas and don't venture out to the Bartlett area for much. We could all take a page from Bartlett's book, though, and support such a thriving Latino-owned culinary scene. Mi Tierra is one of many treasures in the area, and with a patio and drinks like that, it should be a go-to spot for not just Bartlett-dwellers but all the rest of us, too. Don't believe me? Check out the length of their line at the Margarita Festival and let that do the talking.