Eddie Redmayne won last year's Academy Award for Best Actor with his portrayal of astrophysicist Stephen Hawking in The Theory of Everything. Portraying Hawking's slowly wasting body while communicating the brilliance of his mind carried an extremely high degree of difficulty, and Redmayne demonstrated incredible physical discipline to pull it off. Director Tom Hooper surely saw that uncanny skill set when he cast the actor to play Lili Elbe, the pioneering, tragic figure at the center of his historical drama The Danish Girl, and there's a pretty good chance that Redmayne will bring home his second Best Actor Oscar in a row.

Lili Elbe started life as Einar Wegener, a renown landscape painter living in 1920s Copenhagen with his wife Gerda (Alicia Vikander). The pair are inseparable, and Einar will do anything for his bride, including posing in women's clothing to help her paint a portrait of a ballerina. That slightly racy but seemingly innocuous gesture sets off something deep in Einar's psyche, and Gerda — up for a little kink like any good bohemian artist-type worth her salt — is more than happy to play along. But things start to get weird when Gerda and Einar take their game public, when she convinces him to dress as a woman as they attend a Copenhagen artist's ball. The alter ego they create, a provincial Danish girl name Lili, gradually begins to take over Einar's personality, testing the limits of their love and society's acceptance of transgendered people. 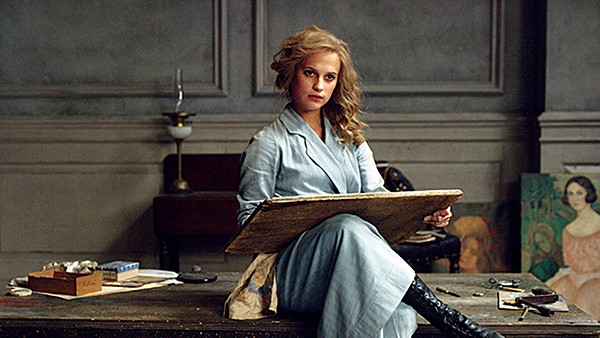 Redmayne's performance blurs the line between acting and dance as he conveys Einar/Lili's fluid sexual identity with alternately masculine and feminine postures and gestures. It's an amazing performance, made even more heartrending when paired with Vikander's deeply empathetic Gerda. The pair create a little bubble of possibility and acceptance in the stifling European conservatism that infects even the artistic circles in which they run.

Like Hooper's 2010 film The King's Speech, The Danish Girl is solidly constructed but suffers from the usual period-costume-drama maladies of padded length and occasional preciousness. But unlike Hooper's 2012 adaptation of Les Misérables, it avoids big, baffling missteps — like letting Russell Crowe sing. The cinematography is lush and fashionable — I think this is the only time I've ever written "Nice lens choice!" in my notebook. If seeing a pair of world-class actors surrounded by impeccable art design create fully rounded characters sounds like a good time to you, then The Danish Girl is not to be missed.