The Departure of Jones and Tate; The Return of Harold Ford Jr.

On the whole, it was a bad week — or at least a sad one — for the political community of Memphis. The city lost two veterans of legislative service — via the deaths of former state Representative Rufus Jones and former state Senator Reginald Tate.

There was one redeeming high note — the return to town, for a much-appreciated visit, anyhow, of another former public official. That was former Memphis Congressman Harold Ford Jr., now a resident of New York and serving as chairman of RxSaver, a health-care company.

Ford, who represented the city's 9th congressional district from 1996 to 2006, addressed a luncheon crowd on Tuesday at the Westin Hotel as part of the Rotary Halloran Speaker Series, a joint effort of the Rotary Club of Memphis and former Orpheum president Pat Halloran. 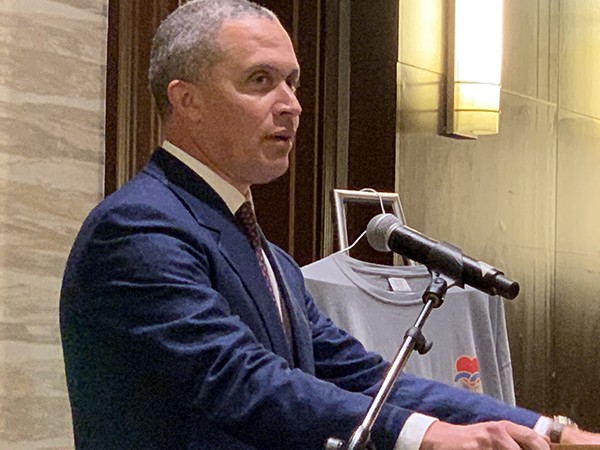 The essence of Ford's speech was a catch-up on his (and his family's) personal circumstances for the attendees, but he was willing to address political matters as well. He began with a courtesy nod to the Trump supporters in the audience, saying that if the president's much-encumbered name happened not to be attached to many of his policy initiatives, some of them would appear to be, relatively speaking, "decent."

But, asked about the current Syrian fiasco, caused by the president's unexpected and abrupt withdrawal of an American tripwire force there, Ford opined that Trump's action triggered a view of him in the world at large as "unpredictable" in a way that communicated an ominous sense of weakness.

• Even as members of Shelby County's political community, Democrats and Republicans alike, were mourning the death on Sunday of Jones, a member of  the state House of Representatives from 1980 to 1996, they found themselves having to deal as well with the loss on Monday of former state Senator Tate, whose tenure in the state Senate ran from 2006 to 2018.

Both Jones and Tate served as Democrats — Jones during a period in which his party commanded a comfortable majority in his chamber and in the legislature at large, Tate during an era of Republican control of both the Senate and the General Assembly. Both Jones and Tate had business backgrounds, Jones as a member of a South Memphis family with grocery interests, Tate as president/CEO of an architectural firm.

Each of them was personally popular on both sides of the aisle, and each served during periods of political controversy that tested their commitment to pure partisanship. Jones' case was less demanding in that regard. Along with a majority of other legislative Democrats, he found himself working in harmony with Republican Governor Don Sundquist in an effort, ultimately unsuccessful, to pass a state income tax.

Representative G.A. Hardaway, chair of the Legislative Black Caucus and often a Democratic spokesman at large, sized things up this way: "Rufus E. Jones served as a ready and willing source of reliable and sound advice for myself and other legislators. Our families were close, and that allowed me to personally witness and learn from an excellent exemplar of personal conduct, professional success, and civic leadership."

Tate's situation was different. Lacking any party background as such, he had the support of his neighbor Sidney Chism, an influential Democrat and sometime party chairman, when the county Democratic Committee had to find a substitute nominee in 2006 for the Senate seat vacated by incumbent Kathryn Bowers, who would be tried as a suspect in the FBI's Tennessee Waltz corruption sting.

Tate was nominated and won. He entered the Senate during a time when control of that body was swinging from Democrats to Republicans, and he seems to have perceived his duty, both to himself and to his district, as that of maintaining good relations with the soon-to-be dominant GOP. Legislative Republicans, for their part, made sure to get him aboard key committees. Increasingly, he was seen by fellow Democrats to be overstepping political boundaries — even to the point of becoming a board member of the American Legislative Exchange Council (ALEC), a right-wing mill for ultra-conservative state legislation.

Matters came to a head in 2018, when Tate was up for re-election to a fourth four-year term. Not only had he aroused the ire of his party mates with his ever-increasing number of conservative votes, he was overheard on a hot microphone apparently uttering profane criticism of his fellow Democrats. It was less a judgment on his part than a sign of frustration as he saw one after another member of his party caucus side openly with his Democratic primary opponent in 2018, Katrina Robinson, an accomplished newcomer and proprietor of a nursing school.

It cost him; Tate would go down to defeat by a 2 to 1 margin, Robinson polling 14,140 votes to his 6,464, and she would go on to serve effectively as a member of the Senate Democratic minority.

Still, there was little rejoicing in party ranks at Tate's defeat. Even those who were opposed to his politics remained personally fond of the man whose people skills were of the highest order. Karen Camper, the Democrats' House Leader, was a particular friend, as was Democratic caucus chair Raumesh Akbari, who said, "No matter what the legislative issue was, he found a way to work with folks from both sides of the aisle and always thought of Memphis first. Senator Tate had a way of always making you smile, and I know he's smiling down on all of us today."

Shelby delegation chair Antonio Parkinson noted, "Senator Tate left an indelible mark on the state of Tennessee and its citizens through legislation that he sponsored and cosponsored over his many years at the Tennessee Legislature."

Senator Sara Kyle, who had been an explicit critic of Tate, said, "Senator Tate did many good things for the citizens of Shelby County during his time in the General Assembly, and I was shocked and saddened to learn of his passing. We will all miss his smile and good sense of humor." And Robinson, his electoral conqueror, also weighed in: "This is a sad day for Shelby County and our entire state. Thanks for 12 years of service to District 33."

Funeral arrangements had not been announced at press time.