When a famous actor dies in his or her prime, it can be a while before their final film is released. Peter Finch won a posthumous Oscar in 1976 for Network, as did Heath Ledger, who won for his performance as the Joker in 2008's The Dark Knight. James Gandolfini, who died in June 2013, was nominated posthumously for a passel of awards last year for starring opposite Julia Louis-Dreyfus in Enough Said. But, it turns out, that wasn't his final role. 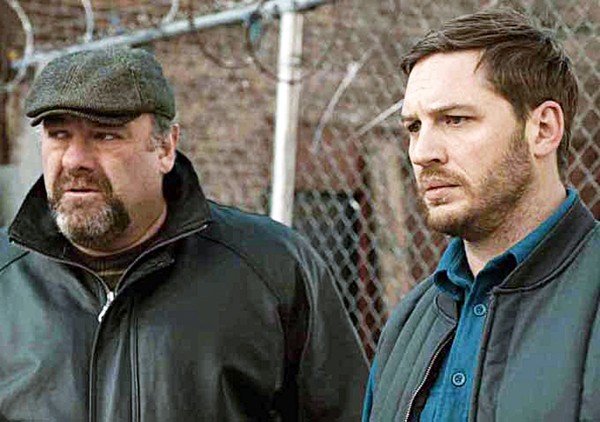 The run down Brooklyn environs where The Drop is set was familiar territory to Gandolfini, who spent 8 years across the river in New Jersey playing crime boss Tony in The Sopranos. Gandolfini's character in The Drop, Marv, was not much of a stretch for the late actor: He's pretty much just Tony Soprano, only he's not very good at being a gangster. He used to own his own bar, Cousin Marv's, but then he got into some trouble with gambling debts and lost control of the place to a bunch of Chechen gangsters, led by Covka (Michael Aronov). But Marv is still a trusted, stand-up guy, and nowadays, his bar is one of many in the New York area used as a drop point for illegal gambling money destined for laundering.

These facts are laid out for the audience in an opening voice-over by Bob (Tom Hardy), the bartender at Cousin Marv's and, not coincidentally, Marv's actual cousin. The Drop is ostensibly Bob's story, but as you may have intuited from the fact that I'm halfway done with this review and I'm just now getting around to mentioning him, Hardy is overshadowed by Gandolfini at every turn.

Bob doesn't come across as too bright, and while he's at home behind the bar, he seems to drift through life detached from the world. He goes to 8 a.m. mass every morning at the local Catholic church, but he never takes communion. Walking home from the bar late one night, he finds a beaten, bloody pitbull puppy in a trashcan in front of a house that belongs to Nadia (Noomi Rapace). Bob, being the stoic, kind of slow guy that he is, doesn't know how to take care of a dog, so Nadia has to help him get up to speed on the subject, and sparks fly.

Actually, sparks completely fail to fly. Hardy has proven himself to be a good actor in roles such as this year's Locke and in 2011's Tinker Tailor Soldier Spy, but here, he takes taciturn to its ridiculous extreme. Subtlety is a virtue for a screen actor, but Hardy sleepwalks through The Drop. His alleged love interest Nadia is given so little to do (besides being kind to animals) that the single facial expression Rapace wears for the entire movie is appropriate. When feminist film writers complain about women whose only apparent function is to be put in peril to motivate the hero, Nadia is exactly what they're talking about. But if there's no chemistry between the hero and the damsel in distress, then it's pretty hard to care when she's in peril.

But then again, it's pretty hard to care about anything in The Drop. No one seems to express any emotion besides baseless machismo. The heist around which the plot revolves (robbing the drop bar on Superbowl Sunday when it is flush with cash) is pretty small potatoes — which, in a world where every movie hero has to save the world and/or universe, is actually kind of refreshing. Director Michael R. Roskam and writer Dennis Lehane are clearly going for a slow burn, but they turned in a no-burn. The camera loved Gandolfini to the end, and if you're a big fan, it's probably worth it to see him be the wiseguy one more time. But there's no other reason to recommend The Drop.

The Drop
Opens Friday, September 12th
Studio on the Square