Awkwafina steals the show in this touching Chinese/American family dramady

When I interviewed Tom Shadyac for this week's cover story about the making of Brian Banks, I asked the director about a certain phenomenon I and others have commented on over the years. Why is it that actors who started off in comedy have a much easier time transitioning to drama than vice versa? Tom Hanks, America's stalwart everyman actor, started off in the groundbreaking, cross-dressing TV comedy Bosom Buddies. Robin Williams, whom Shadyac directed in Patch Adams, started out in stand-up and on the classic comedy Mork and Mindy and then found great success in character-driven dramas like The Fisher King.

"Comedians always act," Shadyac says. "We're putting on a face, putting on a character. That is a much easier transition than teaching a dramatic actor the rhythms and the comedy timing it takes to be funny. It's a point of view, it's a delivery, it's a worldview, it's everything. It's a gift. I believe you can cultivate that gift, but you can't give the gift. You've either got the gift or not." 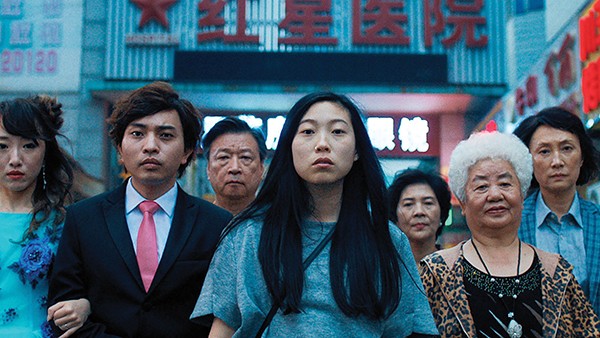 After seeing The Farewell, I can tell you that Awkwafina has the gift. Born Nora Lum in New York, she first attracted attention as a YouTube rapper with a satirical flow called "My Vag." She broke into film as the funniest thing in the dire comedy Neighbors 2: Sorority Rising and provided comic relief in the female-driven heist romp Ocean's 8. Her role as the wisecracking best friend to the reluctant bride in last year's Crazy Rich Asians threatened to overshadow star Constance Wu. Her vocal prowess and physical control in that film are a wonder to behold — playing the floppy party girl is a lot harder than it looks.

When we meet Awkwafina as Billi in The Farewell, she's in a familiar context — walking down the street in New York City, doing a comedy bit. She's talking on the phone with her grandmother (Shuzhen Zhao), whom she calls Nai Nai, and both of them are lying their assess off. Billi says her career as a writer is going great, when in fact it's going nowhere and she's in danger of getting kicked out of her apartment for not paying rent. Nai Nai says she's at her sister's place (named Little Nai Nai, and played by Hong Lu), when in fact she's at the hospital getting a CAT scan.

The results of the scan are very bad. Nai Nai has Stage 4 lung cancer, and the doctor tells Little Nai Nai her sister has only months to live. But instead of telling her the truth, Little Nai Nai lies and says the tests only returned a "benign shadow" in her lungs — shades of the "brain cloud", the ludicrously shoddy fake malady from Joe Versus the Volcano.

Instead of helping her make arrangements and peace with her life, her family decides to just not tell Nai Nai she's sick, citing an old Chinese folk belief, "It's not the cancer that kills you, it's the fear." They pressure cousin Hao Hao (Han Chen) to marry his Japanese girlfriend Aiko (Aoi Mizuhara) so the far-flung family will have an excuse to gather at the matriarch's side one last time.

At first, Billi's dad Haiyan (Tzi Ma) and mother Jian (Diana Lin) insist that she not come to the wedding because she can't be trusted to conceal her emotions. But she can't bear the thought of never seeing her grandmother again, and she shows up anyway — only to be greeted by Nai Nai as "stupid child."

Written and directed by Lulu Wang, The Farewell plays out around dinner tables like an Ira Sachs family drama with a cutting, deadpan sense of humor. Billi can't believe that no one is going to tell Nai Nai the truth, and at first, she seems determined to find the right time to break the news to her feisty grandmother. But opportunity after opportunity passes, and Billi finds herself playing along with the epic gaslighting. The internal conflict plays out over Awkwafina's face and body language in the way her shoulders slump a little when Nai Nai's back is turned and how she steels herself before giving a fake cheerful speech at the wedding.

Wang not only knows how to get the best performance out of her star, but, in keeping with the film's themes of Asian collectivism versus Western individualism, she spreads the love around the ensemble. Tzi Ma, a veteran character actor who played opposite Tom Hanks in The Money Pit, shines as Billi's alcoholic father who has been beat down by the domineering women around him. Aoi Mizuhara gives a mostly wordless performance as the hapless bride-to-be who doesn't speak either of the film's two languages and seems to have only a vague idea of the drama that's swirling around her wedding. But ultimately, it's Awkwafina who walks away with the picture, and it feels like the revelation of a major new talent.