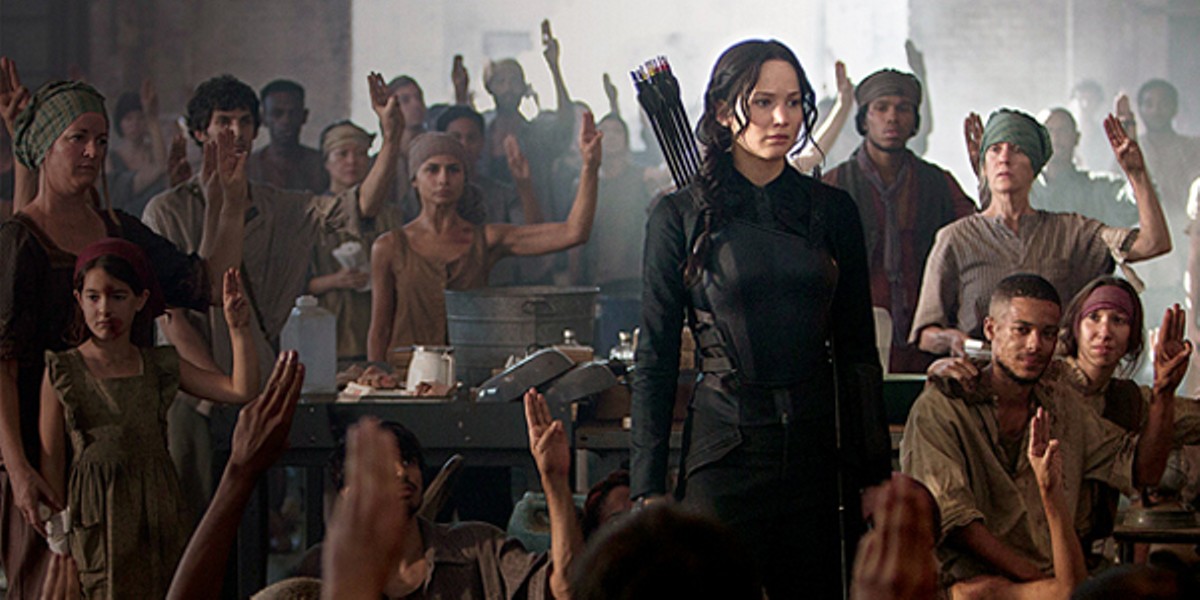 Being the final chapter ain't what it used to be. Nowadays, movie trilogies are likely to have four parts, thanks to the monetary aspirations of quarterly corporate profit-driven movie studios, robbing part three of its catharsis. It happened to Twilight, whose third literary chapter got uselessly split into two parts. The original plan to make The Hobbit into two movies got expanded into three, which meant that significant parts of the first two movies felt like the padding they were. And it happened to Harry Potter, whose closing chapter, The Deathly Hallows, was split in two a bit more successfully. Would Return of the Jedi have been better split into two parts with added Ewok action to fill in the gaps? Probably not. But it would seem that The Hunger Games film franchise has actually benefitted from splitting its final chapter in two, because Mockingjay - Part 1 is the best of the three films released so far.

The franchise got off to a rocky start in 2012 with the first film, where hero Katniss Everdeen (Jennifer Lawrence) volunteered to take the place of her sister Prim (Willow Shields) in the brutal gladiatorial-game-meets-reality-show that gives the series its name. Despite feeling rushed and incoherent, the first film made wheelbarrows full of money for Lionsgate and cemented Lawrence's star status. For Catching Fire, the producers wisely ditched director Gary Ross in favor of Francis Lawrence, who could at least stage a coherent action sequence, and sent Katniss back into the arena for a tournament of champions designed to discredit and kill the increasingly popular Girl On Fire. But our heroine survived, thanks to her out-of-the-box thinking and the actions of game-designer-turned-revolutionary Plutarch Heavensbee (Philip Seymour Hoffman).

As this third film opens, Katniss is fighting her raging PTSD in the rebel base deep under District 13. One of her two beaus Peeta (Josh Hutcherson) didn't make it out of the arena, but is still alive and being used as a propaganda shill by President Snow (a gleefully evil Donald Sutherland). Her other potential lover Gale (Liam Hemsworth) escaped the holocaust of District 12 and is now fighting for rebel President Alma Coin (Julianne Moore). Heavensbee and Coin want to use Katniss as a figurehead for the rebellion, but will the young woman known as The Mockingjay take up her mantle as a freedom fighter?

The weakness of splitting the final chapter of the story is that it makes Katniss' internal struggle the film's major conflict. Of course Katniss is going to take up her newly tricked-out bow against the evil Capitol, just like every hero since Odysseus has eventually responded after first refusing the call to adventure. But the strength of Mockingjay - Part 1 comes from the fact that the director and writers don't have to cram so many plot incidents from the dense source material into a regulation-sized movie, and so they are able to stretch out and focus on their greatest strength: Lawrence.

Katniss is the hero our moment needs: She's a working-class feminist fighting Das Kapital, represented by the patriarch Snow. She is tasteful and restrained in the face of the gaudy, late-stage capitalism of the ruling class — is there another epic adventure star who counts a stylist and a PR flack among their heroic band? She is a reality-TV star who sees through the artifice of the weaponized entertainment complex that is keeping her people subjugated. Like Humphrey Bogart's Rick or Harrison Ford's Indiana Jones, Lawrence fully inhabits Katniss as a character while also imbuing her with that mysterious movie star magic. Wearing the fierce thousand-yard stare of a seasoned warrior, she is the charismatic Che Guevara to President Coin's calculating Castro. Then she furtively includes her sister's cat among her list of demands to her new bosses, and you realize she's still a teenage girl. Lawrence outshines everyone else on the screen, even to the point of undermining the romantic triangle with Peeta and Gale. It's clear that neither one of these drips are worthy of Katniss, just as it's clear that there are few projects 21st century Hollywood could come up with that are worthy of Lawrence, so she had to make The Hunger Games her own.