I love a good con artist film. It's a different animal from a heist film, where the thrill is in the elaborate planning and then the reveal of how the plan worked out, or more often, didn't work out. In a con film, the fun comes from the fact that the con artists and the audience are in on the secret, and everybody else is in the dark. In The Sting, we become invested in Paul Newman and Robert Redford's massive parimutuel betting con. That's when it's played for fun. In The Grifters, Stephen Frears explored the dark side of the con. Anjelica Huston, John Cusack, and Annette Bening take turns trying to rip off the world and each other, but they're revealed to be not charming knaves, but the kind of abusive, amoral sociopaths who would actually con a person out of their last dollar.

Somewhere in between those two extremes is Dirty Rotten Scoundrels. Directed by Frank Oz, the 1988 film starred comedic superman Steve Martin and prestige actor with underutilized comic chops Michael Caine. Both are con men, but with dramatically different styles. Caine is a European sophisticate who knows where the rich, gullible widows are because he's from the milieu. Martin is something of a confidence idiot savant, disorienting his targets with a barrage of bullshit. The younger grifter wants to learn from the older grifter, but they end up at odds — neither one of them is exactly trustworthy, you see. There ain't room enough in the French Riviera for the two of them, so they make a bet: The first one to con a rich heiress out of $50,000 wins, and the loser must leave town.

Dirty Rotten Scoundrels isn't the greatest comedy of the '80s, but it definitely has its moments, and a couple of decades as basic cable fare has earned it an audience. It's ripe for a remake, and as you know, 21st-century Hollywood abhors a remake vacuum. Or something. 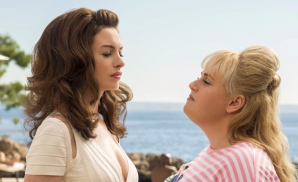 The driving force of The Hustle is Rebel Wilson, Australian comedian who produced the film and stars in the Steve Martin role. Wilson's Penny Rust is a professional catfisher who reels in her rich, conceited, yet dopy marks on Tinder. She falls victim to the con artist's biggest occupational hazard: when you've been too successful and you've got to leave town ahead of your vengeful victims.

Inspired by a travel magazine, she sets off to France, where, by chance, she meets Josephine Chesterfield, played by Anne Hathaway. Josephine has refined conning old men out of their excess capital into a science. She does her research, surveils her targets, and then hits them in their most psychologically vulnerable spots. From the moment she sees Penny on a train talking a guy out of a free dinner, she recognizes the game. Fearing an oversaturated con market in the hoity toity French Riviera town she prowls, Josephine tries to misdirect Penny. But the ugly American keeps coming back, and the two prideful con artists are off, trying to one-up each other for money, jewels, and bragging rights.

Like Martin and Caine, Hathaway and Wilson have the chemistry to pull this off. Josephine, who at one point gives a speech about how the best way for a woman to con a man is to let him underestimate her, repeatedly underestimates Penny's cunning. The mark the two artists compete to fleece out of an inflation-adjusted $500,000 is Thomas Westerburg (Alex Sharp), a newly minted tech billionaire who needs to be relieved of the burden of so much IPO cash. In true con movie fashion, he turns out to be more than meets the eye.

British comedy actor Chris Addison makes his directorial debut with The Hustle, and he may be the problem with the film. Hathaway has too much fun flipping through her portfolio of accents and wardrobe of slinky dresses, while Wilson is having a blast doing physical comedy. Like in its inspiration, there are a high points where it all works, such as when Hathaway takes the personae of a severe German psychologist to cure Wilson's faked hysterical blindness. It's well edited, and there are no obvious, throw it against the wall improv passages, which have marred recent comedies like the Ghostbusters remake.

And yet, The Hustle never really gels to become more than a sum of its parts. Martin and Caine seemed to genuinely dislike each other, which gave Dirty Rotten Scoundrels an air of transgressive danger. Wilson and Hathaway seem like friends playing out a silly bet. They're too comfortable, and too safe. I didn't hate this movie, but the laughs never reached critical mass for me, either. Like What Men Want, it's a gender flipped comedy remake that ultimately fails to rise to the quality of the onscreen talent.