With The Irishman, Scorsese closes the book on the Cosa Nostra.

I need to begin this review with a confession: I'm sick of mob movies. Francis Ford Coppola's The Godfather is, of course, a great film. I was reminded of this fact recently as I drifted off to sleep with the BBC America Godfather marathon on in the background. Before he became scourge of the Marvel Universe, Martin Scorsese made some incredible films about organized crime and the Italian-American immigrant community, starting with Mean Streets, which was also his first team-up with The Godfather: Part II star Robert De Niro. Goodfellas, Casino, Gangs of New York, and The Departed are all great examples of the genre from Marty.

Somewhere along the way, Scorsese became a brand-name synonymous in some circles with mob pictures. Never mind that the vast majority of his film output has nothing to do with New York mobsters. Taxi Driver, arguably his masterpiece, is an irony-soaked story about a lonely PTSD-suffering vet's descent into political assassination. The Aviator, one of my favorites, is a biography of Howard Hughes. And have you watched The Last Temptation of Christ lately? I'd argue that film was his real masterpiece, except that I think he's entitled to more than one. 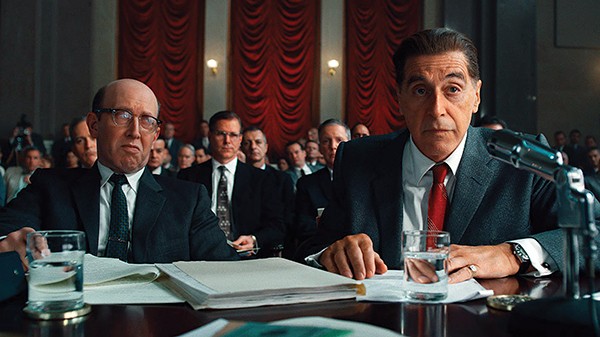 But for a couple of generations of filmmakers, "Scorsese" plus "mob picture" equalled "good cinema," and, boy, did they lean into it. From The Sopranos to Good Time, there's no shortage of films about male bonding over crime, violence, and honor culture starring a bunch of identical-looking guys mumbling in thick accents. Haven't we seen enough of this?

The Irishman, though, that's different, right? This is Scorsese's long-gestating dream project, the story of the rise and fall of Teamsters Union President Jimmy Hoffa, detailing the intersection of politics and crime, spanning the American Century. It's got De Niro, Al Pacino, and Joe Pesci — the mob film trifecta! The director and star tried to get it made for more than a decade, before Netflix agreed to commit a $150 million chunk of their venture capital. That allowed the director to use cutting-edge CGI to de-age De Niro, who was in his mid-70s when the film was shot, so he could play mob enforcer and Teamsters Union official Frank Sheeran at different stages of his life. The fact that it was ultimately destined to end up on Netflix, which values raw engagement time, meant that Scorsese could go as long he wanted — which turns out to be a whopping 209 minutes.

I saw The Irishman in a packed theater during its recent, one-night Indie Memphis screening at the Paradiso. It felt like a long movie, but it didn't feel like three and a half hours. Scorsese and his band of friends and collaborators haven't lost their touch. Virtually every scene is good to great in and of itself. Scorsese and his longtime ace editor Thelma Schoonmaker simply avoided having to make the hard choices of cutting stuff that works. No one will ever accuse this film of feeling chopped up.

When the story sprawls, it's always in the direction of character development. De Niro is absolutely masterful. Even though we get a good sense of Sheeran's inner life from the voiceover narration he provides as the story jumps back and forth in time, it's clear that self-awareness was never his strong suit. Looking back from his nursing home wheelchair at his life's parade of murders, assaults, and corruption, regret slowly starts to seep through his matter-of-fact recounting. That remorseful thread culminates in a wrenching memory of a phone call Sheeran never thought he would have to make.

Sheeran's perspective is narrow and naturally regressive, as you would expect from a hardened combat veteran turned mob soldier. One of Scorsese's most interesting moves is how he reveals what the women in Sheeran's life think about him, first with a subtle scene of a power struggle over his wife Irene's (Stephanie Kurtzuba) desire to smoke in mob capo Russell Bufalino's (Joe Pesci) car, then by tracing the deterioration of his relationship with his daughter Peggy, played at different ages by the fabulously expressive Lucy Gallina and Anna Paquin.

As Jimmy Hoffa, Pacino matches De Niro's brilliance. Scorsese channels the actor's late-career bombast into the labor leader's outsized persona. While Sheeran is the film's blunted emotional core, Hoffa's story represents Scorsese's bigger ambitions, tracing the pendulum swing of corruption and virtue through American society. The Irishman reminds me of The Godfather: Part II more than any of Scorsese's Cosa Nostra sagas. Its grand scope provides a sense of closure to a 40-year cycle of mob movies.