The Joys of Watching Jeopardy!

Fans of the quiz show Jeopardy! already know that there's something special happening on the venerable old program. A 35-year-old professional sports gambler from Las Vegas is shattering records during a 22 game streak that has earned him almost $1.7 million. The contestant, James Holzhauer, is on track to surpass the earnings of previous Jeopardy! phenom, Ken Jennings, who earned $2.5 million in 74 consecutive games in 2004. As a devotee of the show, he's the best I've ever seen, and I've been watching since college. That's pre-Trebek for those with sentimental attachments to Art Fleming. What makes Holzhauer stand out from anybody else on a hot streak is his bold style. First of all, I never heard anyone even admit to being a professional sports gambler except that guy Robert De Niro played in Casino, and it ended badly for him. Holzhauer plays Jeopardy! like a poker player. "My approach isn't complicated," he explains. "Get some money, hit the Daily Doubles, bet big, and hope I run hot." So if he calmly bets $38 thousand on a single trivia question, Holzhauer says, "It's only money." Seemingly fearless, Holzhauer goes for the highest value questions first and pushes imaginary poker chips with an "all in" gesture every chance he gets. He's been correct 97 percent of the time. His aggressive betting on the show's "Final Jeopardy!" question has served him well. He's answered 21 out of 22 questions. I'm telling you, this guy is the Tiger Woods of Jeopardy! 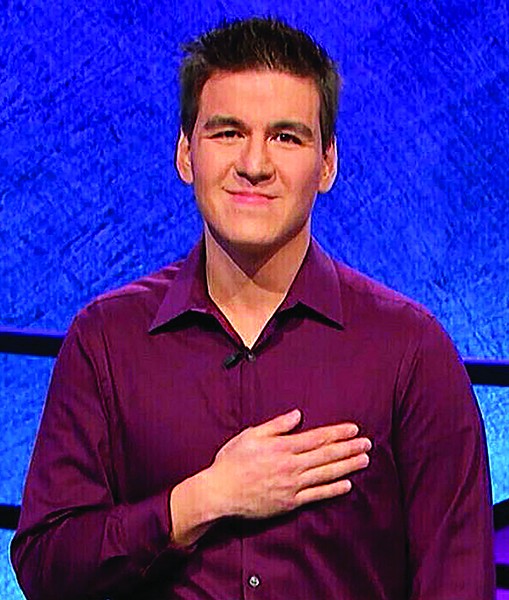 Doing my due diligent googling, I landed on a site called "The Jeopardy! Fan," which had lots of stats. Consider this: Holzhauer won $131,127 in one game, beating the previous record of $77 thousand. Out of the top-10 highest earning games in Jeopardy!'s 35 years in its current iteration, Holzhauer holds all 10. On April 17th, all 41 questions he buzzed in on were answered correctly. In Jeopardy! parlance, that's a perfect game, or as I like to call it, pitching a Sandy Koufax. After admitting to growing up watching Jeopardy! and promising his grandmother that he would be a contestant one day, Holzhauer said he likes to go to the children's section of the library to prepare. Children's books are "Chock-full of infographics, pictures, and all kind of stuff to keep the reader engaged." He has already donated a portion of his winnings to the Las Vegas Library District along with the Ronald McDonald House and the Las Vegas Natural History Museum. Holzhauer's streak has improved Jeopardy!'s ratings by 10 percent with over 10 million viewers per day, making it the third-highest viewed syndicated television program, just behind Judge Judy and Wheel of Fortune.

If I seem enthusiastic about Jeopardy!, it's because it's a family thing. When the old homestead still stood, instead of the McMansion that now stands, I would drop in on my parents to watch the show. My father was the best player among us by far. Currently, every weekday at 3:55 p.m., my 97-year-old mother can expect a call from me about Final Jeopardy! The thing that separates me from my smart family members is that I was once chosen to be a contestant. In 2003, the Jeopardy! bus came to Memphis, and their representatives set up shop in Peabody Place. Initially, you were given a 10-question quiz on a variety of subjects and out of a thousand people, about 50 scored high enough to be invited back for a 50-question quiz. Out of that group, the high scorers returned to play a mock game, buzzer and all. Although I felt anxious and nauseous going in, a surprising calm came over me when it came to playing the game. When I exited waving that golden ticket to my wife, I was euphoric. I was assured by a Jeopardy! producer that they would be calling me with a date for my appearance. Thanks to my Kudzu's pub-quiz team-member and former Jeopardy! champ, Ilene Markell, I was given reams of material to study and strengthen my weaknesses, like Shakespeare, science, math, pop culture, mythology, European history, anagrams, national parks, the Revolutionary War, British monarchs, and those darned before and after questions, among others. I was going to meet Alex Trebek. Then something happened.

On July 22nd, what the National Weather Service called the "Mid-South Derecho of 2003," but locals called Hurricane Elvis, roared through Memphis with straight-line winds surpassing 100 miles per hour, flattening trees and power lines and leaving over 300,000 MLGW customers in the dark. We tried to tough it out, but after a week of extreme heat and the constant ear-piercing din of a neighbor's faulty generator, we packed up the dogs and moved to an animal-friendly motel on Sycamore View Drive. What we thought would be a short inconvenience turned into 15 days. We were among the last households to have power restored. If Jeopardy! had called, they would have heard that "temporarily out-of-service" message.

When the call never came, I could only surmise that they phoned during the aftermath of Hurricane Elvis while we were living it up at the Day's Inn. I called the Jeopardy! office to explain but was told I had to retake the test. I said that I still knew the same stuff that I did during the audition but was instructed to either come to Los Angeles to try out or take the online test. I've been a miserable failure at the online tests. I never learned to type, which is a necessary component. For all the traumatic testing, the elation of securing an invitation, and the deflating, deafening sound of the phone not ringing, all I got was a lousy key-chain. I treasure it, though. The number of contestants that have been mowed down by James Holzhauer has softened the blow. I could have been like that character in Cheers who blows Final Jeopardy! and has to live with the shame. As for Holzhauer's streak, we'll have to wait until May 20th, after the teacher's tournament, to see if the professional gambler can surpass Ken Jennings as the greatest Jeopardy! champion ever. I'll take odds that he does it.