The Kid Who Would Be King

Late in the summer of 2017, a 7-year-old girl named Matilda Jones was swimming in Dozmary Pool in Cornwall, England, when she saw a glint of metal on the bottom. With the help of her father, she pulled a four-foot sword out of the lake. Coincidentally, Dozmary Pool was where King Arthur returned Excalibur to the Lady of the Lake.

In times past, young Matilda might have either been hailed as the new Queen of England, or promptly assassinated by minions of the actual royal family who did not care to have their divine right to rule questioned by watery tarts lobbing scimitars at peasant girls. As it was, Matilda only got her picture in the Daily Mail, accompanied by a quote from her dad. 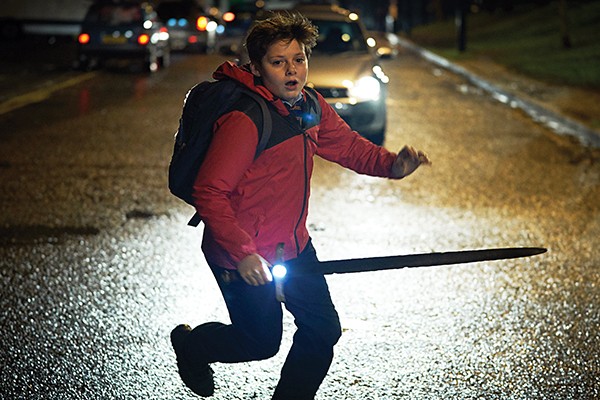 The new British/American production The Kid Who Would Be King takes the premise of Not Quite Queen Matilda to its logical conclusion. What if a kid in modern Britain found Excalibur? We're talking the real sword King Arthur wielded, not the one from Excalibur, John Boorman's 1981 retelling of Le Morte d'Arthur.

Director Joe Cornish is certainly familiar with Boorman's fever dream version of England's foundational mythology. At one point, he gleefully lifts a gag from Excalibur to show the sword's mystical powers — simply shining a green light on the sword's shiny steel surface, then cutting to the awestruck face of his hero Alex (Louis Ashbourne Serkis), who is also painted with a green spotlight. Presto! A glowing sword, without any expensive post-production work.

Aside from that cheeky reference, Cornish's purpose in making The Kid Who Would Be King is far removed from Boorman's animating spirit of "Let's all take peyote and play Knights of the Round Table!" Instead, he has taken the long knives to Arthurian legend and carved out a myth suitable for 21st-century sensibilities. Alex and his best mate Bedders (Dean Chaumoo) reside at the bottom of the social hierarchy at his stereotypically stifling English private school. The pair's primary bullies are Lance (Tom Taylor) and Kaye (Rhianna Doris). One day, Alex is chased into a construction site, where he falls and is left for dead by his pursuers. When Alex wakes up, he sees a sword stuck in a half-demolished pillar and, being a 12-year-old boy, he naturally takes it home with him.

The one thing Cornish and Boorman's movies have in common is Patrick Stewart. Boorman cast the not-yet-bald actor as Queen Guenevere's father, while Cornish puts him the role of Old Merlin, who shows up when the exposition needs a little gravitas. Young Merlin (who is actually old Merlin, because the fey wizard ages backwards) is played by Angus Imrie, channeling Nicol Williamson's psychotically eccentric performance from Excalibur. Merlin tells Alex and his "knight" Beddars that they have four days to stop the evil enchantress Morgana (Rebecca Ferguson) from using the occasion of a solar eclipse to return to Earth and do lots of bad stuff.

The Hero's Journey has proven to be a popular and malleable template for films since George Lucas applied its refined form to Star Wars. But the Hero's Journey in general and Arthurian legend in particular can be problematic in its emphasis in holy bloodlines and "chosen one" mythology. Cornish, who deconstructed alien invasion tropes while launching John Boyega's career in his debut film Attack the Block, sets out to do the same thing to King Arthur that Rian Johnson did for Star Wars in The Last Jedi: identify and magnify the good parts of the Hero's Journey while leaving the regressive elements behind. Cornish doesn't have Johnson's budget or sweeping vision, but he manages to make the story palatable for post-Potter tastes. Serkis' performance as a nerdy kid called to kinghood reaches its apex when he recruits Lance and Kaye to his cause, pointing out that Arthur conquered not by force, but by converting his enemies into friends.

Cornish has devoted his subtext to speaking to the fears and animosities of Brexit Britain. The text is inoffensive, all-ages fun that defaults to the lightweight and pulls punches, lest it scare the kiddies too badly. (Say what you will about Harry Potter's shortcomings, at least characters died and the stakes felt real.) But did the world really need another blowhard Arthur and a Round Table of gritty, humorless fanatics? The Kid Who Would Be King's good-natured positivity seems much more appropriate to the moment.