The Latest on Parking, Permits, and Sidewalks

An update on stories we began covering in 2014.

Here's an update on some of the stories that we began covering in 2014 and will continue to follow in the New Year.

• Overflow parking for the Memphis Zoo will continue on the Greensward at Overton Park for a period that could stretch until 2019.

Memphis Mayor A C Wharton said while his "clear preference" was not to use the space for parking, the experience of this past summer made it clear to him that the Greensward "will be an important relief for zoo parking until such time as a viable alternative is realized."

The news came in a letter from Wharton to Tina Sullivan, Overton Park Conservancy executive director, on Wednesday, December 31st. The sentiment is a complete departure from a Wharton letter in May that said the city was committed to eliminating Greensward parking by the end of 2014.

"We were very surprised and disappointed to receive this letter from the city a few hours ago," read a Facebook post from Get Off Our Lawn, a group organized to fight Greensward parking. "The fight for a car-free Greensward continues."

Going forward, Wharton wants zoo and park stakeholders to work together to develop a viable plan for parking that does not include the Greensward.

He called Overton Park a "great treasure" and called the zoo a "tremendous asset." Wharton wrote, "The city will allow parking on the Greensward, as may be absolutely essential to zoo operations, until a plan is implemented, [or] Jan. 1, 2019, whichever comes first." 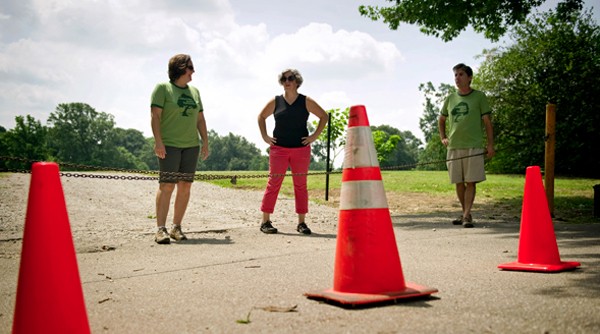 • Special parking permits will be issued to some residents who live around the Overton Square entertainment district but not as many as originally thought.

The move to start a special parking permit program there surfaced in April. Residents complained to Memphis City Council Chairman Jim Strickland that Overton Square visitors were blocking their driveways and alleys with their cars and sometimes even parking in their yards.

The program was approved by the council in August. Petitions were sent to neighbors in the proposed new parking district, an area bound by Cox Street on the east, Morrison Street on the west, Union Avenue on the south, and Jefferson Avenue on the north. A section of Lee Place North was also included.

If at least 75 percents of residents on the individual streets approve permit parking for their street, they would be placed in the special parking district and permits would be issued to them.

In all, only 10 permits will be issued to residents on a section of Monroe Avenue between Cooper and Cox. The council approved those permits on an unannounced agenda item during its last meeting of 2014.

"Basically, [Restaurant] Iris agreed to pay for half of the first-year of permits for 10 permitees who live on the street," said councilmember Kemp Conrad. "The neighbors ... and Iris have agreed to basically split the north side of Monroe in the middle of the street."

• The moratorium on forcing residents to fix their sidewalks was extended in late December.

City officials began enforcing a long-standing rule last year to make homeowners either fix their sidewalks or be hauled into Environmental Court.

The council approved its latest moratorium to last either six months or until the Wharton administration officials could propose a viable alternative. City engineer John Cameron said he and his office are working on the project and should present an alternative to the council in the first two months of 2015.