The Liquor Store: dog-friendly and Instagram-worthy.

Gather your friends and rescue dogs, check your three-drink weekday maximum at the door, and rejoice! It's patio season in Memphis!

This is the time of year where Memphians can get away with double-digit amounts of draft beers on a Tuesday just because it's 70 degrees outside. They can justify sugary drinks and cheese fries because calories don't count when consumed outside. In the spirit of the looming patio season, I opted for an outside drinking experience. That is to say, I stepped outside my comfort zone of "dark and smoky" and into the patio zone of "light and airy." I went to The Liquor Store's brand-new patio, a patio I felt I could use to ease into the season because "liquor" is in the name of the place.

The Liquor Store has been open just a few months, so they missed out on patio season last year. Last week, they opened their patio, nestled among the shipping containers out back of the building. The space is covered in AstroTurf and filled with bright white picnic tables and tangerine umbrellas. It's all enclosed within a cinder block wall, also painted a bright white. My friend and I decided it looked like an outdoor space in a Pee-Wee Herman movie, so we've nicknamed it Pee-Wee's Playhouse Patio. The shipping containers may soon house an outdoor bar, and, if you're lucky, Paul Reubens on a bicycle. 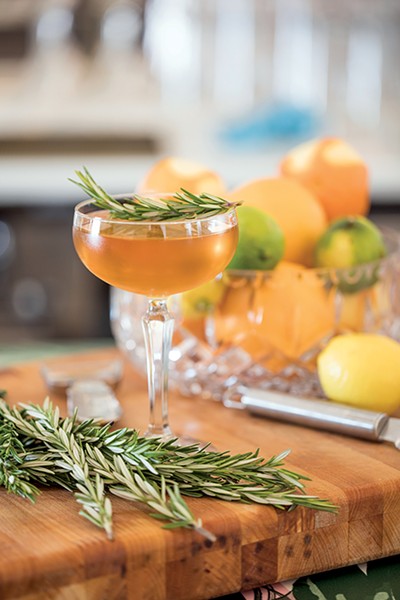 The success of a Memphis patio can be difficult to predict. A patio that I don't think will make it is suddenly booming, whereas some of the great patios in this city remain underappreciated and underutilized. The Liquor Store's patio has a lot of what people like: colors that look great in Instagram photos, dog-friendliness, and unique drinks made with a liqueur no one at the table can pronounce. Not only did I take a picture and pet a dog, but I also indulged in the patio-worthy drinks on the menu. There's the Fortified Broad with Rhum Barbancourt, orgeat, white port, and cinnamon, which was as good as a rum cocktail gets if you're not much of a rum drinker. I also drank an Earl Grey Sour, made with brandy and egg whites. We ordered mojitos, too, because it just felt right on a breezy, spring night. They weren't listed as a specialty drink, but they were delicious without being too sweet. Not to be outdone by liquor, there's a strong showing on the menu from local beers and, for the less fancy, 40 oz. High Life. The allure of drinking 40's on an AstroTurf patio off Broad Avenue may be too much for Memphis to resist; the only thing that kept me from going that route was the lack of the proper soundtrack.

While a great patio must have great ambience, food plays into the equation as well. The Liquor Store serves breakfast all day, and anyone who has ever found themselves falling into a CK's at 4 a.m. knows what a beautiful tango exists between booze and breakfast entrees. We ordered the steak and eggs, the former deliciously cooked and knocking the socks off the steak that five shots of Jameson deem passable at a 24-hour diner. The steak and eggs was also served with a large pancake, which we didn't know, so its presence was like finding a bonus tater tot in an order of french fries. The Liquor Store: making your 9 p.m. patio breakfast dreams come true since 2018. Lunch and dinner are offered as well, and here's a second gentle reminder that cheese fries' calories don't count when you eat them outside.

I'm glad I began patio season at the Liquor Store. It was full of people and puppies at sunset mid-week: a good omen in my book. The summery feel of the place and cold rum drinks have me yearning for all the other Memphis patio power-players to get into the swing of it. In Memphis, our patio season can be fleeting as the weather goes from cold rain to sweltering Hades in a matter of days. It's important to take advantage of the season while it's here and to make the most of any weather opportunity that makes your 40-year old friend take his shirt off in public and order a round of breakfast shots.