The Mandalorian’s Second Season is Riding High in the Saddle

There was a lot that went wrong with The Rise of Skywalker, the final film in the Star Wars trilogy of trilogies. To begin with, the 2016 death of Carrie Fisher threw the original outline, in which she played a greater part in the endgame, out the window. Original director Colin Trevorrow was ousted after his film, The Book of Henry, flopped, and J.J. Abrams returned to helm the final installment. Abrams and writer Chris Terrio set about undoing much of the story Rian Johnson had set up for them in The Last Jedi, apparently because of some vocal fans on Reddit whose major beef seemed to be that women got too much screen time. The resulting film was a total mess that left a lot of the fanbase dissatisfied and disappointed. If their goal after the disappointing box office of Solo was to boost the returns on the final film, it didn't work. The Last Jedi made over $300 million more than The Rise of Skywalker. 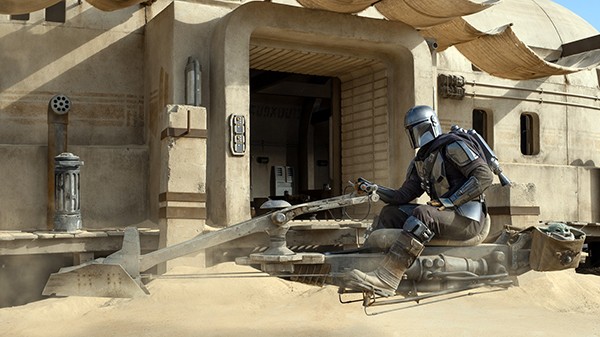 But if you really want to understand what went wrong, I can sum it up for you pretty neatly: It didn't feel like a Star Wars movie because Abrams and Terrio botched the recipe. Star Wars has its origins in the pulp science-fiction of the 1930s and 1940s. The whole reason why George Lucas came up with an original story set in a "galaxy far, far away" is because Dino De Laurentiis wouldn't sell him the rights to Flash Gordon. But a quick look at De Laurentiis' 1980 Flash Gordon reveals that Star Wars isn't purely pulp sci-fi. Lucas' greatest talent turned out to be mashing different film genres together. A New Hope took inspiration from World War II movies, Akira Kurosawa samurai sagas, and Westerns. Later, in the prequels, he would add sword-and-sandal gladiator epics and film noir to the mix, with varying degrees of success.

The Rise of Skywalker, on the other hand, tries to be a comic book movie. Terrio also wrote Batman v Superman and Justice League, both of which are as awful as they were profitable. It's understandable that the Disney brass would think this would be the right way to go, given the historic success of their Marvel franchise, but instead it soured the mix.

Ironically, it took Jon Favreau, the director of Iron Man, to right the ship with the first live-action Star Wars TV series. The Mandalorian feels like Star Wars because Favreau and company, including Clone Wars showrunner Dave Filoni, understand the formula. And it's paying off. In these tense times, the audiences are eating it up like comfort food.

The Mandalorian skews heavily toward the Westerns end of the spectrum. Put a hat and six-shooter on the masked star Din Djarin (Pedro Pascal) and the renegade space warrior becomes the Leonardo DiCaprio cowboy character from Bounty Law in Quentin Tarantino's Once Upon a Time ... in Hollywood. Pairing him with a super-cute sidekick — The Child, aka Baby Yoda — who he is sworn to protect, turned out to be a stroke of genius.

Even in the title of the first episode of the second season, "The Marshall," the Western elements couldn't be clearer. Searching for Mandalorian allies, Din returns to the familiar deserts of Tatooine and reconnects with Peli Motto (Amy Sedaris). He borrows her speeder bike to travel to the frontier mining town of Mos Pelgo, which, rumor has it, is under the protection of a man in Mandalorian armor. There, he meets Cobb Vanth (Timothy Olyphant), who is wearing some familiar armor — the heavily damaged suit of one Boba Fett, last seen rocketing into a Sarlacc pit in Return of the Jedi. Din agrees to help Cobb and the villagers kill a krayt dragon — a monster the size of a freight train — that has been terrorizing the town. In the process, Din brokers an alliance with the indigenous Sand People — just like many heroes in revisionist Westerns such as The Lone Ranger make allies of the Native Americans.

The second episode, "The Passenger," sees Din agreeing to ferry a frog-like alien to the moon Trask, where her mate will fertilize the eggs she carries in a special container. Filoni guest stars as an X-Wing pilot who sees through Din's attempts to bluff his way through a New Republic checkpoint. The mood is a little sillier — turns out Baby Yodas like to eat frog eggs — and the pace looser, but the execution remains top-notch, particularly during the harrowing climax in an ice cave full of angry spider monsters.

In the light of the growing recognition of the injustices heaped on Native Americans during the expansion of our country's frontier, Westerns don't have the same cachet with younger audiences that they did in the past. The Mandalorian repurposes what the genre did best — the lone hero, the freedom of the frontier, the challenge of creating a new moral code in a lawless land. It's exactly what we need right now.

The Mandalorian is streaming on Disney+.