Jason Statham gets ripped and fights giant sharks. Are you not entertained?

Jason Statham is all that stands between a bunch of unwitting, innocent swimmers and … The Meg.

There is a terrible screech of fingernails across a blackboard, and the room is silenced. All eyes turn to the old fisherman in the back. He waits to speak until he is sure he has everyone's attention.

"You know who I am," he says in a clipped New England accent, unchanged since the time of Melville. "You know how I earn a living."

Something about his battered blue hat and thousand-yard stare rings a bell. "You look like Quint, the old fisherman from Jaws."

"First thing you gotta do is, you gotta get a shark. Now, some people say you don't need a shark to make a movie. You get a giant octopus. Maybe a school of piranhas. Ole' Jim Cameron tried piranhas. Didn't work for him. He'll be the first to tell ya.

"But it can't just be any shark. Noooo. Bruce from Jaws, now there was a shark that understood showbiz, Chief. You gotta beat old Bruce, and Bruce was a big 'un.

"No, you're gonna need a megalodon — a 75-footer. For 20 million years, the megalodon swam the seas eating whales. Then they went extinct." 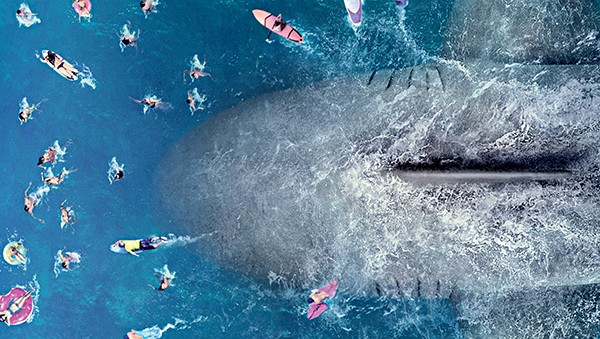 Hmmm. "They're extinct? That sounds like a problem if we need one for the movie."

"Maybe more than one, Chief. I can find 'em for you. But we're gonna need some gear, like a giant, state-of-the-art underwater laboratory with transparent tubes big enough for people, so the sharks can get a good look at 'em.

"Then we gotta give Statham a tragic backstory. Something involving sharks, Chief. For the dramatic irony. Now here's where the man who doesn't know about shark movies is going to steer you wrong. They're gonna say, we should rip off Jaws. But that's where they're wrong. You don't go with the Spielberg, you go with ole' Jim Cameron. You take a little bit from The Abyss, Chief. Statham's got this ex-wife, see. He's a crack rescue diver, but he can't keep a marriage together, because he's haunted by the men he left behind to die in crippled nuclear submarine three years ago. He's in Thailand, running a fishing boat and drinking himself to death. But he's not fat from the booze. No, he's super ripped, Chief. Muscles all a bulgin' ...

"Now his ex-wife Lori (Jessica McNamee) is trapped in a crippled submarine with a crew of landlubbers."

"Hold on. Why is she in a submarine?"

"Turns out the Mariana Trench has a false bottom, and she's down in it, exploring."

“Don’t overthink it, Chief! And that big shark, The Meg, is down there with Lori and the crew, and she’s gonna eat ’em up. So Statham has to come out of retirement to save ’em. He gets ’em out all right, but in the process, he unwittingly releases The Meg. And that’s when all the other folks come in. You gotta have a lot of ’em, ready to fall in the water at the right time so your shark can chow down. You have one who’s rich, but nobody likes. Elon Musk type. Everybody cheers when he dies. Get Rainn Wilson to play him.”

"Nuclear submarines? Giant sharks? A beach full of expendable extras? A guy from The Office? This sounds expensive."

"Oh, it's as expensive as hell itself, Chief! You're gonna need buckets and barrels and trucks full of money. That's why you need the Chinese. See, us Americans, we've got all the shark movies we can handle. But the Chinese, they don't have any shark movies. That's why you gotta go and tell 'em, 'You give us $178 million, and we'll give you a shark movie the likes of which you never seen!'"

"But this sounds like every other shark movie ever."

"They don't know from shark movies. We'll get Statham in there, barefoot, fighting The Meg with a knife in his teeth. They'll eat it up."

"Maybe the shark can live in a tornado!"

Quint shakes his head. "No. That would just be dumb."