The Memphis Express and AAF Bring Pro Football Back to Memphis

Let's give the Alliance of American Football this much: If you're launching a venture in Memphis, Tennessee, Express is a good branding technique. When the new team kicks off at Birmingham against the Iron this Sunday, Super Bowl LIII will be a distant memory. Perhaps too distant, the AAF hopes, for football-starved America. Founded by Charlie Ebersol (son of legendary TV exec, Dick Ebersol) and Bill Polian (a member of the Pro Football Hall of Fame), the new league aims to deliver in February, March, and April a slice of what fuels this country throughout the fall and early winter. So we'll ask the obvious question: Can the Memphis Express deliver?

"It is unique," notes Express head coach Mike Singletary. "Normally in a training camp, you have some idea of where a guy has played, who he is, background. We have bits and pieces, here and there, some video. Not only are we trying to find out what players can do, but who they really are. There are a lot of variables you have to put in place before you even have a foundation for how to grade a guy." 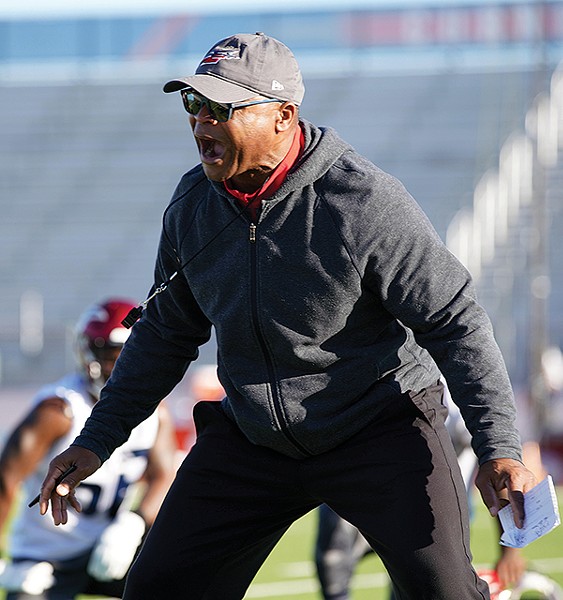 The Express will compete in the AAF's Eastern Conference with the Atlanta Legends, Birmingham Iron, and Orlando Apollos (coached by Steve Spurrier). The Western Conference features the Arizona Hotshots, Salt Lake Stallions, San Antonio Commanders, and San Diego Fleet. Following the 10-game regular season, the top two teams in each conference will make the playoffs, with the championship to be held on April 27th at Sam Boyd Stadium in Las Vegas (home of the UNLV Rebels). CBS will televise the game in prime time.

The AAF is tweaking rules to present what it feels will be a more fan-friendly brand of football. To begin with, the games will be shorter than a typical college football or NFL game, contests that often last three-and-a-half hours. The AAF play clock will be 30 seconds (10 seconds shorter than the NFL's), and there will be fewer (if any) breaks for television commercials. The reduced "stand-and-stare" time will be welcome on winter nights. (Four of the five Express games at the Liberty Bowl kick off at 7 p.m.)

There will be less "foot" in AAF football, too. With kickoffs blamed for many of the most serious gridiron injuries, teams will simply start possession at their own 25-yard line. Furthermore, teams will be required to attempt a two-point conversion following a touchdown. In perhaps the most creative alteration, a team can retain possession after scoring by converting a play of at least 10 yards from its own 35-yard line. (If onside kicks are your favorite part of football, this is not the league for you.)

While players on the Express roster may be unfamiliar to casual fans, their coach shouldn't be. As a fearsome middle linebacker for the Chicago Bears, Singletary was twice named the NFL's Defensive Player of the Year (1985 and 1988). The '85 Bears are considered by many to be the greatest defensive team ever assembled. They went 18-1, surrendered fewer than 20 points in 16 of their 19 games (a total of 10 in three playoff games), and mauled New England in Super Bowl XX. Linemen Richard Dent and Dan Hampton, like Singletary, have busts in the Pro Football Hall of Fame, but make no mistake: The man they called "Samurai Mike" — an eight-time All-Pro — was the face of that Bears defense. As a head coach, Singletary went 18-22 over parts of three seasons (2008-10) with the San Francisco 49ers.

"This is exactly where I'm supposed to be," says Singletary. "I can't tell you how gratifying it is to be in a situation like this. I get a chance to touch every part of the organization. From the ground floor, I get to impact the offense, the defense, the personnel, the coaches. Everything that's moving, I get to touch it. It's a tremendous experience. I'm doing this because I believe it's part of the journey. My goal is to be one of the greatest coaches of all time. I've got a lot of work to do. I'm really excited to be a part of this."

With a roster made up of players from regional college programs — you'll see lots of Tennessee, LSU, and Ole Miss in your game program — Singletary and his staff are assembling a team they're convinced will compete just shy of the level fans are accustomed to seeing in the NFL. Players will not, however, be paid like NFL stars. The standard contract will pay a player $250,000 over three years. One similarity to NFL deals: The contracts are not guaranteed. AAF teams will keep 52 players on the active roster. (A pair of former Memphis Tigers made the final cut for the Express: defensive lineman Latarius Brady and cornerback Jonathan Cook.)

Polian earned his Hall of Fame bust by building Super Bowl teams with the Buffalo Bills and Indianapolis Colts. It was a conversation Singletary had with Polian that convinced the 60-year-old coach the AAF is not merely a bridge, but a destination. "Bill said this is not a minor league," says Singletary. "This is not a step down from the NFL. This is a pro football team. If he had said this was a minor league, I probably wouldn't have done it. For me, that's the way I look at it. I'm not building a team that's gonna be a sub-NFL team. I'm trying to put a team together with my staff that could compete with NFL teams. And win. We obviously have a ways to go, but that's what I envision every day. How do I get this team to where it's worth rooting for, a team to have pride in?"

Who will quarterback the Express when they take the field in Birmingham? Three will be in uniform: Zach Mettenberger (LSU), Christian Hackenberg (Penn State), and Brandon Silvers (Troy). Mettenberger started 10 games for the Tennessee Titans in 2014 and '15 (and lost all 10). Hackenberg spent two months last fall on the Cincinnati Bengals' practice squad. If this team develops a star quarterback, it will be a Memphis star.

"There's a lot of talent here," says Singletary. "I'm thankful to have coaches that can coach to the least common denominator and try to find out where the lowest person in the room may be, who may be very talented but very raw. We can teach, train, and build up. There's a reason why [these players] are here.

"Given the amount of time we've had," adds Singletary, "they've made tremendous strides. You look at major college football or the NFL, some of those guys have gone through great programs, and some just have great ability. These players have a mixture. 'I was on my way then, boom, blew out a leg.' 'I was on my way and, boom, I made a stupid decision.' 'I was on my way and they kept 52. I was the 53rd.' For me, the biggest thing is to help them understand that this is not going to be a team of almost-made-its. You're gonna have to make it. That's the mentality we're trying to build, and not just on the field."

Singletary is reluctant to describe the offense he envisions for this year's team until he actually sees his players in game action. Which means the opener this weekend could be, in his words, "ugly."

How does a man so closely identified with the '85 Bears build a defense, knowing the standard he reached as a player is impossible? "I'm looking at what we're going to do in 2019," emphasizes Singletary. "I'm looking at the standard we're trying to set for this league. How we'll play defense. The one thing I know: We'll play fast. And we'll play every down. We're gonna bite you."

However talented the Express may be, they'll take the field having seen absolutely zero film on their opponent, the Iron being every bit as brand-new. This has placed a premium on simplicity. "We can run our defensive coverages against anything," notes Singletary. "If they come out with five receivers, empty backfield, quarterback on the side of the field . . . it doesn't matter. If we can get through the first game . . . let's get out there and start somewhere. We'll know we can play against this or that, whatever [the opponent] puts on the field. Then we can go to film and study, look at personnel. But the first game . . . it's gonna get ugly."

All Express games will be broadcast live on 101.9 KISS-FM. Greg Gaston will handle play-by-play, with analysis from former Memphis Tiger Russell Copeland.

* To be televised live on the NFL Network.