Every year or so, Seth Rogen gets the mutated remains of the Freaks and Geeks crew together to make a big, dumb movie. Sometimes, as in the case of 2013's This Is the End, these larks are among the most free and most fun comedies of the 21st century. Sometimes, as in the case of last year's The Interview, they cause an international incident and bring a major Hollywood studio to its knees.

The Night Before is unlikely to be as effective at turning another page in our unfolding William Gibson-cyperpunk-dystopia of a reality as The Interview, but it's actually a much better movie. Where The Interview was a reworking of the mostly forgotten Chevy Chase/Dan Akroyd vehicle Spies Like Us, The Night Before is a mashup of After Hours and It's a Wonderful Life. The angel, in this case, is a supernatural weed dealer named Mr. Green played by General Zod himself, Michael Shannon, who appears to be trying to imitate Steven Wright. It's one of those great bit parts that can make or break a movie like this, and, unlike Neighbors, Rogen's massively overrated summer comedy that is inexplicably getting a sequel, The Night Before makes them count. 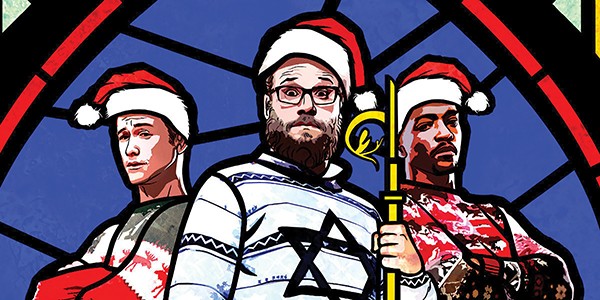 Joseph Gordon-Levitt plays Ethan, whose parents died 14 years ago just as the Christmas season was getting underway. His two best friends, Isaac (Rogen) and Chris (Anthony Mackie), took him out to party on Christmas Eve to keep him from feeling lonely, and a tradition was born. But these days, the boys don't get out much any more. Isaac is a successful lawyer with a baby on the way, and Chris plays in the NFL, so this is going to be the last year of the traditional debauch. Ethan's life never took off, and he's working as an event server dressed as an elf. When he's demoted to coat check, he gets the opportunity he's been waiting years for. He swipes invitations to the Nutcracker Ball, a massive, secret party that is the hottest holiday ticket in New York. Meanwhile, Isaac's wife, Betsy (Jillian Bell) gives him an early Christmas gift: a box of assorted drugs so he can put the tradition to bed in high style.

Naturally, the three friends' trip to the party weaves an intertwining tapestry of social disasters. Rogen gets the best scene with a psychedelic paranoid crisis in a bar bathroom, but Gordon-Levitt gets plenty of mileage using his prodigious acting gifts to mug for the camera. Mackie comes off as a little stiff next to comedy vets like Lizzy Caplan, who plays Ethan's love interest, and Mindy Kaling, the subject of an epic cell phone mix-up, but he's an agreeable screen presence.

The Night Before is a 21st-century studio product, full of product placement, Save the Cat screenwriting beats, and Miley Cyrus cameos. Strangely enough, that studio is Sony, whose post-hacking survival I publicly doubted. Sony survived, even though many, including the studio's chief executive, lost their jobs. But somehow, Rogen and James Franco, who has a cameo in The Night Before, are still making pleasantly stupid studio comedies. I hope somewhere, an angel got his wings for that one.