Rendering of the Patriot Lake expansion

Jen Andrews, director of development and communications for the Shelby Farms Conservancy, wants people to see the 4,500-acre park the way she sees it, but she can't always make that happen. Even though her descriptions are lively, and recent additions such as a 100-acre dog park and the extraordinary Woodland Discovery Playground should help to establish the park's new groove, helping people get the picture isn't always an easy job.

"I really like the ad agency I'm working with now," Andrews says, prefacing a story about some marketing materials that missed the point completely. "They made us look very Yosemite and Smokey the Bear," she says, amused. "I said, 'Guys, that's not what this is about. This [Heart of the Park enhancement] is an opportunity people won't understand the value of until I'm dead and gone. This is Central Park 100 years ago."

Even after the rousing pep talk, the agency still had a hard time imagining Central Park on Walnut Grove Road.

"I know it is hard for people to imagine us as Central Park," Andrews concedes. "What we're doing here is a hard thing. It is not the easy thing."

Right now, there are bulldozers rolling all over Shelby Farms, tearing through the landscape. They moved more than 35,000 cubic yards of soil over Memorial Day Weekend alone. As strange as it might sound to those who think of large earth moving vehicles as a park's natural enemy, this time around, it's all good. Shelby Farms is breaking ground on its Heart of the Park expansion, a $70 million project that will expand Patriot Lake from 52 acres to 85 acres, creating organic economic drivers like boat and facility rentals to grow the Conservancy's earned revenue opportunities and fund the ongoing restoration of the park's ecosystems.

Although park enhancements were inspired in part by community feedback and the economic opportunities that can be created by water attractions, even the Patriot Lake expansion is part of the healing process. Originally created when the county needed dirt to cap a landfill, the lake is relatively sterile, with a uniform depth of about eight feet. It's not able to handle healthy fish populations, and the current watershed isn't enough to sustain water levels without drawing from the aquifer.

"The long-term business plan is all about healing park ecosystems that are damaged — like the wolf river bottom and the pine forest," Andrews says.

Shelby Farms is a public park and still receives $575,000 annually from Shelby County, which is the amount the county had been spending for mowing and maintenance before the Conservancy took over operations. The park's current budget is $2.5 million, including a little more than $1 million in contributed revenue, and a little less than $1 million from earned revenue. Since 2008, the Conservancy has raised $63 million for major enhancements around Patriot Lake and the central portion of the park, leaving the rest of the landscape virtually untouched. All resultant park improvements become county property.

The master plan, created by James Corner Field Operations, improves, protects, and enhances existing natural resources while creating an activity hub at the park's core. A new visitor's center will include education space, a cafe, a gift shop, and a huge front porch. A new boat rental kiosk will allow patrons to rent canoes, kayaks and paddle boats. The park's largest economic enhancement will be a rustic retreat center just off the east shore of Patriot Lake, with a signature "farm-to-table" restaurant. Enhancements to the lake itself will include a cypress forest along the south shore, a new water play area, and an enhanced Wetland Walk that doubles as an environmental classroom.

"We always knew we wanted to keep the Woodland Discovery Playground free," Andrews says of one of the Conservancy's first completed projects. "But there were probably opportunities [to design it] for people to buy a sandwich or a bottle of water. Unfortunately, we didn't design it with that in mind." Having learned from past mistakes, the Conservancy decided to take its new plans through rigorous workshops, reviewing everything from traffic flow to lake bottom ecology to wedding planning and catering needs. "It was exhausting but incredibly valuable," Andrews says. 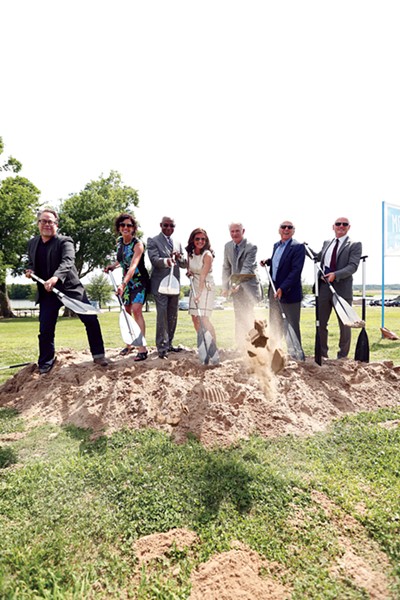 While conducting a tour of the construction zone, manager Kim Elloriaga coos and pulls her electric cart as close to the edge of Patriot Lake as she can get. "Look at the goslings," she says, pointing to a mother goose and a clutch of little ones. "Look at the babies." She's a landscape architect from San Antonio, Texas, as outdoorsy as they come, but she's never seen baby geese before and is riveted.

Elloriaga, who decided she wanted to be a landscape architect when she was 14 years old, continues her tour around Patriot Lake, pointing out features that still only exist on the drawing board. She explains how the berms between the park and Walnut Grove will soon be raised an additional 12 feet and planted with trees, making traffic invisible and reducing road noise. She explains how new pedestrian trails will take park visitors right to the water's edge and across boardwalks that will extend through wetland plantings that help filter groundwater.

All new plantings will be indigenous. Nothing goes in the ground for strictly ornamental purposes.

"It's important as a landscape architect to understand the nuances and the intent of the design, and to maintain the user landscape experience in the way the designer intended," Elloriaga explains.

"Who could have even imagined such a place?" she asks, zipping past the yet-to-be-built event pavillion.

Who could have imagined such a place, indeed. Certainly not the designers who initially submitted proposals for the park's development plan.

"We regularly got calls from people who thought there must have been a typo and that the park was only 450 acres, which would still be really big," Andrews says, pulling things into perspective.

Shelby Farms' park rangers have expansive job descriptions. Aside from the regular day-to-day grind of mowing, maintaining shelters, and making sure trash is picked up, they also contribute to park enrichment, each according to their unique talents. Those skill sets have been tapped and tested by park expansion, especially as Shelby Farms' bison population was moved from its previous range into an area that is both a better habitat for the animals and one that will bring them closer to pedestrians using the Chickasaw trail.

At feeding time, ranger Kelly Evans steps back for a better look at the new circular Bison corral he designed for the park. It's the new corral's first day in use, and he hopes everything works the way it's supposed to. Evans, an artist who also built props and painted murals for Shelby Farm's Spooky Nights event in October, earned a BFA in design from the University of Memphis. "I knew within a month of being here at Shelby Farms that this was a place where I wanted to spend a long time working," Evans says. "Now, no matter how long I'm here, when I go by this portion of the park, I'll think, 'I did that.'"

"Don't make fun of my Bison call," says ranger Ben Holden, as he drives deeper into the park, bellowing into a microphone. Before long, the Bison, who range in size from a 1,000-pound dominant male to a year-old runt named Stormy, begin to make their way into the new feeding pen.

American Bison may look like big lumbering animals, but they can run 40 miles an hour, outmaneuver a horse, and clear six feet with a jump. The old fences along Farm Road were really more of a suggestion than an actual deterrent. The new ones are much taller, and they can stop a truck.

"They're fascinating animals," says Holden, who prepares the Bison's daily allotment of sweet feed, which is soaked in apple cider vinegar to make the animals' bodies more alkaline and coated in a powder that eradicates parasites using a mechanical process rather than chemicals, so the animals can never build up a tolerance. In the past, feeding time often brought traffic to a halt along Farm Road, but new plans will allow for a better user experience.

"We're going to eventually put in bleachers," Evans says. "I think it will draw an even bigger crowd than before, because people won't be putting themselves in danger [by] stopping their cars in the middle of the road. People can sit comfortably and get talked to by the ranger who's feeding the buffalo."

Visitors may eventually have proximate access to other large mammals. Park rangers are working with an East Tennessee group that's reintroducing elk to Tennessee, where they were native through the 19th century, before habitat was destroyed and they were hunted out. If plans work out, Shelby Farms would be considered as a breeding and research site.

Cheryl Goudie, a scientist who helped create Shelby Farms' natural resource management plan, knows some daily users who just want to go for a run won't understand when some parts of the park are left to go fallow. It's being done to attract the kinds of rodents and bugs that will, in turn, attract the birds that attract ecotourists. "But that's natural," she says.

Goudie says it's easy to look at Shelby Farms and assume it's a natural environment. "But it's not," she says, explaining how the sprawling urban green space was originally deforested for farm use and impacted by the agricultural practices of a prison farm system and modern thoroughfares. A damaged pine forest on the north side of the park above Pine Lake was planted for harvest around the early 20th century but was never harvested. All of the park's lakes are man-made and problems have arisen as a result of various dysfunctions.

"Patriot lake is a terribly damaged lake," Andrews says. "Now this large-scale urban lake is the centerpiece of the best thing that we'll ever do for the park."

Size is one reason why some may have trouble thinking of Shelby Farms as Memphis' Central Park. At 4,500 acres, you could fit 20 Central Parks inside Shelby Farms' borders.

Shelby Farms Executive Director Laura Adams says size is just a part of the equation. "We can do things other parks can't," she says. "Like big water, a 100-acre dog park, 55 miles worth of pedestrian trails, horse trails, and on and on. Other cities would salivate to have all of this. We're thinking big and bringing out its full potential.