From sweet to savory and back again.

It started as a joke, but then it became a challenge: Is it possible to make a traditionally sweet dish savory — and vice versa — and actually want to eat the results?

Whatever my misgivings (I'm a dessert girl all the way), I soon began daydreaming about switching up flavors and textures in order to create something unexpected. What follows are the experiments, cooked up by my husband and me, in the sweet-to-savory and savory-to-sweet arena that sometimes work even better than their original incarnations.

Bread pudding, for example, is one of my favorite desserts. If we can veer from the typical vanilla and rum bread pudding into pumpkin, chocolate, or pineapple, why not bake a savory version as a main dish? Substituting salted capers and roasted grape tomatoes for the burst of flavor raisins usually provide, we kept just about everything else the same as in our go-to bread pudding recipe except for the sugar.

Another savory bread pudding attempt, this time with oyster mushrooms and Gruyère, was passable but called for a little more sweetness and balance in order to work.

I will admit that I was leery of what came next: savory cheesecake. My husband assured me that breadcrumbs could replace graham crackers for the crust and that goat cheese and whole-milk ricotta would complement the caramelized shallots and fresh rosemary. Instead of fruit, this cheesecake also sported a few varieties of marinated olives for its topping.

I wouldn't say the finished product rivaled a sweet cherry cheesecake, but it would be interesting enough to take to a party if one didn't have much else to talk about, because everyone persuaded to try the dish had a strong opinion about it. 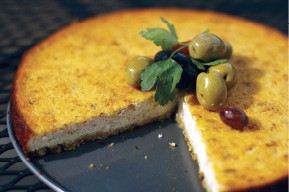 For our first savory-to-sweet creation, I had a starting point. Recently, I tried the Dutch cocoa tortilla chips made by the company Food Should Taste Good, and alone they were too strange to make any good sense. But such an unusual ingredient begged to be properly appreciated, so I began wondering about how these chocolaty, lightly sea-salted and cane-sugared chips would function as part of a dessert. Suddenly, it hit me: Why not pair them with strawberry salsa? So we diced strawberries and a kiwi and added a squeeze of Meyer lemon and some agave nectar. Adding agave and a pinch of cayenne to Greek yogurt simulated sour cream with a sweet, spicy edge to it. My brain relayed the chips-and-salsa message but tasting dark cocoa, berries, and cream really threw the circuits between my mind and taste buds for a loop.

Another fun discovery was dessert ravioli. Thumbing through our cookbooks for more ideas, we spotted a recipe for dessert ravioli in Charlie Trotter's Vegetables. He uses loquat in a vanilla bean and fig sauce with gooseberries. Instantly, we were intimidated but still intrigued.

Our take on this lofty recipe was chocolate-banana ravioli in a fig-cocoa sauce. Using wonton wrappers as our pasta, we stuffed them with a mixture of mashed banana, raw sugar, and grated dark chocolate. Warmed Ficoco jam and butter served as the sauce. These were in demand. Something about the balance of the sharp, sweet-tart taste of figs, the supple pasta wontons, the lush chocolate, and the comwforting bananas made this dish the most natural, workable transformation yet.

Journeying from sweet to savory and back again reminded us of the "miracle fruit" that was all over the news last year. The story goes, that this exotic berry, Synsepalum dulcificum, makes everything — even lemon slices! — taste sweet beyond belief. We had the same sort of mind-bending experience, albeit in a more accessible and mainstream way. It made me relish the time spent experimenting with flavor, texture, and most of all, our expectations.