This began about a year ago. One of her customers who works at Kroger, said, "Your pies are so good, I'm going to have somebody from Kroger reach out to you," Anderson says. 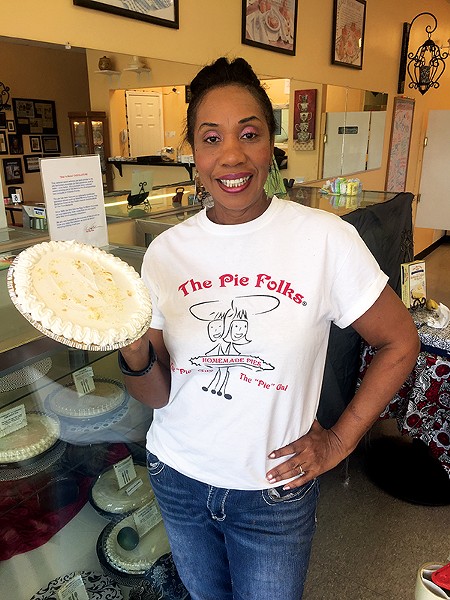 Someone from the regional corporate office then came by and said, "I don't eat that much sweets." He took an "itty bitty bite" and said, "Your pies are really good."

Anderson then met with other people from the regional corporate office, who told her they wanted to go with the banana cream pie.

"I had to get a chemist to formulate the flavor. They formed my recipe into a dry mix. I don't know how they did it, but they did it. You give them your recipe, and they do their magic on it."

It took a few times for the chemists to come up with the exact taste, Anderson says. They would send the mix to her overnight by FedEx in Ziploc bags. "It took probably 10 times to get it like mine. Sometimes it was too sweet. Sometimes not sweet enough. They needed to bring up the banana flavor in it sometimes. Things like that. We got the perfect one."

The pie "had to taste exactly like the one I was making," she says.

You don't bake it, Anderson says. "It has to set up. When you make it, it's not going to be totally liquid, but kind of soft. It's got a six-hour set-up time so it will be firm enough for you to be able to slice it."

Anderson didn't think the banana cream would be the first of her pies to be made into a mix. "I thought the chocolate pie would be my golden child. I really thought that would be the one. You never know how things will happen."

Born in Tunica, Anderson only made "sweets" — cookies and candy — at home. "My mother had 12 kids. None of the kids ever cooked. My mom did all the cooking. Whenever she had a baby, my daddy did the cooking."

Anderson made her first pie after she was married; she made her mother's pumpkin pie from memory. "My mother never wrote out a recipe," she says.

Anderson opened her first bakery, The Poconut Pie Factory, in 1997 in the Eastgate Shopping Center. It was named after the coconut sweet potato pie, which was the bakery's signature pie. Anderson's Slap Yo Mama Chocolate Pie later became her signature pie. The bakery moved to Olive Branch, where it was re-named The Pie Folks, then to Germantown and, finally, to Cordova.

Anderson serves 19 of her 27 flavors of pies each day at The Pie Folks & Bistro. The pies are available by slice, half, and whole. She also bakes cupcakes and serves lunch.

She is planning more pie mixes. "The next one is going to be my apple and my peach pie. I'm going to make it to where you can use apple pie filling from the can. And put a recipe on there if you want to do fresh apples."

Anderson currently uses her pie mix to make her banana cream pies at the bakery. "It's my mix. It saves me time. It takes me 30 minutes to make a pie, to do everything. Now I can make it in five minutes."