"Mise en Place" — "Everything in its place" — is tattooed on Erica Bone's forearm.

"It's how an entire restaurant is supposed to be run," says Bone, 25, executive chef of The Pocket, the new exclusive cocktail lounge/restaurant.

Unfortunately, Bone didn't heed that advice at a previous restaurant job, and that almost changed the direction of her career.

She was sauté chef at Spindini when she decided to take a shortcut in the kitchen. She clocked in, checked the reservation book. "This was a Wednesday night, and we had two people on the book. So one two-top. That was all we had.

"I just decided 'I'm not prepping anything.' I just got bare minimum things heated up. I was hungover, and I didn't feel like working, didn't want to be there. Rather be at home.

"The next thing I know, 100 people were in there. It was an Orpheum Theatre night, so it was 100 people who had to get in and leave really fast."

Joe Cartwright, who was executive chef, walked in. "He bailed me out. And then I got an ass-chewing you wouldn't believe.

But, she says, Cartwright said, "Don't apologize to me. I fully expect you to apologize to everyone else because the fact that you couldn't get their food out probably affected their tips. You ruined the kitchen and the front. You messed up the kitchen in the back, and you caused those people anguish while they're trying to make money because you decided you were coming in today and not working."

Cartwright didn't fire her, but he bumped her down to salad maker. 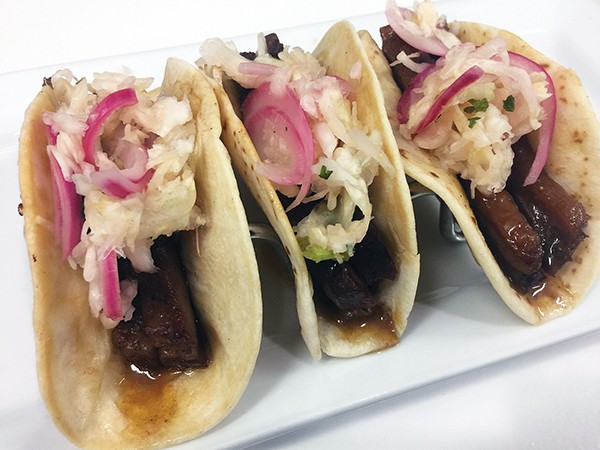 Bone told her girlfriend she was going to quit, but her girlfriend said, "No, I think you should stay. Joe is an important person. He's a sauté legend in the city. And if you do that to him, that's not a good start for your career. You deserved that. You can either learn from that, or you can continue to make that same mistake over and over again instead of proving that you are better than what you did tonight."

Bone went back to work in salads.

Then came another "Orpheum night." Bone said, "This is not happening again."

"I worked the dough station behind me, dessert, and salad, and worked fry, grill, and helped with pasta that night."

Later that night, Cartwright pulled her aside and said, "That right there is awesome. And if you continue to do that, that's what's going to make you fucking good at this. All right?'"

When Cartwright left Spindini, Bone left and for the old Farmer restaurant.

Bone then went to culinary school at Auguste Escoffier in Boulder, Colorado. "It opened up a lot of doors for me. It made me think that chefs can be more than just in the kitchen. They can be the types of people that bring a community together."

She returned to Memphis and eventually went to work for chef/owner Michael Patrick at Rizzo's Diner. "He helped me refine a lot of things I already knew but just needed the extra practice in."

Patrick told her about the job at The Pocket. He said she'd be perfect. She'd have enough money to be comfortable and she'd have her own "creative expression."

She admires The Pocket general manager Charles Monger, whom she described as "a perfect professional."

Describing her menu, which is slated to be introduced in December, Bone says, "Seasonality. I believe in celebrating the seasons."

A root vegetable gratin is one of her dishes. "It's going to have turnips and parsnips and basically root vegetables that can be well celebrated into the end of winter."

Bone is building her farmer network. "I have a goal that by this time next year, the majority of my produce and protein will be coming in from local farmers."

Another goal? "My idea of excitement is to walk away feeling satisfied, 'I got all the textures in there. I got all the different mouth feels.' I want a whole thing. I want the whole experience."