The Grammys (or the Grannys): In which Paul McCartney, Madonna, Kanye West, and Tony Bennett ride the “Highway to Hell.” 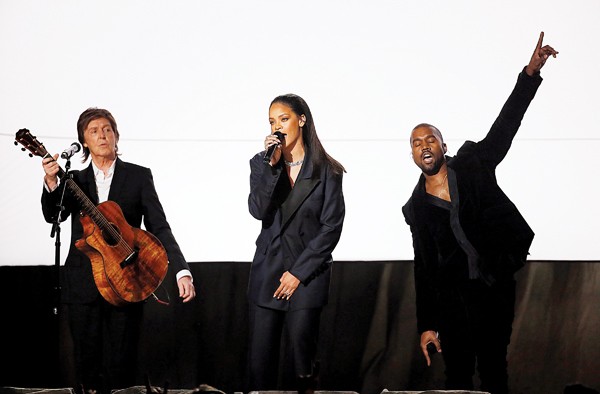 How fortunate am I that the Grammy Awards should occur on the same night that I write this column? My original opening sentence was going to be, "For the love of everything that's holy, vaccinate your damn kids," but the musical-industrial complex's annual circle-jerk is just too outrageous to go uncommented upon.

Before we enter snarkville, let me tell you what was good about the show. Catering to the aging demographic, the former headbangers AC/DC played their hit song, "Highway to Hell." Only, it was a hit in 1979, before two-thirds of the audience was born, and it was revealed that the ancient mariners needed a teleprompter, upon which appeared the lyrics to their own song, just in case those tri-focals failed. Lady Gaga and Tony Bennett continued their May/December smoochy lounge act, singing Irving Berlin's, "Cheek to Cheek." But here's a secret: The 88-year-old Bennett can't sing anymore and she's been carrying him for awhile. At least she didn't wear meat this year. Beyoncé was divine. Pharrell Williams was terrific. Usher was great. And I was happy to see Beck win Album of the Year, although Twitter erupted with queries of, "Who is this guy Beck?" Which is a shame since I still consider him one of the newer artists.

Annie Lennox was all class singing the old Screamin' Jay Hawkins' song, "I Put a Spell on You," in direct contrast to Madonna, who refuses to age gracefully or perform an age-appropriate song. I get it: She's a gym rat who's in good shape for her age, and she has great legs. Still, they're attached to a 56-year-old ass, and her sex-kitten routine, surrounded by back-up dancers wearing demon's horns, has lasted well past its shelf life. The 60-year-old Lennox, in black slacks, sequined top, and minimal makeup, looked beautiful by comparison and didn't need auto-tune either. I love Pharrell, who won Best Pop Solo Performance for "Happy," only he was dressed in a bell-hop outfit reminiscent of The Grand Budapest Hotel. That funny doorman's outfit will probably be this year's Smokey the Bear hat. Emotional tenor Sam Smith, who won Best New Artist, Song of the Year, and Record of the Year for his smash hit, "Stay With Me," neglected to thank Tom Petty, for whom he recently gave a songwriter's credit and paid an undisclosed, out-of-court settlement for cribbing the chorus to Petty's "I Won't Back Down."

The most egregious pairing of the night, and possibly of all time, was the trio of Kanye West, Rihanna, and Sir Paul McCartney singing a nondescript song called "FourFiveSeconds," just released as Rihanna's new single. Sir Paul has all the money and fame in the world. For the life of me, I can't understand why he would enter into this unholy alliance. Didn't he learn anything from that heinous duet he did with Michael Jackson? Or is he that desperate to remain relevant? Basically, McCartney was reduced to playing back-up guitar and singing inaudible low harmony while Rihanna warbled and Kanye chirped through auto-tune to cover up the fact that he can't sing. McCartney was among the nine songwriters on this mess, but he was content standing there like a twit and never even sang a verse. I had to shout out loud, "Do you remember who his partners used to be?"

That faint music you hear is John Lennon, somewhere from the great beyond, singing another chorus of his "How Do You Sleep at Night." And speaking of songwriters, the winner of the Best R&B Song, Beyoncé's "Drunk in Love," credited eight writers. Since when did songs begin getting written by committee? It only took one person to write "A Case of You."

It was keenly disappointing to see that the "In Memoriam" segment, while mentioning music lawyers and agents, omitted the names of artists and legends beloved to Memphians whom we lost this year: Jimi Jamison, John Fry, Mabon "Teenie" Hodges, Jack Holder, John Hampton, and "Cowboy" Jack Clement, the legendary producer who began his career with Sam Phillips at Sun Records. I understand the names were printed in a longer read-out on the Grammy site, but each of these artists deserved an on-air remembrance.

The program's closing segment, a tribute to the movie, Selma, featuring Beyoncé, John Legend, and Common, was transcendent. I've heard Legend sing many times, but I believe this was his finest performance. There's a lot of great music out there; it's just not what the near-extinct, corporate labels want you to hear. Personally, I enjoy watching the old, thieving, grimy music "industry" implode. It deserves to. All told, the 2015 Grammys were merely tepid, but it might have been worse. They could have let Dave Grohl play.