The do-nothing GOP-led Congress is the most unproductive and despised such body in American history. 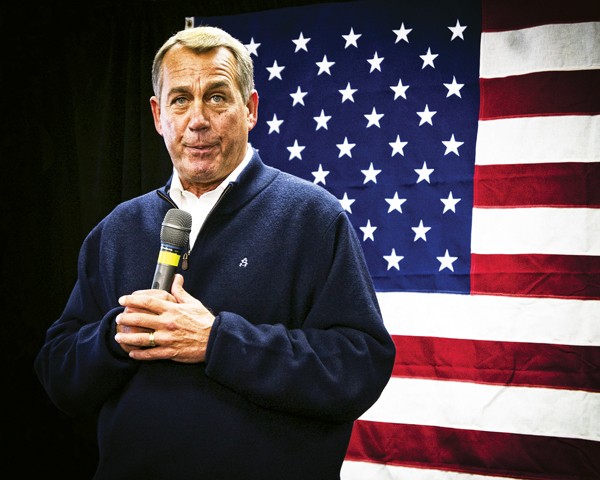 So now they expect you to reward them. The most unproductive, polarized, ineffective, and despised Congress in American history has abandoned the nation's business in order to focus on convincing you that they are worthy of your support for reelection. After a five-week summer recess and a grueling eight days back in session, the congressional Republicans just said, "Fuck it," and lit out for the territories, leaving trivial matters such as war and peace to wait until after the mid-term elections.

Indulge me in a hypothesis: Let's say that you are the personnel manager of a large hospital, and right in the middle of a measles outbreak, all your employees decided to return home to prepare for their performance reviews. When they came back after the epidemic had worsened, would you rehire them?

And yet, the noise on the right has grown so deafening, they think they're winning. Republicans are as confident as Mitt Romney on election night. The hammer-locked Congress, led by the fearsome tag-team of "Blubbering John" Boehner and Mitch "The Obamacare Assassin" McConnell, don't even realize that their strategy of destroying the president at the expense of the country hasn't worked. Even after Obama's reelection and Eric Cantor's loss, they still didn't get the message and continued with their destructive agenda.

The goose-stepping Congressional Republicans have obstructed, delayed, blocked, and filibustered every single initiative offered by the president, costing countless numbers of desperately needed jobs, and now they want your vote. Republicans have loudly criticized the president for taking executive actions and then they leave town during an international crisis, abdicating their Constitutional responsibilities.

The British Parliament's debate was fascinating, but Congressman Bubba from Birmingham can't be called away from his fish fry. There are donors' hands to shake. Can you imagine if John McCain and Sarah Palin were elected in 2012? We'd be dropping nukes on the Kremlin screaming, "We're all Ukrainians now," although recent events have shown we may have used the Palin family fistfight diplomacy first.

While Obama was securing a unanimous vote by the UN Security Council to crack down on foreign fighters joining ISIS, only the second U.S. president in history to chair such a committee, right-wing media exploded in outrage over his salute to a marine while holding a coffee cup. Fox News went wild with indignation, even though this militaristic gesture of saluting while exiting a helicopter was initiated only 30 years ago by the Hollywood warrior, Ronald Reagan.

Then, the usual Fox suspects exulted at the resignation of Eric Holder, like the 7th Cavalry claiming a scalp, while vilifying the attorney general for his presumed "racial favoritism." Holder once said that when it comes to discussing matters of race, we are "a nation of cowards." His choice of words may have been combative, but he was right. Or, maybe half-right. We don't discuss race across color lines, but that never stopped the Caucasian Party from discussing it among themselves.

To believe the GOP, you'd think that roving gangs of displaced Acorn volunteers and welfare cheats were conspiring to vote under false names to steal the next election. Just listen to their rhetoric: A Fox News host said that Holder was, "one of the most dangerous ... men in America," who, "ran the Department of Justice much like the Black Panthers would." The morally bankrupt Dick Cheney claimed Obama "would much rather spend money on food stamps ... than defending our troops." And Old Faithful, Palin, telling a recent audience how to combat liberals who "scream racism just to end debate," uttered this gem: "Well, don't retreat. You reload with truth, which I know is an endangered species at 1400 Pennsylvania Avenue." Her verbal bomb fell about two blocks short of its target. For the sake of sane government, these right-wing obstructionists are richly deserving of being swept from office. If they can't win fairly, they cheat. They demand new documentation as a condition for voting, they restrict days and hours to make it difficult for the poor to vote, they gerrymander districts to ensure a Republican majority, and they lie. All the time.

In these dark days, what we are witnessing is the last gasp of white supremacy in this nation. That's what all this "we want our country back" stuff is about. But the GOP is willing to burn down the country club before they'll admit any of these mixed-race aliens into their midst. Largely based in the South, the Republican Party is now the last bastion of the old Confederate mentality. Regardless of who controls the Congress in 2014 or even wins the presidency in 2016, this is the last spasm of the philosophy of white entitlement.

Ultimately, leaders will come along who see the value of diversity and replace the agenda-driven, politicized, corporate-owned justices on the Supreme Court and restore honor to the term "public servant." No time soon, however. The Fox News demographic may be aging, but not fast enough. Die-hard viewers of the corporate propaganda outlet still think Obama is the anti-Christ.