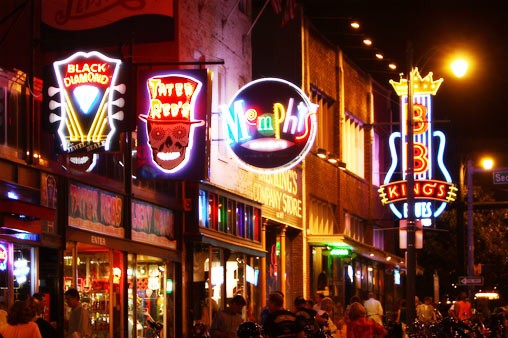 There was a time when Beale Street was known as the "Main Street of Negro America." Considering the city's past, black Memphians have every justification in believing that the institution of a midnight $10 cover charge is another attempt to discourage young black men from congregating. Quotable business owner, Randle Catron, of the Beale Street Development Corporation, claims the $10 fee discriminates against the underprivileged. "The majority of people that own places on Beale Street [are] white," Catron said, while preparing to file a federal lawsuit. "The majority of folks that are here late at night are black. Now, who do you think they're targeting?"

Ty Agee of the Beale Street Merchants Association said the cover charge is not about race: "It's strictly ... trying to help people, and not getting anybody else hurt ... There was no hidden agenda there." The cover charge was introduced by the merchants as a response to the video of a man lying in the street, beaten and bleeding, while a group of indifferent sub-humans stood around and took pictures. The merchants say the income from the cover charge will go to pay for additional security.

New Orleans has the rowdiest street in the nation, yet they still manage to employ enough police officers to maintain order and sweep the drunks off the street at closing time. It would seem that if this city were to continue to prosper from the legendary entertainment district, it's in their best interest to see it properly policed.

Still, charging people to walk on a public street, despite the possible necessity of its purpose, is still a reminder of the city's long history of lounge entrepreneurs attempting to keep white nightclubs from being overrun by fun-seeking black people. Conversely, the traditional "black" clubs of my youth, like the Club Paradise, were always welcoming to white patrons. Even in the insane disco '70s, white club owners tried numerous ways to discourage black clientele.

My band was hired to play at a hot disco in Whitehaven called the New Yorke Time that alternated live music with a DJ playing the latest hits. Considering the club was appropriating black music, dance, and culture, the managers seemed surprised when young, fashionably dressed African-American night-clubbers showed up to see what the fuss was all about. Concerned that his "white" club was becoming a "black" club, the owner instituted a series of punitive dress codes aimed at black customers.

They erected a sign-board at the entrance listing the new policies. The first rule was "No Hats," a must-have fashion accessory of disco attire. When they discovered that this wasn't achieving the desired results, they imposed a "No Platform Heels" policy. Even the Osmond Brothers wore platform shoes in the '70s. When customers objected, the bouncer-goons explained it was for insurance purposes, and that they didn't want to be held liable if someone should trip on the dance floor — as opposed to tripping-out on the dance floor, which the disc jockey encouraged. Ultimately, the club succeeded in chasing away customers, both black and white, and joined that dreaded category known as the "redneck" bar. Attendance plummeted and the owner took a well-deserved bath.

During the same time period, there was a music showcase on the top of the Mid-City Building at Union and Cleveland with a revolving stage. I saw Little Richard and Fats Domino play there in front of mixed-race audiences, before they ripped the whole thing out and turned it into a disco with blaring, throbbing music and a lighted dance floor on one side, and a more intimate lounge with acoustic music on the other. Since I was employed to do a solo show, I had no help hauling all the sound equipment to the top floor and hooking it up. The load-ins and tear-downs are what musicians get paid for — the music's free.

When I returned in the evening, the place was already packed with dancers gyrating to the disco beat. I was carrying my guitar toward the lounge when the manager called me into his office. I would mention him by name, but luckily for him, I've forgotten. "Listen," he directed, "I want you to go out there and play country music tonight." I was startled and objected: "That's really not what I do." "It's what you're gonna do tonight if you want to get paid," he proclaimed. I asked, "Why would you want me to play country music?" He stated bluntly, "There's too many blacks in here. Play country music, and they'll stop coming."

I was in a moral quandary. I needed the money, but I didn't want to participate in this asshole's racist scheme. When I took my seat onstage and looked out, my entire audience was black. I promptly launched into a six-song, Jerry "The Ice Man" Butler medley, ending with a version of "I Stand Accused" that so moved one lady that she sprang up from her table and ran toward the stage to give me a hug, but tripped and ended up knocking me and my guitar over backwards. I suggested that this might be a good time to take a break and got rousing applause from those assembled. When I walked by the manager's office, he called out to me, "Hey! You're fired." It was the proudest firing I ever endured.

These bullshit games have never worked, and regardless of intent, neither will the cover charge on Beale. Merchants have already reported taking a financial hit, although the tourists don't seem to mind paying the fee. Other methods are already under consideration to ensure safety on the street and beyond. All I hope is that someone doesn't get crazy and embarrass us all by erecting a giant billboard that says, "No Hats Allowed."